A Continuum from Halogen Bonds to Covalent Bonds: Where Do λ3 Iodanes Fit?
Previous Article in Journal

Non-Covalent Interactions Involving Alkaline-Earth Atoms and Lewis Bases B: An ab Initio Investigation of Beryllium and Magnesium Bonds, B···MR2 (M = Be or Mg, and R = H, F or CH3)

Halogen Bonding: A Halogen-Centered Noncovalent Interaction Yet to Be Understood

In addition to the underlying basic concepts and early recognition of halogen bonding, this paper reviews the conflicting views that consistently appear in the area of noncovalent interactions and the ability of covalently bonded halogen atoms in molecules to participate in noncovalent interactions that contribute to packing in the solid-state. It may be relatively straightforward to identify Type-II halogen bonding between atoms using the conceptual framework of σ-hole theory, especially when the interaction is linear and is formed between the axial positive region (σ-hole) on the halogen in one monomer and a negative site on a second interacting monomer. A σ-hole is an electron density deficient region on the halogen atom X opposite to the R–X covalent bond, where R is the remainder part of the molecule. However, it is not trivial to do so when secondary interactions are involved as the directionality of the interaction is significantly affected. We show, by providing some specific examples, that halogen bonds do not always follow the strict Type-II topology, and the occurrence of Type-I and -III halogen-centered contacts in crystals is very difficult to predict. In many instances, Type-I halogen-centered contacts appear simultaneously with Type-II halogen bonds. We employed the Independent Gradient Model, a recently proposed electron density approach for probing strong and weak interactions in molecular domains, to show that this is a very useful tool in unraveling the chemistry of halogen-assisted noncovalent interactions, especially in the weak bonding regime. Wherever possible, we have attempted to connect some of these results with those reported previously. Though useful for studying interactions of reasonable strength, IUPAC’s proposed “less than the sum of the van der Waals radii” criterion should not always be assumed as a necessary and sufficient feature to reveal weakly bound interactions, since in many crystals the attractive interaction happens to occur between the midpoint of a bond, or the junction region, and a positive or negative site. View Full-Text
Keywords: halogen bonding; noncovalent interactions; Type-I, -II and -III contacts; σ-hole concepts and controversies; MESP and electron density models; crystalline structures; IGM analysis halogen bonding; noncovalent interactions; Type-I, -II and -III contacts; σ-hole concepts and controversies; MESP and electron density models; crystalline structures; IGM analysis
►▼ Show Figures 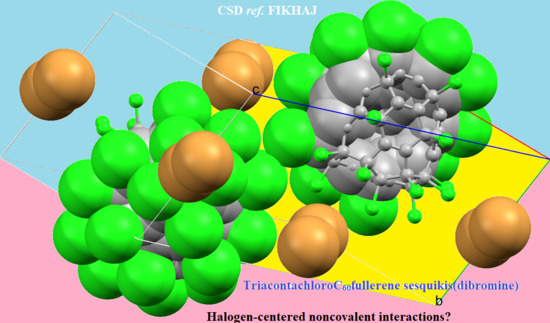