Tungsten is the heaviest element used in biological systems. It occurs in the active sites of several bacterial or archaeal enzymes and is ligated to an organic cofactor (metallopterin or metal binding pterin; MPT) which is referred to as tungsten cofactor (Wco). Wco-containing enzymes are found in the dimethyl sulfoxide reductase (DMSOR) and the aldehyde:ferredoxin oxidoreductase (AOR) families of MPT-containing enzymes. Some depend on Wco, such as aldehyde oxidoreductases (AORs), class II benzoyl-CoA reductases (BCRs) and acetylene hydratases (AHs), whereas others may incorporate either Wco or molybdenum cofactor (Moco), such as formate dehydrogenases, formylmethanofuran dehydrogenases or nitrate reductases. The obligately tungsten-dependent enzymes catalyze rather unusual reactions such as ones with extremely low-potential electron transfers (AOR, BCR) or an unusual hydration reaction (AH). In recent years, insights into the structure and function of many tungstoenzymes have been obtained. Though specific and unspecific ABC transporter uptake systems have been described for tungstate and molybdate, only little is known about further discriminative steps in Moco and Wco biosynthesis. In bacteria producing Moco- and Wco-containing enzymes simultaneously, paralogous isoforms of the metal insertase MoeA may be specifically involved in the molybdenum- and tungsten-insertion into MPT, and in targeting Moco or Wco to their respective apo-enzymes. Wco-containing enzymes are of emerging biotechnological interest for a number of applications such as the biocatalytic reduction of CO2, carboxylic acids and aromatic compounds, or the conversion of acetylene to acetaldehyde. View Full-Text
Keywords: tungsten enzymes; tungsten cofactor; aldehyde:ferredoxin oxidoreductase; benzoyl-CoA reductase; acetylene hydratase; formate dehydrogenase tungsten enzymes; tungsten cofactor; aldehyde:ferredoxin oxidoreductase; benzoyl-CoA reductase; acetylene hydratase; formate dehydrogenase
►▼ Show Figures 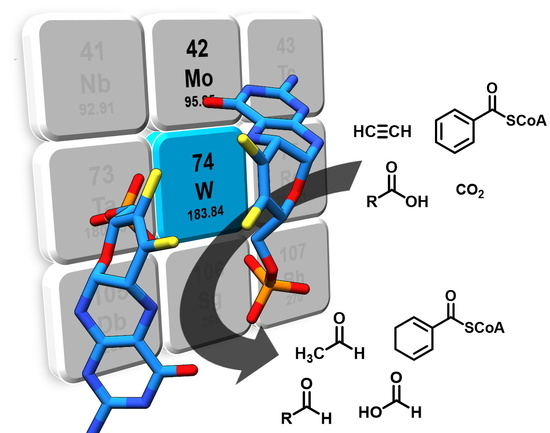