Heterospin systems have a great advantage in frontier orbital engineering since they utilize a wide diversity of paramagnetic chromophores and almost infinite combinations and mutual geometries. Strong exchange couplings are expected in 3d–2p heterospin compounds, where the nitroxide (aminoxyl) oxygen atom has a direct coordination bond with a nickel(II) ion. Complex formation of nickel(II) salts and tert-butyl 2-pyridyl nitroxides afforded a discrete 2p–3d–2p triad. Ferromagnetic coupling is favored when the magnetic orbitals, nickel(II) dσ and radical π*, are arranged in a strictly orthogonal fashion, namely, a planar coordination structure is characterized. In contrast, a severe twist around the coordination bond gives an orbital overlap, resulting in antiferromagnetic coupling. Non-chelatable nitroxide ligands are available for highly twisted and practically diamagnetic complexes. Here, the Ni–O–N–Csp2 torsion (dihedral) angle is supposed to be a useful metric to describe the nickel ion dislocated out of the radical π* nodal plane. Spin-transition complexes exhibited a planar coordination structure in a high-temperature phase and a nonplanar structure in a low-temperature phase. The gradual spin transition is described as a spin equilibrium obeying the van’t Hoff law. Density functional theory calculation indicates that the energy level crossing of the high- and low-spin states. The optimized structures of diamagnetic and high-spin states well agreed with the experimental large and small torsions, respectively. The novel mechanism of the present spin transition lies in the ferro-/antiferromagnetic coupling switch. The entropy-driven mechanism is plausible after combining the results of the related copper(II)-nitroxide compounds. Attention must be paid to the coupling parameter J as a variable of temperature in the magnetic analysis of such spin-transition materials. For future work, the exchange coupling may be tuned by chemical modification and external stimulus, because it has been clarified that the parameter is sensitive to the coordination structure and actually varies from 2J/kB = +400 K to −1400 K. View Full-Text
Keywords: aminoxyl; exchange interaction; spin crossover; structural transition; switching behavior; magneto-structural relationship aminoxyl; exchange interaction; spin crossover; structural transition; switching behavior; magneto-structural relationship
►▼ Show Figures 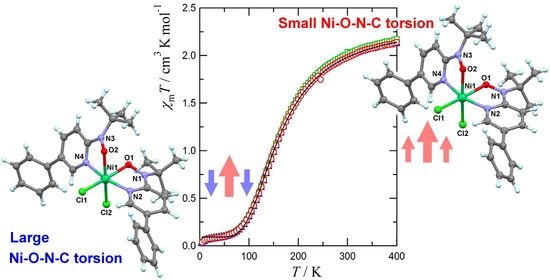