Management of Dental Avulsion Injuries: A Survey of Dental Support Staff in Cairns, Australia
Next Article in Special Issue

Special Care Dentistry and COVID-19 Outbreak: What Lesson Should We Learn?

Ankylosed Primary Molar in a Japanese Child with Hypophosphatasia

Hypophosphatasia (HPP) is a rare genetic disorder; affected patients may experience early exfoliation of primary teeth, especially anterior teeth. However, there have been few reports regarding longitudinal follow-up for primary teeth, especially posterior teeth, until their replacement with permanent teeth. Here, we describe a patient with HPP who underwent follow-up from 1 to 9 years of age. A 14-month-old boy was referred to our hospital with the chief complaint of early loss of primary anterior teeth. He was diagnosed with odonto-type HPP by his pediatrician, due to low serum alkaline phosphatase concentration and early exfoliation of primary teeth with bone hypomineralization. The patient experienced exfoliation of three additional primary anterior teeth by 4 years and 1 month of age. Partial dentures were applied for space maintenance; there were no problems regarding subsequent replacement with permanent teeth in the anterior region. However, the primary mandibular right first molar appeared to be submerged when the patient was 8 years and 3 months of age; the severity of submergence was greater when the patient was 9 years of age. The affected primary molar was considered to be ankylosed; it was extracted when the patient was 9 years and 4 months of age. Histopathological analysis of the tooth revealed disturbed cementum formation, which is a typical characteristic of teeth in patients with HPP. On the basis of these findings, we hypothesize that the disturbed cementum formation could lead to susceptibility to early exfoliation of anterior teeth, as well as occurrence of ankylosis involving posterior teeth.
Keywords: hypophosphatasia; ankylosis; disturbed cementum formation; early exfoliation; extraction hypophosphatasia; ankylosis; disturbed cementum formation; early exfoliation; extraction

A 14-month-old boy was referred to the Department of Pediatric Dentistry at Osaka University Dental Hospital with the chief complaint of early loss of primary teeth. Intraoral examinations revealed that the primary mandibular bilateral incisors and the primary mandibular left lateral incisor were missing. We previously described a patient with HPP who was diagnosed on the basis of early exfoliation of primary teeth [9]. The present patient exhibited a low level of serum alkaline phosphatase (192 IU/I); radiological examinations of the lower extremities and hands did not show metaphyseal irregularities indicative of rickets. Tissue-nonspecific alkaline phosphatase gene sequencing demonstrated a heterozygous c.550C > T (p.Arg184Trp) mutation. The patient’s condition was classified as odonto-type HPP, based on the results of these examinations.
The patient’s primary mandibular right lateral incisor spontaneously exfoliated when he was 2 years and 11 months of age; the primary maxillary left incisor also exfoliated when he was 4 years and 1 month of age. Partial dentures were applied for space maintenance; there were no problems regarding subsequent replacement with the corresponding permanent teeth (Figure 1A). However, the primary mandibular right first molar was appeared to be submerged when the patient was 8 years and 3 months of age; the severity of submergence was greater when the patient was 9 years of age (Figure 1B,C). The primary mandibular right first molar was about 1.5 mm submerged from the primary mandibular right second molar, and the periodontal ligament cavity was partially unclear (Figure 2A,B). The primary mandibular right first molar was considered to be ankylosed, although the corresponding tooth in the opposite quadrant did not show similar findings. Thus, extraction of the affected tooth was performed (Figure 2C). Histopathological analysis of the tooth showed disturbed cementum formation and acellular cementum, with wide and wavy ivory tubules and aplasia (Figure 2D). The patient’s postoperative course was good, and no particular complications were observed. The mandibular right mandibular first premolar showed a tendency to erupt (Figure 1D).

Early exfoliation of primary teeth is a well-known dental manifestation in patients with HPP [6,7,8,9,10]. Early exfoliation is presumably limited to the anterior region because of characteristics such as the time of eruption, tooth morphology, and number of roots involved. The primary incisors erupt first in primary dentition; these influence occlusal force. The primary incisors are also short; each exhibits a single, small root. However, there have been no reports regarding primary molars in patients with HPP who experience early exfoliation of primary incisors.
Here, we described a patient with HPP who completed a longitudinal follow-up period of approximately 10 years. During follow-up, the primary mandibular right first molar was submerged when the patient was 8 years of age; this submergence demonstrated further progression when the patient was 9 years of age. Therefore, the primary mandibular right first molar was considered to be ankylosed. We extracted a lower position of the patient’s primary teeth. Histopathological analysis of extracted tooth revealed disturbed cementum formation. Then, we confirmed the diagnosis as ankylosis. Thus, we presumed that ankylosis had been caused by disturbed cementum formation and altered occlusal force. The poor periodontal condition (due to disturbed cementum formation related to HPP) led to the absence of a root connection with alveolar bone by means of periodontal ligament. The excessive occlusal force gradually damaged this periodontal tissue and subsequently affected root adhesion to alveolar bone.
We suspect that the following mechanism contributed to the pathogenesis of ankylosis in this patient. In anterior teeth, lateral occlusal force is stronger than vertical force (Figure 3A); this lateral force can promote tooth exfoliation. Conversely, occlusal force acts vertically in the posterior region, such that affected teeth may resist exfoliation (Figure 3B). Therefore, ankylosis may occur in molars, but is less likely to occur in anterior teeth. Although this is the first report of ankylosis in a patient with HPP, the contributing factors are not fully clear and data for additional patients are needed; however, in patients with other severe types of HPP, exfoliation and ankylosis may not occur.
Notably, ankylosis was detected only in the primary mandibular right first molar. The opposite first molar was filled with composite resin due to caries; and the site of restoration was adjusted to reduce occlusion pressure. Alternatively, the partial denture clasp may have exerted excessive vertical force on the primary mandibular right first molar. The reason for local occurrence of ankylosis is unclear; thus, we plan to observe dentition exchange carefully in this patient.
Partial dentures are used for space maintenance in patients with HPP who experience early exfoliation [6,9]. In our patient, a mandibular denture was applied at the age of 4 years and a maxillary denture was applied at the age of 5 years; subsequent tooth replacement did not show any problems. We also considered the use of a band loop appliance for space maintenance after extraction of this ankylosed primary first molar; however, we did not apply this appliance because of the high likelihood of early exfoliation involving the mandibular right second molar. The patient’s orthodontist noted that the primary mandibular first and second molars would not move in the mesial direction because the mandibular first molar had fully erupted; distal movement of primary canines was desirable to resolve the patient’s tendency for anterior crossbite.
Tooth movement is more likely to occur in patients with HPP, because they exhibit weaker external force than the general population. Therefore, care is needed when performing an oral surgical procedure (e.g., tooth extraction) in these patients, to avoid application of excessive force to adjacent teeth.

This research was funded by a grant from JSPS KAKENHI, grant number JP15K11364.

The study was conducted according to the guidelines of the Declaration of Helsinki, and approved by the Ethics Committee of Osaka University of Graduate School of Dentistry (protocol code H29-E15-1 and date of approval 12 September 2017).

Written informed consent was obtained from the legal guardian of this patient for publication of this case report and accompanying images. A copy of the written consent is available for review by the Editor-in-Chief of this journal on request.

The authors hereby confirm that there are no known conflicts of interest associated with this publication and there has been no significant financial support for this work that could have influenced the findings presented. 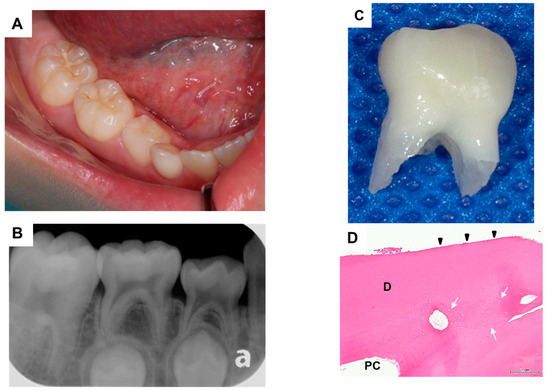 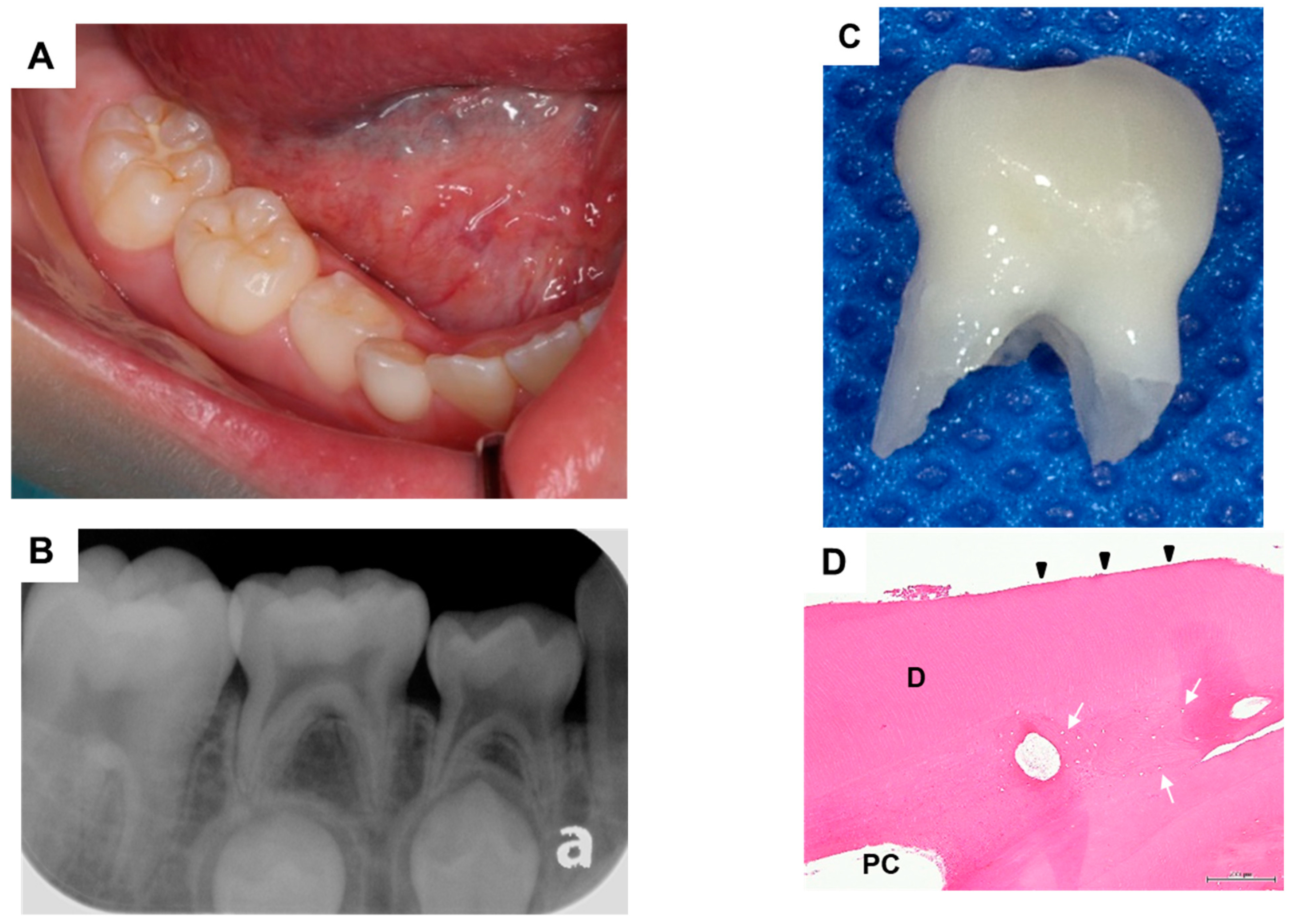