Ankylosed Primary Molar in a Japanese Child with Hypophosphatasia

Background/Aim: The aim of this study was to assess the knowledge of dental support staff in providing appropriate first-aid advice regarding dental avulsion emergencies. Methods: This study was reported according to the Strengthening the Reporting of Observational Studies in Epidemiology (STROBE) guidelines for cross-sectional studies. Dental support staff (includes dental assistants, administrative staff and other non-clinical staff) were contacted and data were collected from 50 private dental clinics across the Greater Cairns Area, Queensland, Australia. These data were collected through an online survey throughout 2020. Descriptive statistics and Pearson’s Chi-squared test was used to analyze the data and any associations between categorical outcomes. Results: This survey yielded a response rate of 34.1% with a margin of error of 10.3%. More than four-tenths of participants (42%) reported that they had received some form of dental avulsion management training previously. All but five participants (92%) denoted that they would immediately replant an avulsed permanent tooth. More than half of all participants would choose to rinse a soiled avulsed tooth with fresh milk (55%) and transport that tooth in fresh milk (65%) should they not be able to replant the tooth at the site. Almost nine in every ten participants (85%) expressed willingness to further their training in this area. Knowledge in replanting avulsed permanent teeth was found to be significantly impacted by gender, age, years of experience and participation in formal avulsion training. Male participants were found to be significantly more likely (p = 0.025) to replant a permanent avulsed tooth than their female counterparts. Participants who were 40 years of age and above were found to be significantly more likely to choose fresh milk to transport avulsed teeth (p = 0.0478). Older participants (p = 0.0021), alongside those who had greater years of experience (p = 0.0112) and those who had undertaken formal avulsion training (p = 0.0106) were all significantly more likely to express greater confidence in their ability to manage dental avulsion injuries. Participants who had previously received some form of education regarding avulsion injury management were also most likely to warrant further education and training in this area (p < 0.0001). Conclusion: This study demonstrated that dental support staff in the Greater Cairns Area seem to have a fair grasp of first-aid knowledge regarding the management of dental avulsion injuries. This result indicates that this knowledge has been picked up through years of experience, rather than a formal education. Despite this, one would expect people who work in the dental industry to be able to provide accurate and appropriate assistance during dental emergencies, hence, further training is warranted to ensure optimum patient outcomes.
Keywords: avulsion; dental trauma; emergency management; pediatric dentistry; public health dentistry avulsion; dental trauma; emergency management; pediatric dentistry; public health dentistry

Approval of this study was gained from the Human Research Ethics Committee of James Cook University (H8112). This study is reported according to the Strengthening the Reporting of Observational Studies in Epidemiology (STROBE) guidelines for the presentation of cross-sectional studies [22]. It comprised of a questionnaire that analyzed the knowledge of dental avulsion amongst DSS. The target population for this study was limited to DSS currently employed by dental clinics in the Greater Cairns Region, Far North Queensland, Australia.
Exclusion criteria included registered Australian general dentists, registered dental specialists and unemployed DSS. An online survey was created on Survey Monkey to email clinics and preserve social distancing protocols (COVID-19).
Data collection occurred over a period of one month starting from the 14 July 2020. A Yellow Pages search for dental clinics in the Greater Cairns region yielded 88 search results. These clinics were contacted via telephone and presented with a brief summary of the study in order to gain consent to their participation in the study.
Of the 88 clinics contacted, 50 clinics agreed to receive the online questionnaire. Furthermore, each clinic contacted was questioned on the number of DSS that were currently employed. Responses ranged from 2 to 4 DSS/clinic with an average of 2 DSS/clinic.
A detailed online three-part survey was developed for use in this study via SurveyMonkey. The online questionnaire was compared and modified from the questionnaire utilized by Cohenca et al. [23] for their study of specialized oral health professionals, general dentists and dental assistants. The questionnaire was further marked against the guidelines set by the IADT to validate its format [24]. It was further scrutinized by the designated research project coordinator and sent to a statistical specialist and clinical dentists in order to be validated. In addition to this, a pilot study was proposed, which consisted of at least five responses from DSS to assess the effectiveness of the online survey [25,26].
Data collection was de-identified thus maintaining the anonymity of the participants and preventing any form of bias. Questions adhered to the following themes:
All questions were close ended with multiple choice options given for participants to choose from. (Refer to Appendix A)

Both the Australian Health Practitioner Regulation Agency (AHPRA) and the Australian Dental Association (ADA) were contacted via email and telephone to enquire whether an official registry of DSS existed and was available to calculate sample size. However, we were informed that such a registry was not available for access. Due to this, the sample size was calculated relating to the average number of 2 DSS employed per clinic contacted in the Greater Cairns Region.
Based on the 88 dental clinics identified via Yellow Pages and contacted by telephone, a total of 176 DSS was estimated and a required sample size of 63 respondents was calculated. This accounted for a 95% confidence level, estimated proportion of 50% and a standard error of 10% [27].
However, upon contacting all available clinics, 38 of the 88 clinics either refused or failed to respond, leading to only 50 clinics consenting to receive the online survey. Within this sample group, a total of 60 responses were obtained. A total respondent rate of 34.1% was obtained, indicating a 10.3% margin of error throughout the results with a 95% confidence interval [28].
Descriptive statistics were used for analysis of raw data collected from the survey. Univariate associations between a categorical outcome and the variables under consideration were evaluated using Pearson’s Chi-squared test. A cut-off of p ≤ 0.05 was considered to be statistically significant, with a 95% confidence interval. GraphPad Prism Version 8.0.0 for Mac (San Diego, CA, USA) was used to analyze the data.

Of the estimated 176 DSS from 88 dental clinics contacted, 60 responses were collected via online survey over a duration of one month. Of the 60 respondents, 88.3% were female and 11.67% were male (see Table 1). Most participants were in the 20–39-year age group (55%). The majority of the dental support staff reported to have 5–10 years (30%) or more than 20 years of experience (30%). Certificate III in Dental Assisting (48.33%) was the most common qualification amongst participants. Seven participants (11.67%) had higher qualifications of bachelor’s degree in Oral Health and 6.67% of the respondents had qualifications other than a certificate in dental assisting, overseas dental degree or a bachelor’s degree. Half of all participants worked full time, 18.3% part-time and 35% as casual employees.
Of those surveyed, 25 staff (41.7%) had received previous avulsion training and only 13 (21.7%) had been supplied with an educational brochure about the management of dental avulsion (refer to Table 2).
Amongst respondents, 55 (91.7%) understood the urgency for immediate dental treatment and were aware of the need to replant permanent teeth (Table 3). Further questions were asked to assess the general knowledge about avulsion and its management as shown in Table 3 and Table 4. Most participants (55%) responded appropriately, stating that a soiled avulsed tooth should be rinsed with fresh milk, while 30% participants stated that an avulsed tooth should be cleaned with the patient’s own saliva. The results showed that 53 respondents (88.3%) were aware that it was best to handle an avulsed tooth from the crown.
The percentage distribution of responses about knowledge on subsequent avulsion management is shown in Table 4. More than half of the participants (55%) responded that the use of a liquid medium would be the best transportation technique, while 35% chose to keep the tooth in the patient’s mouth between cheek and teeth. The most selected liquid medium used to transport an avulsed tooth was fresh milk (65%) followed by patient’s saliva (28.3%). Only 10 respondents (16.7%) considered themselves as being very confident in managing dental avulsion, while the majority (66.7%) reported to have some degree of confidence. However, 16.7% were not confident at all (Table 5). Most respondents (86.7%) showed a willingness to receive further avulsion training.
Analysis of correlations between participants’ demographic information and their management of dental avulsion indicated that knowledge to replant an avulsed permanent tooth was related to their gender, age, years of experience in dentistry and exposure to dental avulsion training. Male participants were found to be significantly more likely (p = 0.025) to replant a permanent avulsed tooth. Participants who were 40 years of age and above were found to be significantly more likely to choose fresh milk to transport avulsed teeth (p = 0.0478). Older participants (p = 0.0021), alongside those who had greater years of experience (p = 0.0112) and those who had undertaken formal avulsion training (p = 0.0106), were all significantly more likely to express greater confidence in their ability to manage dental avulsion injuries. Participants who had previously received some form of education regarding avulsion injury management were also most likely to warrant further education and training in this area (p < 0.0001).

This study found that DSS in the Greater Cairns region have a fair grasp surrounding first-aid knowledge of dental avulsion injuries. However, their knowledge was derived from years of work experience rather than avulsion training. This lack of formal education left most DSS feeling under confident in managing an emergency avulsion situation. To improve DSS’ confidence and proficiency in responding to avulsion, formal training and induction programs of DSS in tertiary institutions and public and private practices need to include comprehensive avulsion training. Furthermore, the distribution of informative posters/leaflets to these organizations will also help reinforce appropriate initial management and response to dental avulsion.

The study was conducted according to the guidelines of the Declaration of Helsinki and approved by the Ethics Committee of James Cook University (H8112).

Informed consent was obtained from all subjects involved in this study.

The authors would like to thank all participating practices and dental support staff who took part in this study.

The authors report no conflict of interest during the conduct of the study.

Please tick/cross or provide the most appropriate answer. 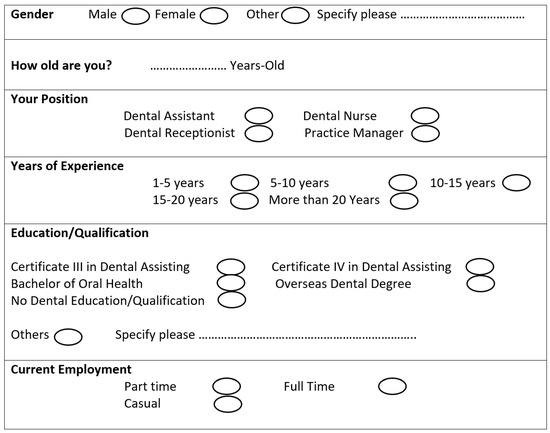 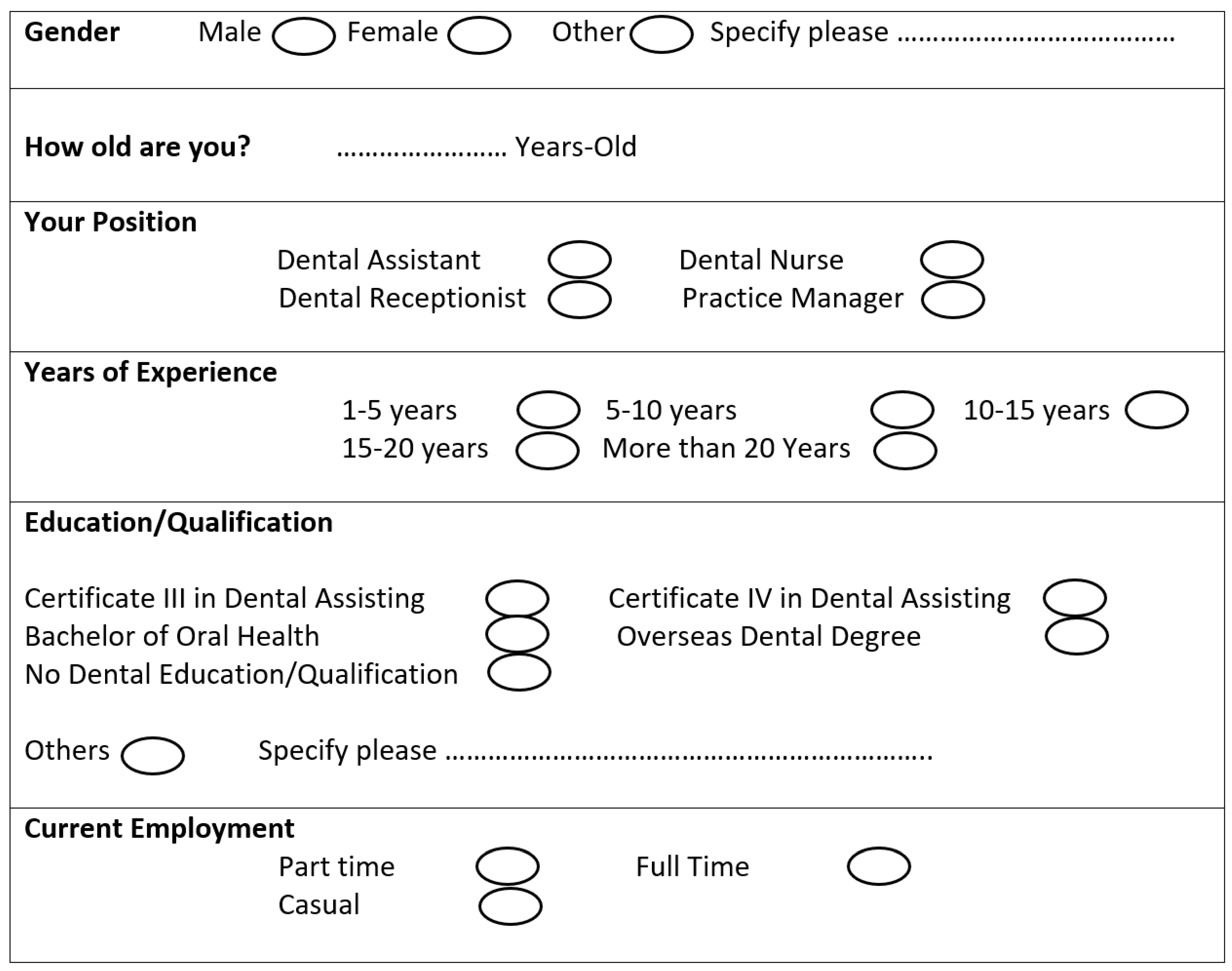 Appendix A.2. Knowledge and Management of Avulsed Tooth (Knocked-out Tooth from Socket)

In a normal working day, mother of 9 years-old child calls your clinic and reports her child just had a traumatic accident and one of the front upper teeth is knocked out.

Thank you for your time.