Tooth eruption is characterized by a coordinated complex cascade of cellular and molecular events that promote tooth movement through the eruptive pathway. During tooth eruption, the stratum intermedium structurally changes to the papillary layer with tooth organ development. We previously reported intercellular adhesion molecule-1 (ICAM-1) expression on the papillary layer, which is the origin of the ICAM-1-positive junctional epithelium. ICAM-1 expression is induced by proinflammatory cytokines, including interleukin-1 and tumor necrosis factor. Inflammatory reactions induce tissue degradation. Therefore, this study aimed to examine whether inflammatory reactions are involved in tooth eruption. Reverse transcription-polymerase chain reaction (RT-PCR) analysis revealed sequential expression of hypoxia-induced factor-1α, interleukin-1β, and chemotactic factors, including keratinocyte-derived chemokine (KC) and macrophage inflammatory protein-2 (MIP-2), during tooth eruption. Consistent with the RT-PCR results, immunohistochemical analysis revealed KC and MIP-2 expression in the papillary layer cells of the enamel organ from the ameloblast maturation stage. Moreover, there was massive macrophage and neutrophil infiltration in the connective tissue between the tooth organ and oral epithelium during tooth eruption. These findings suggest that inflammatory reactions might be involved in the degradation of tissue overlying the tooth organ. Further, these reactions might be induced by hypoxia in the tissue overlying the tooth organ, which results from decreased capillaries in the tissue. Our findings indicate that bacterial infections are not associated with the eruption process. Therefore, tooth eruption might be regulated by innate inflammatory mechanisms.
Keywords: HIF-1; IL-1; KC; neutrophil; tooth eruption HIF-1; IL-1; KC; neutrophil; tooth eruption

Normal organ and tissue development should involve a well-harmonized balance with the degradation of surrounding tissues [1,2,3]. During tooth eruption, there are significant tissue changes between the reduced enamel epithelium that covers the forming enamel and the oral epithelium. Eventually, the tooth erupts into the oral cavity after a direct connection between the reduced enamel epithelium and oral epithelium, as well as the subsequent epithelial cell degradation.
Tooth eruption involves a coordinated complex cascade of cellular and molecular events that promote tooth movement through the eruptive pathway. Dental follicles are crucially involved in this cascade since they produce numerous factors: tumor necrosis factor-α, transforming growth factor-β, interleukin-1 (IL-1), colony-stimulating factor-1 (CSF-1), and receptor activator of nuclear factor kappa B ligand (RANKL). TNF-α, CSF-1, and RANKL are released by dental follicle cells and stimulate the migration and differentiation of bone marrow precursor mononuclear cells into osteoclasts [4,5,6]. Moreover, mononuclear cells migrate into the overlying connective tissues of tooth organs, which are known as dental follicles, at tooth eruption onset [7,8,9,10] to form osteoclasts for resorption of alveolar bones. All these factors are induced by inflammation onset, which is often induced by infection. Further, most matrix proteinases, including matrix metalloproteinases (MMPs), are induced by inflammatory cytokines.
Extracellular matrix remodeling is a prominent feature of various biological processes, which range from wound healing and tissue development to tumor invasion and chronic inflammatory disorders. These processes are maintained by sequential regulation of inflammatory cytokine and chemokine expression in the local region without stimulation by infection.
There have been recent reports on the association of noninfectious innate inflammation with several diseases, including rheumatoid arthritis and lung diseases [11,12]. Innate inflammation is induced by noninfectious stimuli, including degradative products during cell death [13].
We previously demonstrated that inflammatory cells regulate organ development and homeostasis [14,15,16]. Further, we observed intercellular adhesion molecule-1 (ICAM-1) expression in the enamel organ during development [17,18]. ICAM-1 expression is regulated by inflammatory cytokines [19,20]. These findings strongly indicated that the inflammatory system also regulates noninfectious tooth eruption. During tooth eruption, there is a decrease in the number of blood vessels [21]. Hypoxia-induced factor-1 (HIF-1) is the central regulator for detecting cellular oxygen levels [22] and is among the essential inflammation regulators [23,24].
This study aimed to analyze the expression of HIF-1, as well as inflammatory cytokines and chemokines, and to examine macrophage and neutrophil migration into the tissues overlying the tooth organ.

The experimental protocols were reviewed and approved by the Animal Care Committee of Showa University (Shinagawa-ku, Tokyo, Japan). We purchased 10 pregnant BALB/c mice at 16-day gestation (E16) from Sankyo Laboratory Service Corporation (Tokyo, Japan) and maintained them under routine conditions at the Laboratory Animal Center of Showa University. We examined the mandibles from the mice at 7 days to 21 days postnatal (dPN). Twenty-one mice were used for histological examination (n = 7, for 7, 14, 19 dPN) and 18 mice were used for analyzing relative gene expression levels (n = 9, for 10, 14 dPN).

The mice were anesthetized with isoflurane and euthanized with cervical dislocation. Regarding histological and immunohistochemical studies, the mandibles were dissected from the mice and fixed using 4% paraformaldehyde for 6 h at 4 °C. After decalcification using 10% ethylenediaminetetraacetate for 2 weeks at 4 °C, the specimens were embedded and frozen in the optimal cutting temperature compound (Sakura, Torrance, CA, USA). Sagittal serial frozen sections that were parallel to the long axis of the first molars were cut (10-μm thick) and placed on glass slides. Every third section underwent hematoxylin and eosin staining and was evaluated through light microscopy to determine the suitable tooth organ region for assessment. The remaining sections were processed for immunohistochemical evaluation.

At 7 dPN, the inner enamel epithelium of the first mandibular molar tooth organ differentiated into the secretory stage of ameloblasts and secreted enamel matrix on the dentin surface (Figure 1a). The stratum intermedium was formed on secretory ameloblasts. None of the cells of the enamel organ expressed ICAM-1 (Figure 1a). At 14 dPN, the stratum intermedium structurally changed to the papillary layer concomitantly with ameloblast differentiation from the secretory-maturation stage. There was critical ICAM-1 expression on the papillary layer cells (Figure 1b, arrowheads). At 19 dPN, the crown tips were exposed to the oral cavity. There was strong ICAM-1 expression in the papillary layer (Figure 1c,d, arrowheads) and blood vessels surrounding the enamel organ (Figure 1d, arrows).

We observed remarkable modification of the tissue overlying the first mandibular molar tooth organ. Consequently, quantitative real-time PCR was used to compare inflammatory chemokine and cytokine expression at this interval.
There was significant augmentation of HIF-1α, IL-1β, MIP-2, and KC expression at 14 dPN (Figure 2). Immunohistochemical studies revealed KC and MIP-2 expression in the papillary layer and adjacent odontogenic epithelial cells over the tooth organs (Figure 3a,b, arrowheads and asterisk).

3.3. Migration of Macrophages and Neutrophils during Tooth Eruption

The tissue remodeling during the tooth eruption was regulated by the noninfectious inflammation induced from the onset of HIF-1α expression by the hypoxia of the tissue overlying the tooth organ. Our results indicated that the noninfectious inflammation might participate in not only the onset and/or the exacerbation of diseases but also the tissue development.

This research was partially supported by the Grants-in Aid for Scientific Research (24592777, 15K11022, and 20K18516) from the Ministry of Education, Culture, Sports, Science and Technology of Japan.

The study was conducted according to the guidelines of the Declaration of Helsinki and approved by the Institutional Review Board of the Animal Care Committee of Showa University (protocol code 12014 and 1 April 2020). 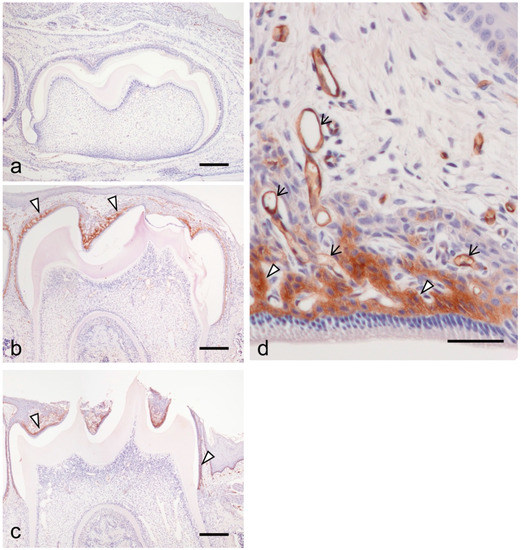 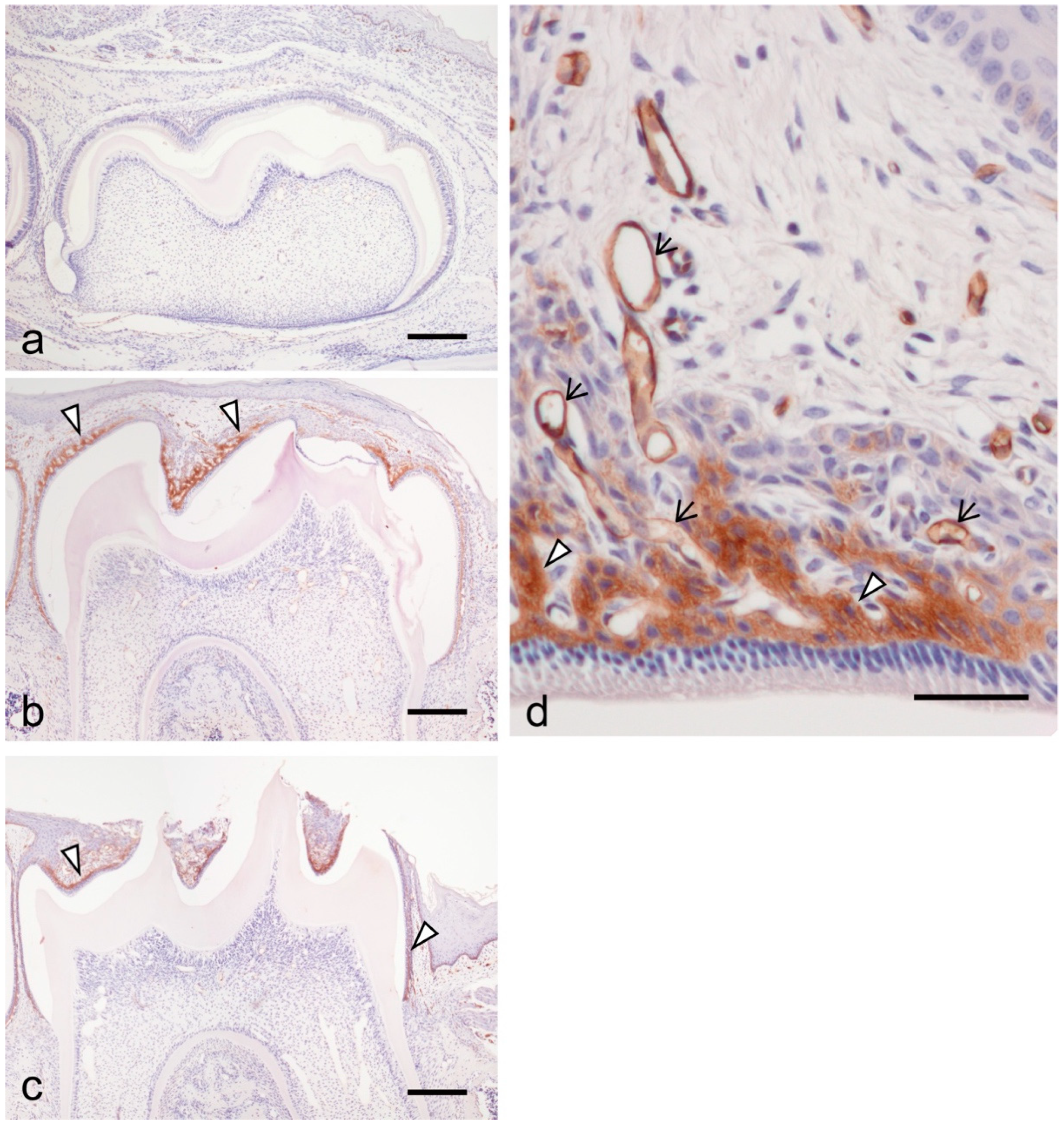 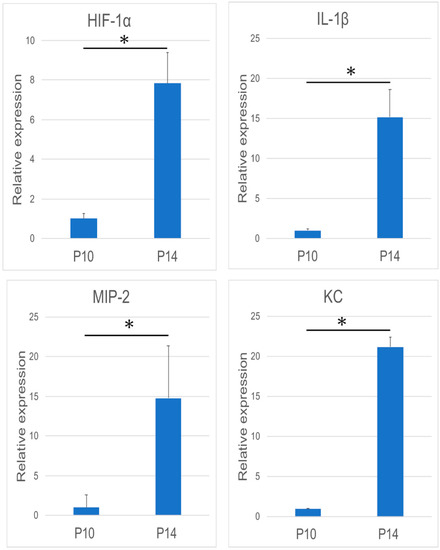 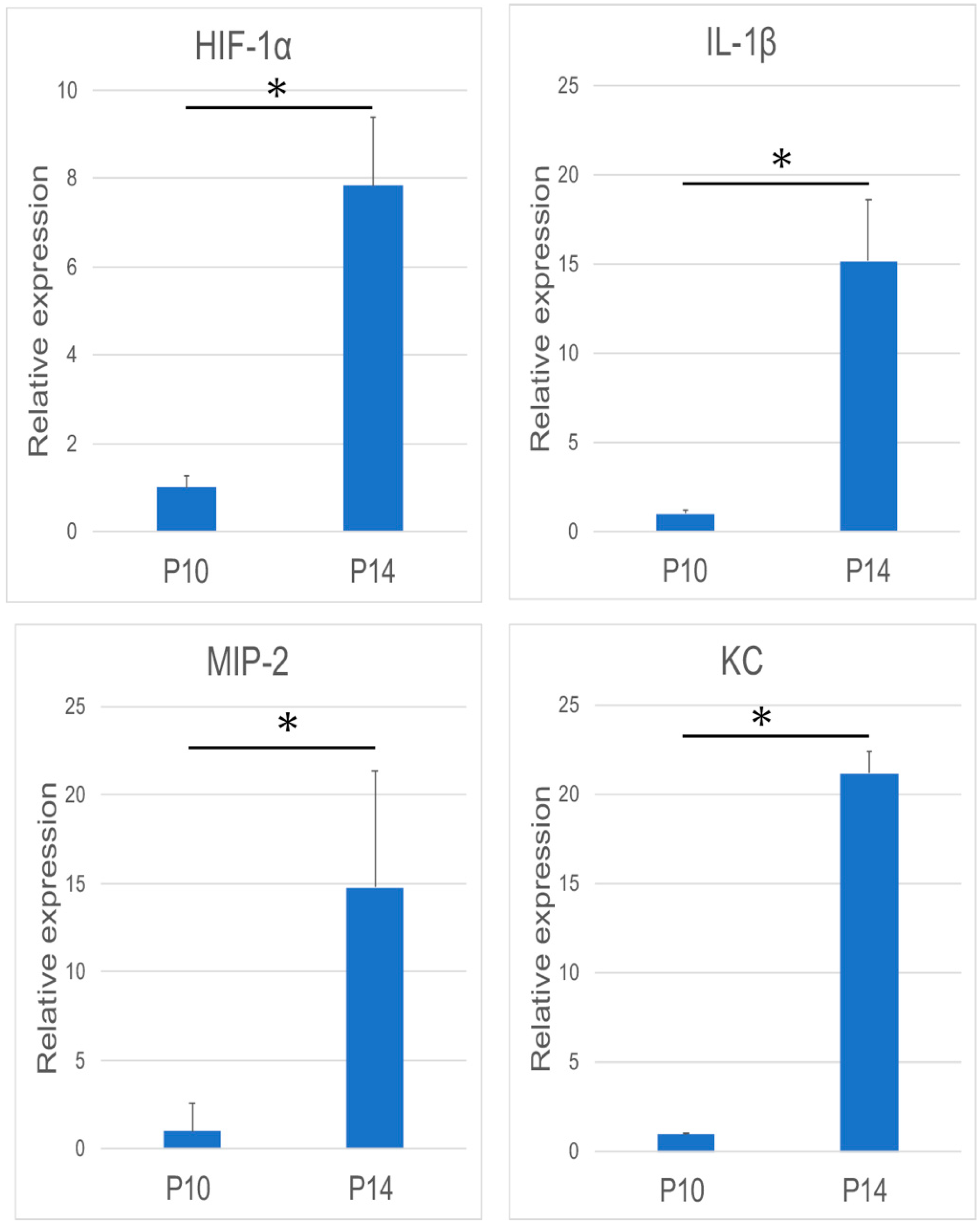 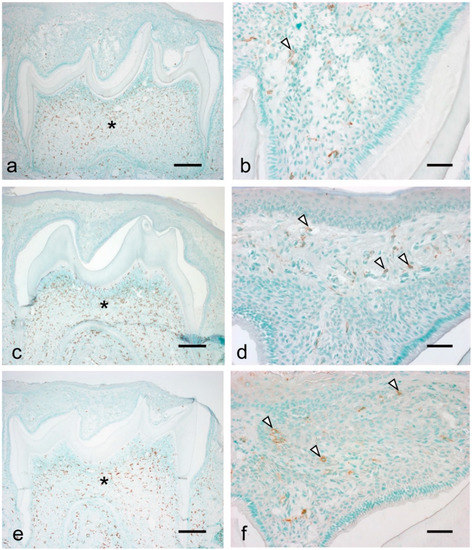 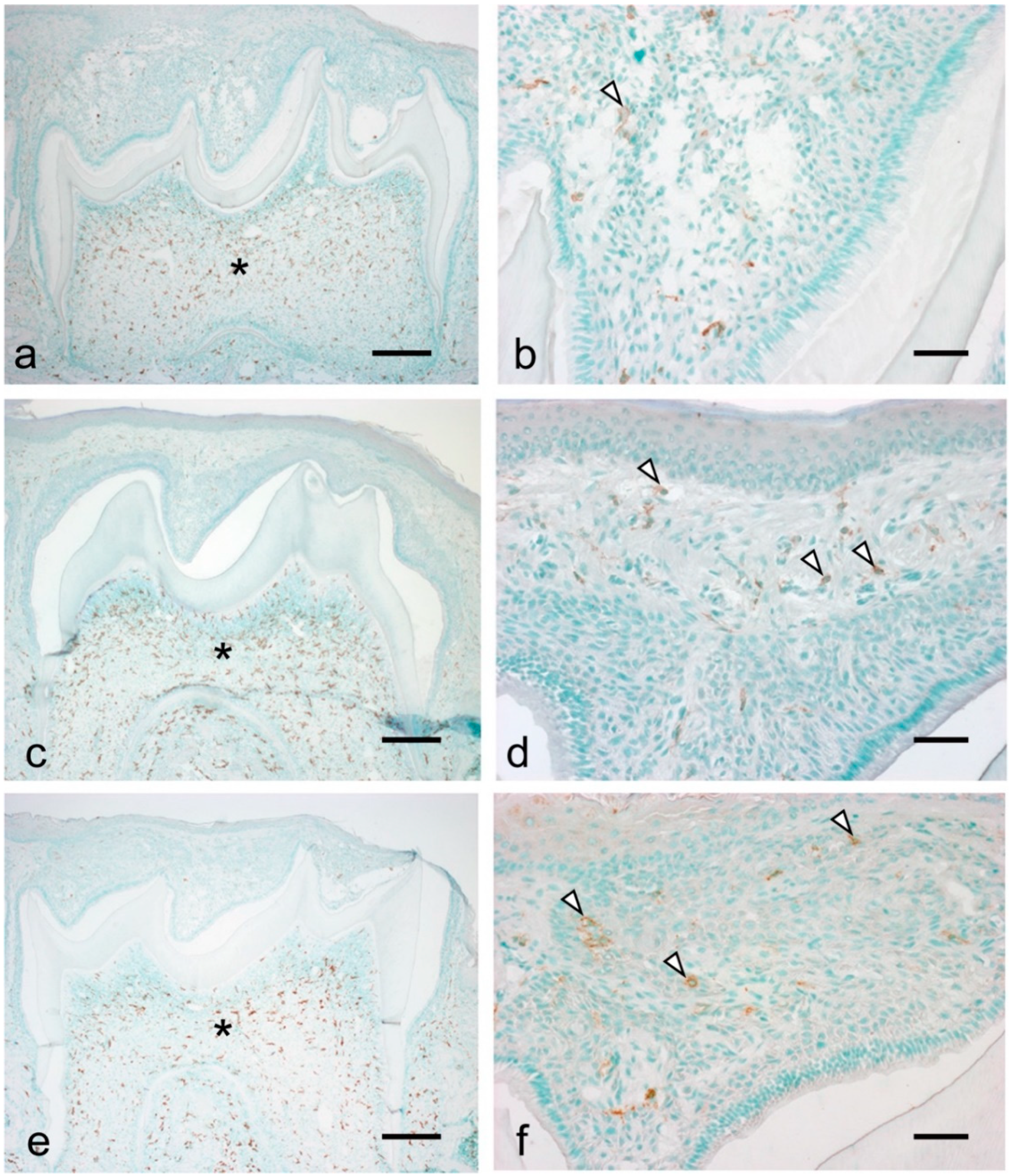 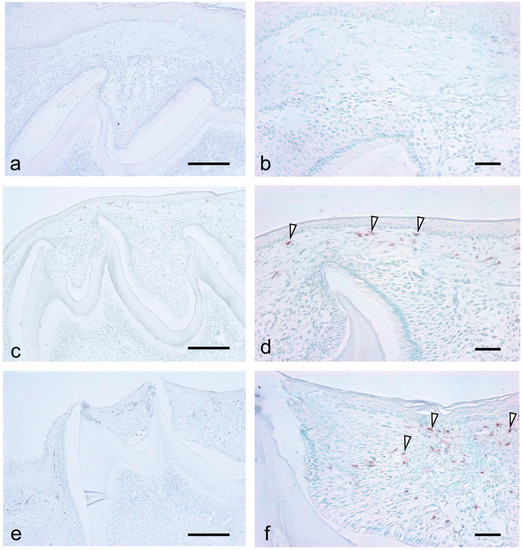 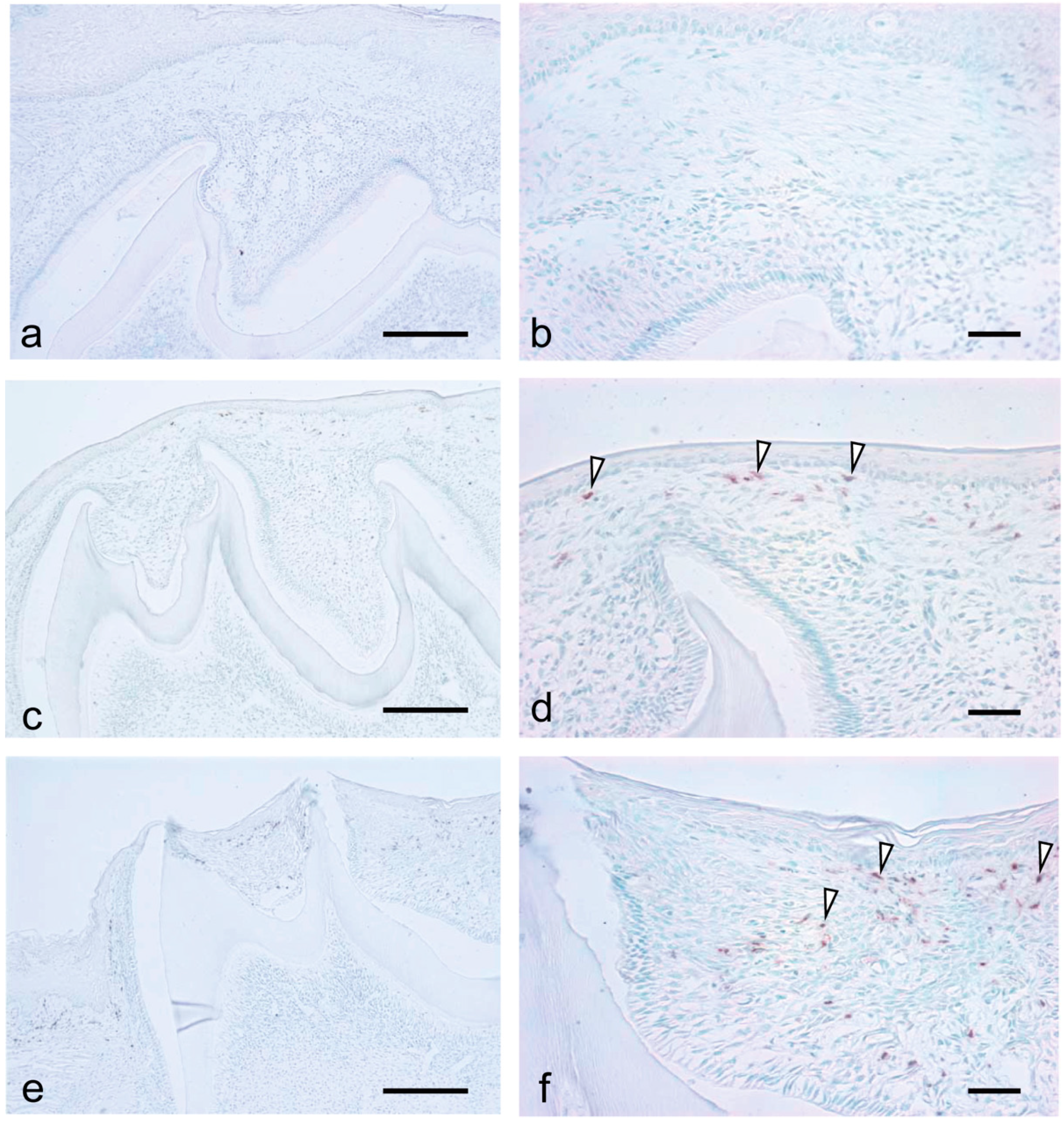