Resin composites are the natural choice of restorative material for most dentists due to their aesthetic and mechanical properties [1]. Advances in formulations and technology have increased their use. Resin composite materials are available with different matrix formulations and different filler types that influence both their handling characteristics and physical properties [2,3]. One of the most important features to consider when selecting a resin composite is surface characteristics, such as surface roughness and gloss. The surface texture of dental materials has a significant effect on plaque accumulation, discoloration, wear, and appearance of direct and indirect restorations [4]. Moreover, a smooth surface increases patient comfort as any change in surface roughness between 0.30 μm and 0.50 μm can be detected by the tip of the tongue [5].
Resin-based composites are composed of an organic matrix consisting of one or more monomers; inorganic fillers and coupling agents; and other components such as initiators, accelerators, photo-initiators, photosensitisers, and polymerisation inhibitors [6]. Technical advances in filler technology (such as nano-hybrid composites) and matrix formulations (e.g., Ormocer and Bis-GMA-free monomers) have broadened the scope of resin composites available to clinicians [7]. However, there are few studies evaluating the surface properties of ormocer-based composites and Bis-GMA-free composites [8,9]. This study was therefore undertaken to compare the initially achieved surface roughness and gloss values following multiple cycles of toothbrushing abrasion of two new composite materials, Admira Fusion (a nano-hybrid Ormocer based composite) and Venus Diamond (a nano-hybrid TCD-Urethane based composite) compared to Tetric EvoCeram (a nano-hybrid DMA based composite). These materials were selected because they are based on different resin matrices with the same filler type and very similar filler loads which will allow a comparison of the effect of different resin matrix compositions on surface characteristics while taking into consideration the filler effect.
The specific objective of this study was to evaluate and compare the changes in surface roughness and gloss of a DMA-free composite and a Bis-GMA-free composite with a dimethylacrylate-based composite before and after toothbrush simulation. The null hypothesis was that there is no significant difference in surface roughness and gloss before or after toothbrushing or between materials.

2.1. Materials Used in This Study

Using a polytetrafluoroethylene (PTFE) mould, cylindrical specimens with dimensions of 15 mm × 2 mm were prepared. For each material, five specimens (n = 15) were prepared and the sample size calculation was done based on the results of the study by O’Neill et al., [9] (When performing sample size calculations, we made a conservative assumption of an effect size of f = 0.80, this reflecting the very large effects commonly found in studies comparing dental materials—for example, conservative calculations based on the descriptive statistics in the study by O’Neill et al. [9], yield effect sizes well in excess of 1.00 for measures of both gloss and roughness. Thus, assuming an effect size of f = 0.80, desired power of 80%, alpha of 0.05, and a reasonably large correlation (r = 0.70) among repeated measures, use of GPower for mixed 5 × 3 ANOVA suggested a total sample size of 15 (n = 5 for each of the three materials compared). A glass slide 1–2 mm thick was placed at the bottom of the mould filled by the composite material. A Mylar transparent strip was positioned on the top of each composite material and a glass slide was placed on it with pressure applied to it before curing. The specimens were then cured for 20 s at a distance of 1 mm according to manufacturers’ instructions using an Elipar S10 LED (3M ESPE, St. Paul, MN, USA) hand-held light cure and each specimen was cured from different positions to ensure homogenous polymerisation. The light cure had an output of 1200 mW/cm2 and a wavelength range of 430–480 mm as stated by the manufacturer. Following the preparation, the specimens were stored dry in a plastic bag at 37 °C for 24 h before the finishing and polishing procedures [10,11].

All specimens were ground wet with abrasive P500 grit silicon carbide (SiC) papers to remove any surface irregularities and to standardise the baseline. The specimens were then stored in plastic bags at room temperature for 24 h before testing. A metal digital calliper (Tachlife DC04 digital calliper, Shenzhen, China) was used to measure the width and thickness of each specimen.
All specimens were finished and polished using blue Sof-LexTM finishing and polishing discs (3M ESPE Dental Products, St. Paul, MN, USA) with coarse, medium, fine, and super-fine grits for 30 s each (timed using a stopwatch). The polishing procedure was performed using a low-speed handpiece at a speed of 12,000 rpm with a constantly moving repetitive stroking action. To achieve smooth and glossy surfaces and to create identical specimens with standardised baselines, each specimen was polished with a new set of Sof-Lex discs. After polishing, all specimens were cleaned for five minutes using an ultrasonic water bath (Ultrasonic cleaner L & R 2014, Kearny, NJ, USA).

The surface roughness measurement was evaluated quantitatively using a profilometer (Talysurf CLI 1000, Taylor Hobson precision, Leicester, UK) which had a confocal point gauge based on the chromatic length aberration (CLA) principle (for non-contact high resolution measurement) [4]. The surface roughness of each specimen was evaluated before and after toothbrushing simulation by placing each specimen over a flat surface above cross-slides. It was then scanned by a confocal optical single point sensor with a 1 mm scanning length and a cut-off length of 0.25 mm. The mode of measurement was bidirectional gauge measurement, and the measurement speed was 500 μm/s. Data was obtained and analysed by TalyMap analysis software (Ultra version 6, Talymap Gold, Taylor Hobson, Leicester, UK) [12]. In this study, Ra was used as the mean measurement of the surface roughness as per ISO 4287.

The surface gloss of each specimen was recorded using a Novo-Curve gloss meter (Rhopoint Instrumentation LTD, Bexhill-on-Sea, UK). Gloss was measured by having a beam of light directed at an angle of 60° to the surface of the tested materials [13]; the light reflected at the same angle was then quantified. Prior to measuring the gloss, the device was calibrated against a black glass provided by the manufacturer with a reference value of 93.7 gloss units (GU). During the measurement of gloss, the specimens were positioned on the top plate of the gloss meter and covered with a black cover to avoid exposure to external light. Five measurements were recorded at the centre of each specimen, and the mean value was obtained for each specimen. Gloss measurements were recorded at baseline and after each cycle of toothbrushing simulation.

A custom-made toothbrush simulator based at the University of Manchester Dental Biomaterials Laboratory was used to simulate toothbrushing of specimens. Regular-headed toothbrushes (Oral-B 40 indicator, regular, Oral-B Laboratories, London, UK) were attached to the simulator holder and the toothbrush was positioned parallel to the specimen with the bristles in contact with the composite specimens. A commercial toothpaste (Colgate Total, Colgate-Palmolive, Guildford, UK) was mixed with water to prepare a slurry according to ISO/TS 1469-1 (2:1, water: toothpaste). The slurry was poured into the station of the toothbrushing machine and replaced for every four new specimens.
The applied load during simulated toothbrushing was 2.5 N as per the ISO standard specification (ISO 2813, 2014). A horizontal cross-toothbrushing technique was applied to each toothbrush head. A counter attached to the machine counted the number of movements at a speed of 78 cycles per minute. All specimens underwent 20,000 cycles. Surface roughness and gloss values were measured after 5000, 10,000, 15,000, and 20,000 cycles. Following each cycle of toothbrushing simulation and before surface roughness and gloss measurement were obtained, specimens were cleaned in an ultrasonic water-bath (Ultrasonic cleaner L & R 2014, Kearny, NJ, USA) to remove any potential slurry debris.

Data was analysed using SPSS software (Version 23.0, IBM SPSS Inc., New York, NY, USA). Normality of the data was tested by the Shapiro–Wilk test, which revealed normal distribution (p > 0.05). A mixed 5 × 3 ANOVA with main effects and interactions was applied to assess surface roughness and gloss values at a pre-set p value of 0.05. A simple effects analysis was used to interpret interactions where they existed and pairwise comparisons in the form of Tukey post hoc tests were performed to interpret main effects. One-way ANOVA was also performed to identify any significant difference in surface roughness between the materials at baseline. Pearson’s correlation analysis was performed to investigate the linear relationships between surface roughness and gloss. For all analyses, a p-value of <0.05 was considered to be statistically significant.

3.3. The Association between Surface Gloss and Roughness

The authors do not have any financial interest in the companies whose materials were used in this study. The authors declare no conflict of interests.

Products and equipment were all provided by the University of Manchester. 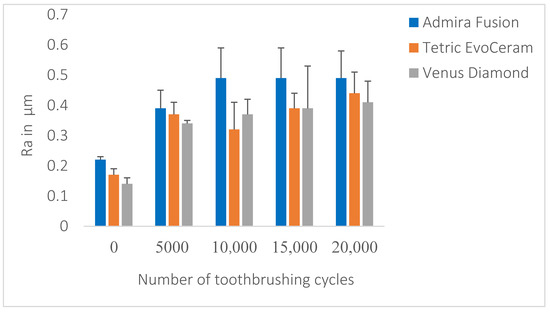 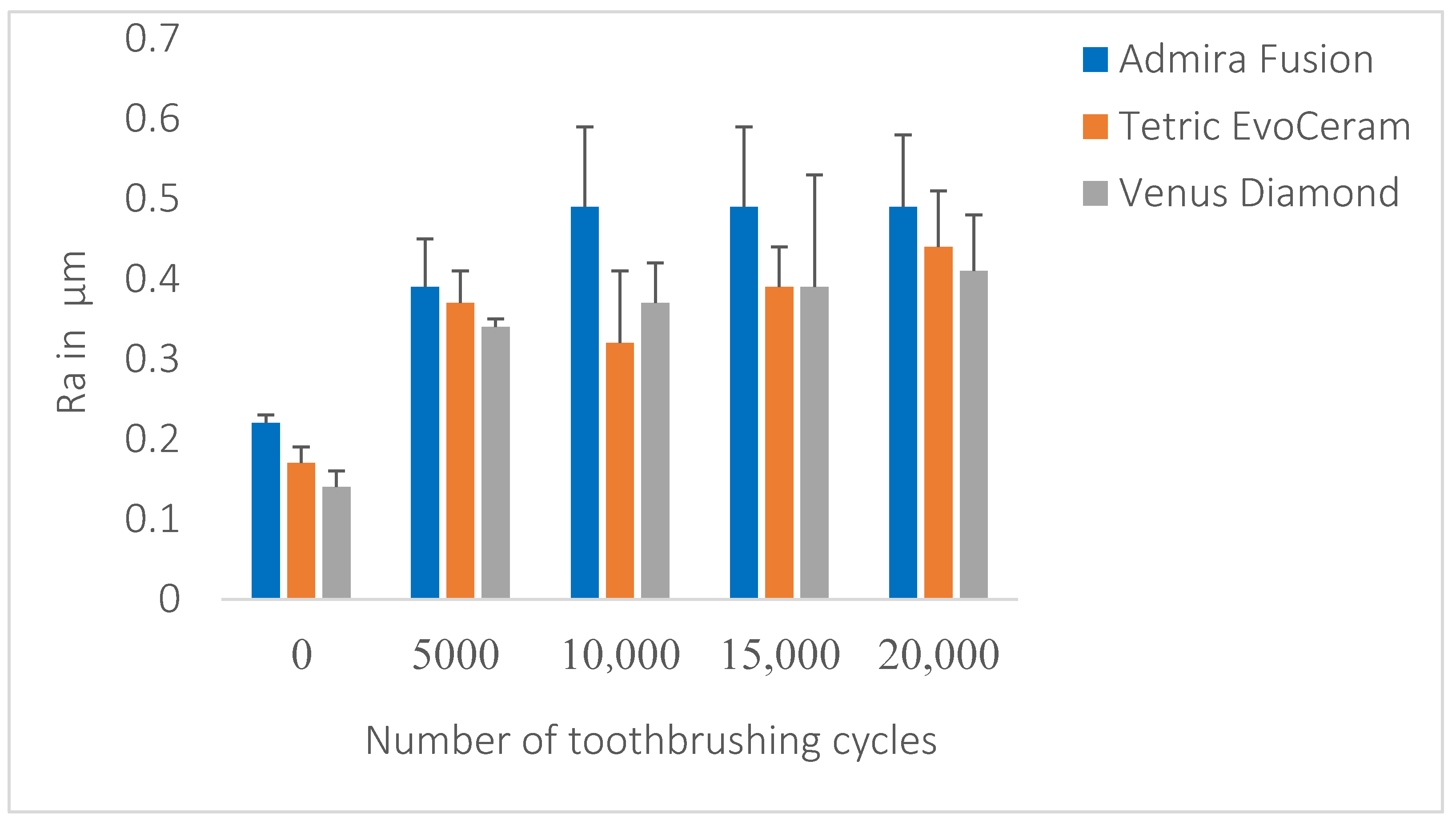