Considering the variations of the effects of PDLSC-CM among donor’s teeth, we used PDLSC-CMs taken from three PDLSC lines for each experiment in this study [22,23,24]. In order to establish PDLSC lines, PDL tissue was collected from 8 extracted premolars of healthy volunteers (14–28 years old, average 18 years old, 1 male, and 7 females). It was confirmed that all these premolars were free from any symptoms of periodontal disease. This study protocol was approved by the ethical committee for clinical research at Tokyo Medical and Dental University (TMDU) (#723) on 10 July 2013. All experiments were performed in accordance with the Ethical Guidelines for Medical and Health Research Involving Human Subjects by the Japanese Ministry of Health, Labour, and Welfare. PDLSCs were cultured from PDL tissues using the collagenase/dispase digestion method [13,25]. Cells were expanded in alpha minimal essential medium (αMEM) (Life Technologies, Carlsbad, CA, USA) with 15% fetal bovine serum (FBS), GlutaMAX (Life Technologies), and antibiotic-antimycotic solution (Life Technologies). To minimize the influence of inflammation of PDL and aging of the donor on data, we isolated PDLSCs from healthy PDL tissues from young donors, and cells with a passage number of less than four were used in this study. Multiple differentiation capacity of PDLSCs was confirmed prior to the experiments. For the induction of osteoblastic differentiation, the culture medium was changed to αMEM containing L-ascorbic acid (L-ascorbic acid 2-phosphate) (50 μg/mL) (Sigma, St Louis, MO, USA), dexamethasone (10−8 M) (Sigma), and β-glycerophosphate (10 mM) (Sigma) for 21 days. Calcium deposit was stained using Von Kossa staining kit (Polysciences, Warrington, PA, USA). For the induction of adipocyte differentiation, the adipocyte differentiation medium was used, according to instructions from the manufacturer (Lonza, Walkersville, MD, USA). After the induction, cells were fixed with 10% formalin solution (Sigma) and washed with phosphate-buffered saline (PBS) twice. Then, Oil Red O solution (Sigma) was added for 30 min, followed by rinsing plate with PBS. Photographs of culture plates were taken with Keyence BZ800 (Keyence, Osaka, Japan). Human gingival epithelial cells (HGE) (CELLnTEC, Berne, Switzerland), dermal fibroblasts (Lonza), osteoblasts (HOB) (PromoCell, Heidelberg, Germany), and umbilical vein endothelial cells (HUVECs, CELLnTEC) were purchased and used in this study. HUVECs expressing green fluorescent protein (HUVEC-GFP) were established and cultured, as previously described [26]. For the collection of CM, the culture medium was changed to low-glucose Dulbecco’s modified Eagle’s medium (DMEM, Life Technologies) at 70–80% confluence. After 48 h of incubation, culture supernatants were collected, and cells and debris were removed by centrifugation and filtration. CM was concentrated using ultrafiltration with a 10 kDa cut-off value (Millipore, Billerica, MA, USA).

Cells were seeded in 96-well plates (2500 to 5000 cells/well) for 18 h, and the culture medium was changed to each CM. Cell viability was examined 48 h after incubation with various conditioned media using a Cell Counting Kit (Dojindo, Kumamoto, Japan).

Cells were fixed in 4% paraformaldehyde in phosphate buffer and permeabilized in 0.25% Triton-X in PBS. Goat serum-PBS (10%) was used for blocking, and mouse anti-Ki67 antibody (Dako, Carpinteria, CA, USA) and goat anti-mouse IgG Alexa 488 (Santa Cruz Biotechnology, Santa Cruz, CA, USA) were used as the primary and secondary antibodies, respectively. Cells were observed under the fluorescence microscope Keyence BZ800 (Keyence, Osaka, Japan) after nuclear staining with 4′,6-Diamidino-2-phenylindole dihydrochloride (DAPI). Apoptosis was determined by the observation of nuclear condensation after DAPI staining [27]. The ratio of Ki67-positive cells and cells with nuclear alterations was calculated from the total nuclear counts and number of Ki67-positive and nuclear alteration cells.

First, 100 μL of growth factor-reduced Matrigel (BD Bioscience, San Jose, CA, USA) was added to a 48-well plate and solidified at 37 °C. After solidification, 2 × 104 HUVEC-GFP cells were seeded in 125 μL of endothelial cell growth medium (EGM)-2. Three hours later, the medium was changed to various CMs. Network formation was observed under a fluorescence microscope Keyence BZ800 (Keyence). The number of meshes was counted, as previously described [28].

Data are expressed as mean ± S.D. All statistical analyses were performed using StatView software (SAS Institute, Middleton, MA, USA). Analysis of variance (ANOVA) was first determined among the experimental groups. When ANOVA indicated significance, Fisher’s least significant difference (LSD) or Tukey’s/Kramer test was then conducted. For the comparison of the two groups, Student’s t-test was used.

3.1. Isolation and Characterization of PDLSCs

We isolated PDLSCs from the healthy extracted tooth (Figure 1A). After seeding of single-cell suspension of PDL-derived cells on the plastic dish, we observed colony-forming fibroblastic cells one to two weeks later (Figure 1B). These colony-forming cells demonstrated prominent calcium deposits, which were positive for von Kossa staining after in vitro induction of osteoblastic differentiation (Figure 1C). Additionally, these cells also exhibited Oil Red O-positive lipid accumulation in cytosolic space after the induction of adipocyte differentiation, as shown in Figure 1D. We used these colony-forming PDL cells with multiple differentiation capacity as PDLSCs.

3.2. Effect of CMs on the Cell Viability of Periodontal Tissue-Composing Cells

3.3. Effect of CM on the Apoptosis of HUVECs

It has previously been demonstrated that MSCs have anti-apoptotic functions [29,30]. Therefore, as a potential factor causing changes in the viability of HUVECs, the effects of various CMs on apoptosis of HUVECs were examined. HUVECs demonstrated a lower number of cells with nuclear condensation in PDLSC-CM compared to in Control-CM and Fibroblast-CM (Figure 3). The percentage of nuclear alterations in the PDLSC-CM group was as low as that of EGM-2, the growth medium of endothelial cells, which served as a positive control.

3.4. Effect of CM on the Cell Proliferation of HUVECs

3.5. Effect of CM on the Network Formation of HUVECs

To investigate the effects of CM on the angiogenic function of HUVECs, we examined the capillary-like network formation of HUVECs on Matrigel in the presence of various CMs. HUVEC-GFP formed capillary-like networks on Matrigel in the positive control EGM2 medium, and many mesh-like structures were observed (Figure 5). Mesh-like structures were hardly observed in Control-CM and Fibroblast-CM. On the other hand, it was found that HUVECs formed multiple mesh structures and that capillary-like structure formation was augmented in PDLSC-CM. These results suggest the angiogenic effects of PDLSC-CM on HUVECs.

In the present study, we found that HUVECs demonstrated lower apoptosis, higher viability, a Ki67-positive cell number, and capillary formation in PDLSC-CM, compared to in Fibroblast-CM. Additionally, an important angiogenic factor, VEGF, was detected at higher levels in PDLSC-CM than in Fibroblast-CM. These results strongly suggest that PDLSC-CM enhances angiogenesis by modulating the behavior of endothelial cells.
The EGM2, which was used as a positive control medium in this study, contained various growth factors, vitamins, and chemicals, such as bFGF, VEGF, ascorbic acid, and heparin, and was optimized for the various functionalities of endothelial cells in vitro. Our results demonstrated that in the EGM2 medium, HUVECs exhibited lower apoptosis and a higher number of Ki67-positive cells and network formation. We did not add exogenous factors into DMEM-based CM, including Control-CM, Fibroblast-CM, and PDLSC-CM. Therefore, HUVECs showed relatively higher cell death and lower cell proliferation and network formation in these CMs. However, among these CMs, PDLSC-CM demonstrated different trends of effects on HUVECs compared with those of Control-CM and Fibroblast-CM. This tendency was observed in the number of apoptotic cells and network formation, where PDLSC-CM and EGM-2 showed lower apoptosis and higher network formation, and Control-CM and Fibroblast-CM demonstrated opposite results. These results strongly indicate the angiogenic effects of PDLSC-CM.
PDLSCs are colony-forming, plastic adherent fibroblastic cells and have similar characteristics to bone marrow-derived MSCs, such as differentiation potential into osteoblasts, adipocytes, and chondrocytes in vitro and cell surface antigen expression profiles [13,29,31,32]. Additionally, it was demonstrated that MSCs release various angiogenic factors. In a previous study, we demonstrated that PDLSC-CM contained a number of important proteins in angiogenesis using protein array analysis [21]. In this study, we found a higher level of VEGF in PDLSC-CM than in Fibroblast-CM. VEGF is one of the most important angiogenic growth factors, which directly induces the growth and migration of endothelial cells [33,34]. The higher level of VEGF in PDLSC-CM may explain the enhancement of cell viability, Ki67-positive cell number, and network formation of HUVECs in PDLSC-CM compared to Fibroblast-CM.
Several previous studies have reported the angiogenic effects of PDLSCs. Bae et al. (2017) demonstrated that PDLSCs enhanced blood vessel formation by the transplantation of HUVECs in vivo, suggesting the supportive effect of PDLSCs in angiogenesis [35]. Additionally, Yeasmin et al. (2014) found that PDLSCs abundantly produced VEGF compared to SCs from human exfoliated deciduous teeth and bone marrow MSCs [36]. These findings suggest the angiogenic function of PDLSCs and are in agreement with our findings that PDLSC-CM enhances the proliferation and angiogenic potential of HUVECs.
We previously reported that the transplantation of PDLSC-CM into periodontal defects resulted in enhanced periodontal tissue regeneration compared to Fibroblast-CM transplantation [21]. As PDLSC-CM contains various angiogenic factors, it is assumed that angiogenic factors in PDLSC-CM may explain the enhanced regenerative process of periodontal tissues compared to Fibroblast-CM. Angiogenesis is an important step in wound-healing, and it has been postulated that the enhancement of angiogenesis may be favorable via the supplementation of oxygen and nutrients to healing tissues. Our findings showing higher cell viability, a Ki67-positive cell number, and network formation in PDLSC-CM suggest the higher angiogenic effect of PDLSC-CM, and the effect is a potential regenerative mechanism of enhanced periodontal tissue formation by PDLSC-CM transplantation compared to Fibroblast-CM. Additionally, now the clinical trials for periodontal regeneration by PDLSC transplantation are underway, and this study provides information regarding the regenerative mechanism by PDLSC transplantation.

In this study, we found that HUVECs exhibited higher viability, a Ki-67-positive cell number, network formation, and lower apoptotic cell death in PDLSC-CM than in Fibroblast-CM, and PDLSC-CM contained an elevated level of VEGF compared to Fibroblast-CM. In conclusion, PDLSC-CM has a higher angiogenic effect on endothelial cells than Fibroblast-CM, which may explain the enhanced periodontal tissue regeneration with the transplantation of PDLSC-CM.

The study was conducted according to the guidelines of the Declaration of Helsinki, and approved by the ethical committee for clinical research at Tokyo Medical and Dental University (TMDU) (protocol code #723 and date of approval, 10 July 2013).

The data that support the findings of this study are available from the corresponding author (K.I.) on reasonable request. The data are not publicly available due to ethical restrictions.

We thank Masako Akiyama (Tokyo Medical and Dental University) for the consultation of statistical analyses. 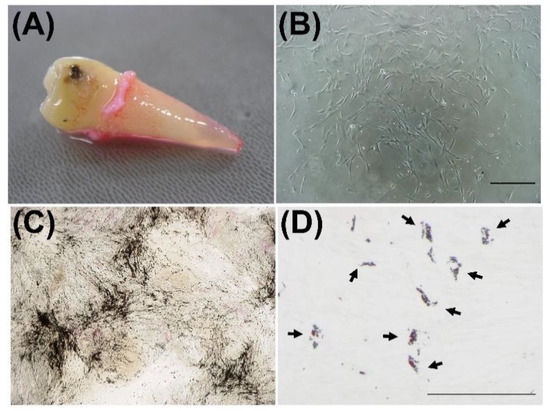 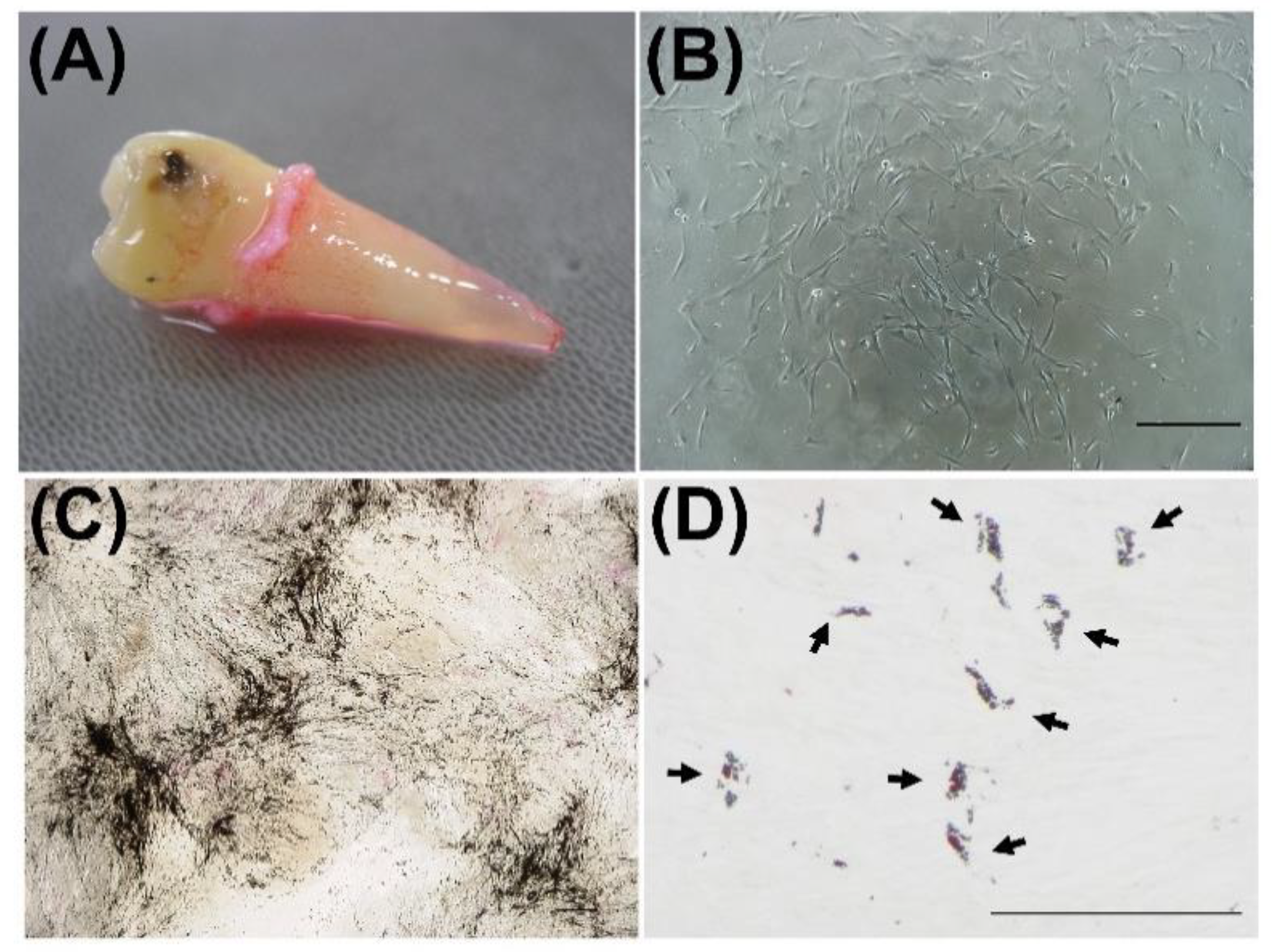 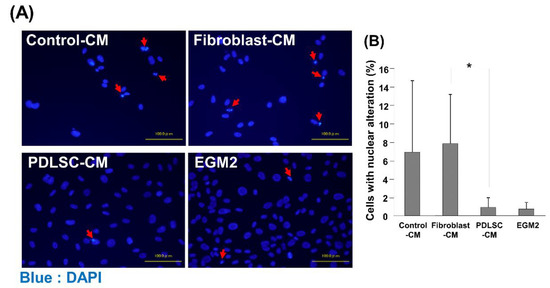 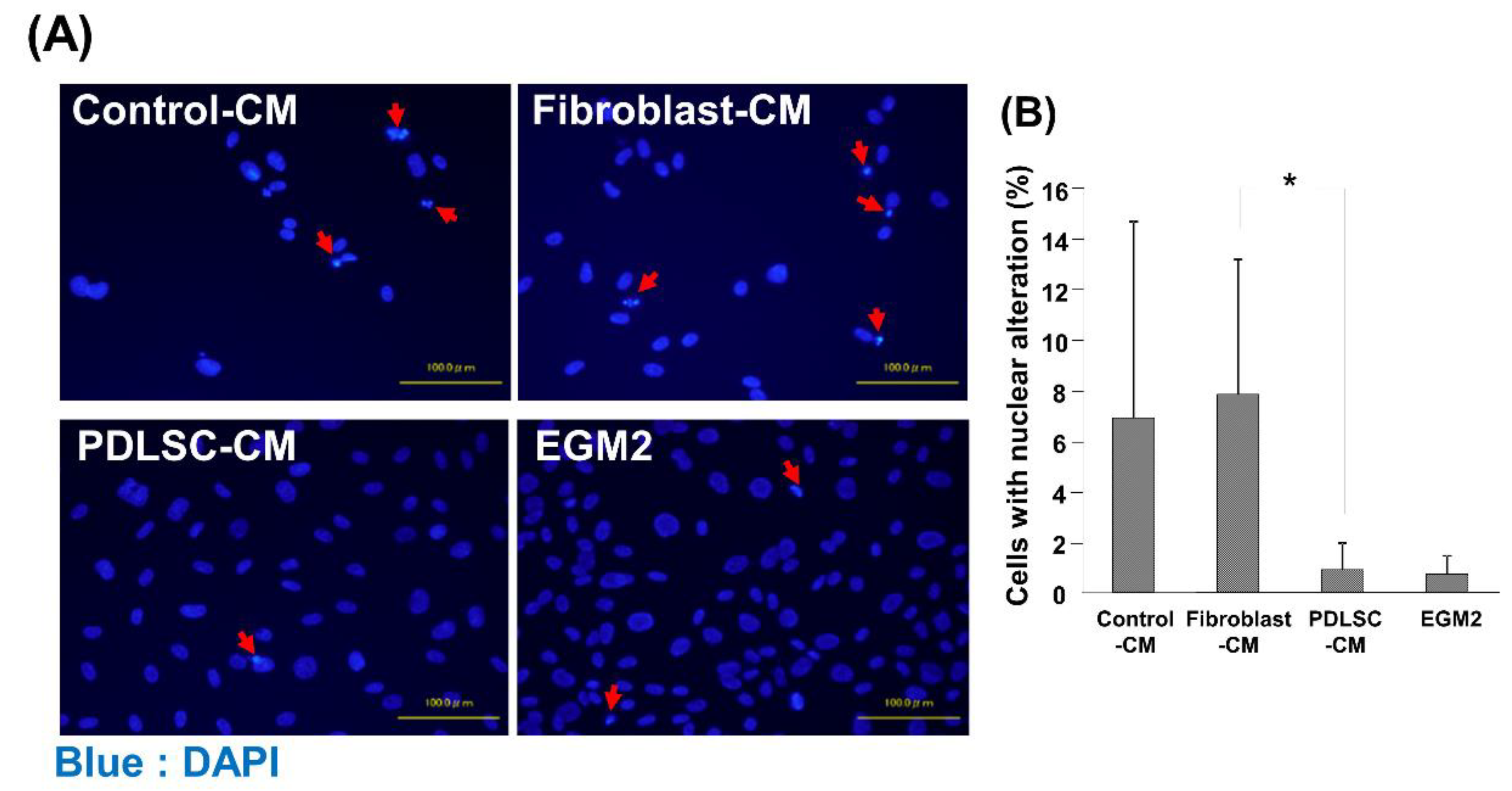 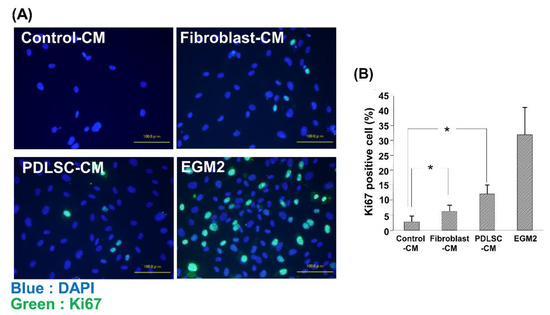 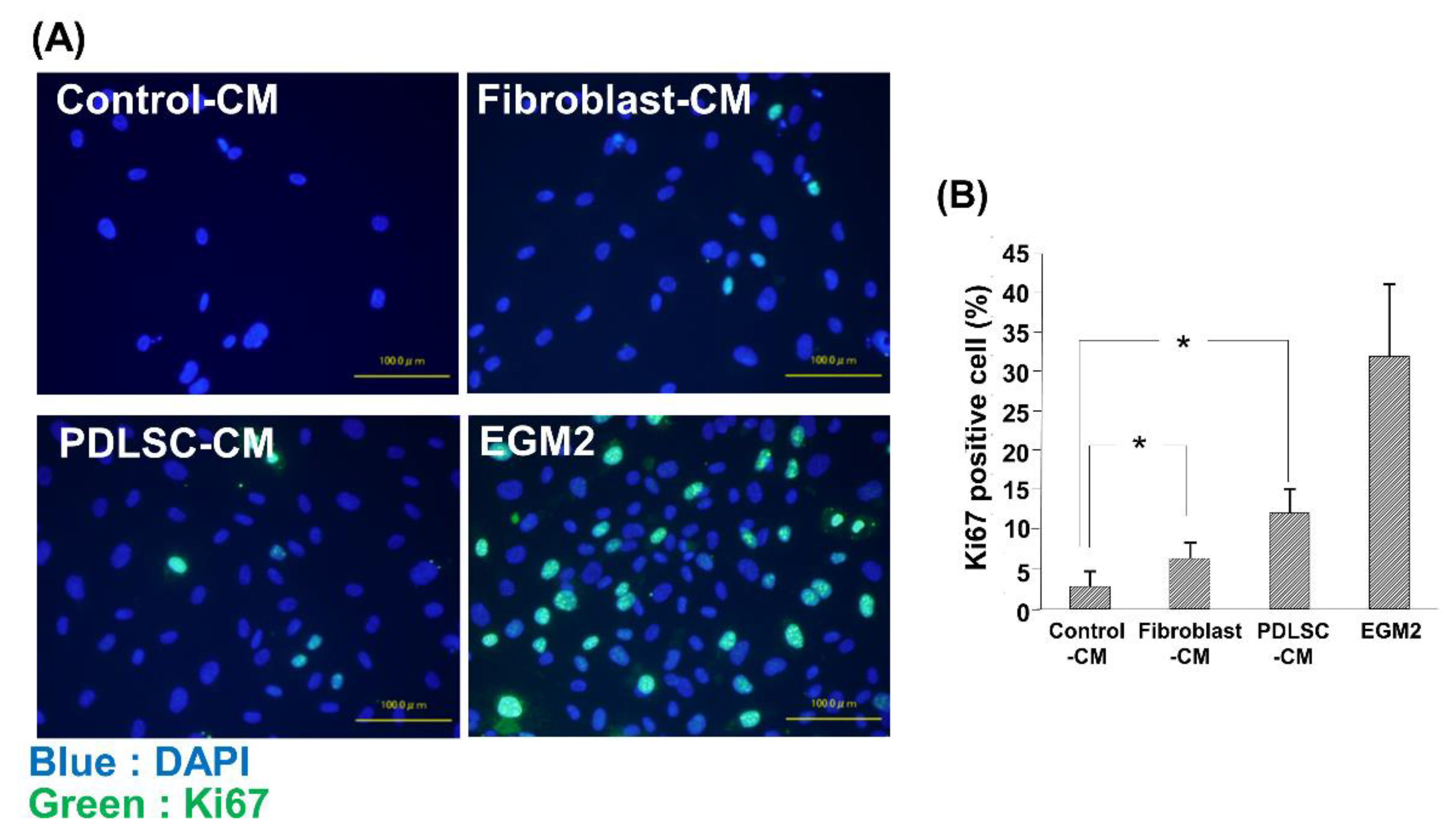 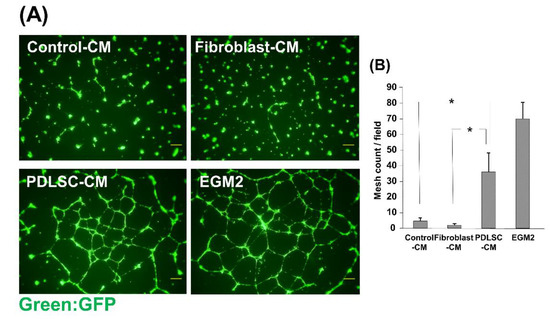 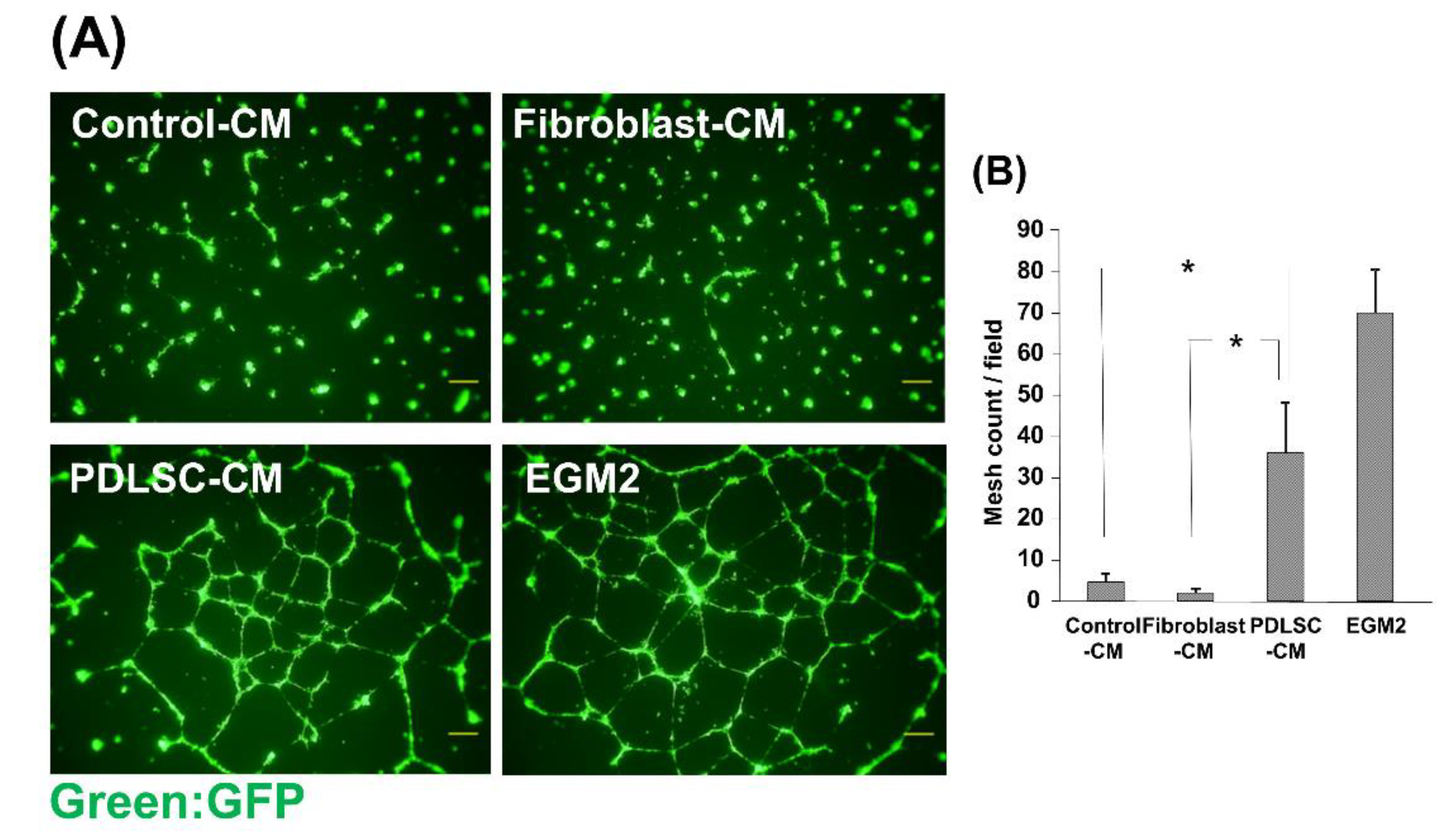 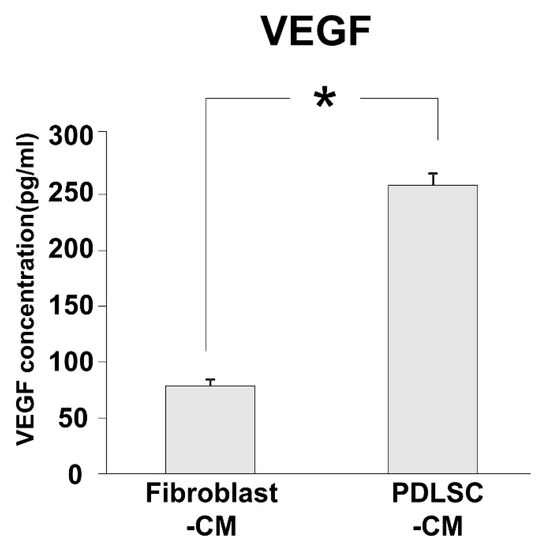 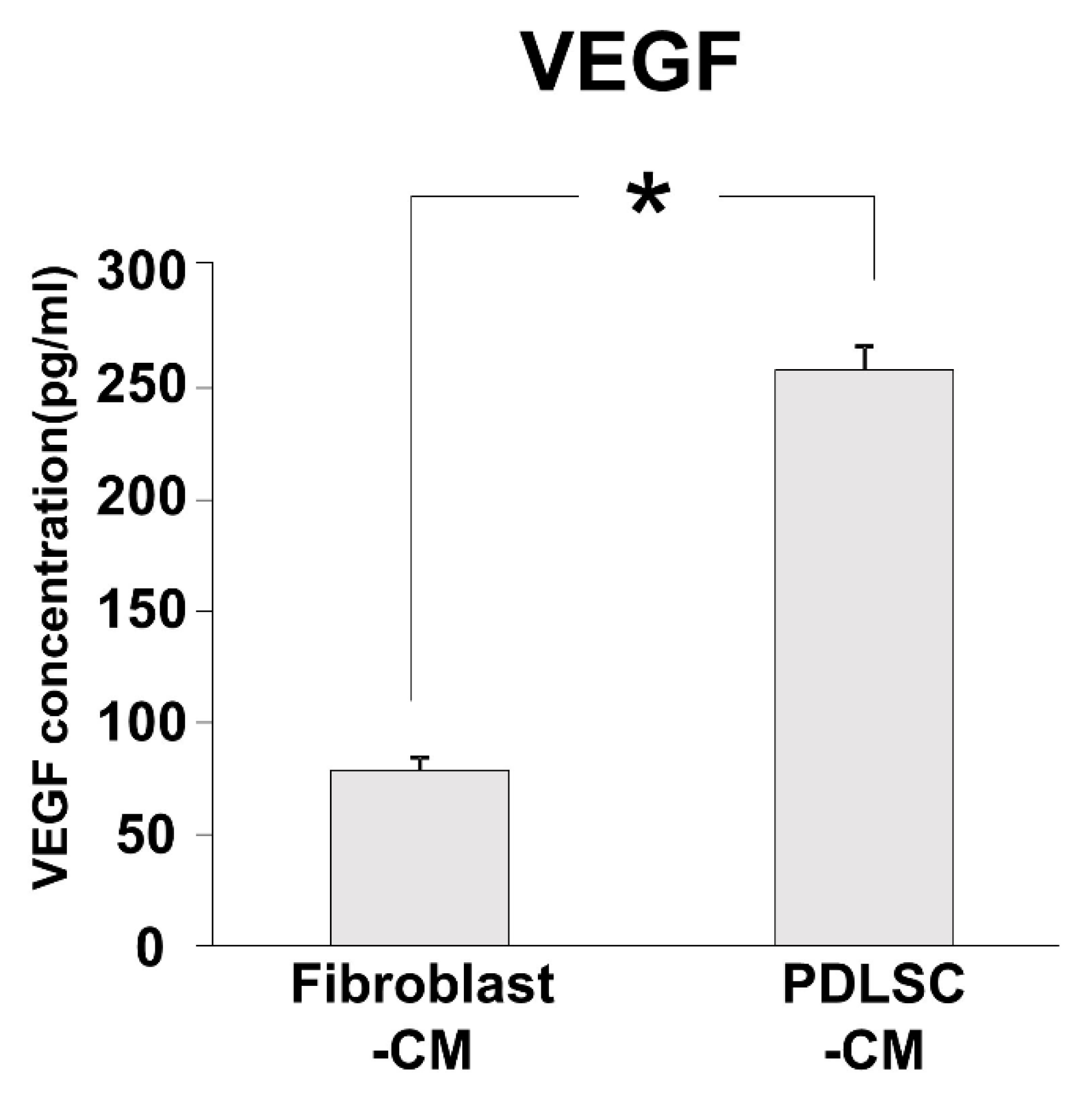