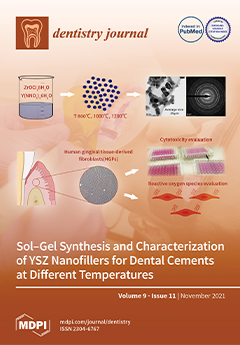 Cover Story (view full-size image): A simple and versatile sol–gel method allows the synthesis of yttria stabilized zirconia (YSZ) filler nanoparticles for dental applications. Produced at low temperatures and subsequently sintered, nano-YSZ could be a promising alternative to commercial ZrO2, possessing improved mechanical properties and stability. By altering the sintering temperature, it may also be possible to tailor nano-YSZ with appropriate size and crystallographic characteristics that meet the demands for nanofillers in dental cements with respect to composition, morphology, crystal structure, biocompatibility and related oxidative stress. View this paper
Previous Issue
Volume 9, October
Next Issue
Volume 9, December
We use cookies on our website to ensure you get the best experience. Read more about our cookies here.
Accept
We have just recently launched a new version of our website. Help us to further improve by taking part in this short 5 minute survey here. here.
Never show this again