A Short Form of the Children’s Experiences of Dental Anxiety Measure (CEDAM): Validation and Evaluation of the CEDAM-8
Previous Article in Journal

Hair Cortisol Concentrations Are Associated with Dental Anxiety during Pregnancy

Dental anxiety (DA) and hair cortisol concentrations (HCC) are associated with psychological symptoms and vary during pregnancy. We aimed to examine the association between HCC and DA at two points of pregnancy. Participants were pregnant mothers (n = 533) drawn from the FinnBrain Birth Cohort Study donating a hair sample at gestational week (gwk) 24 (n = 442) and/or at delivery (n = 176) and completed questionnaires on DA. Two groups, HCC1 and HCC2, treated as separate in the analyses, were formed according to the hair sample donation time i.e., gwk24 and delivery. 85 subjects were included in both groups. MDAS, EPDS, and SCL-90 were used to measure DA, depressive and anxiety symptoms, respectively, at gwk14 for the HCC1 group and gwk34 for the HCC2 group. The association between DA and HCC was studied with a binary logistic regression model, adjusted for anxiety and depressive symptoms, age, BMI, and smoking status. Individuals with high DA had lower HCC levels at gwk24 (OR = 0.548; 95% CI = 0.35–0.86; p = 0.009), but the association was not statistically significant at the delivery (OR = 0.611; 95% CI = 0.28–1.33; p = 0.216). The independent association between HCC and DA in pregnant women suggests that long-term cortisol levels could play a role in the endogenous etiology of DA. Further studies are however, needed. View Full-Text
Keywords: dental anxiety; hair cortisol; depression; general anxiety; FinnBrain dental anxiety; hair cortisol; depression; general anxiety; FinnBrain
►▼ Show Figures 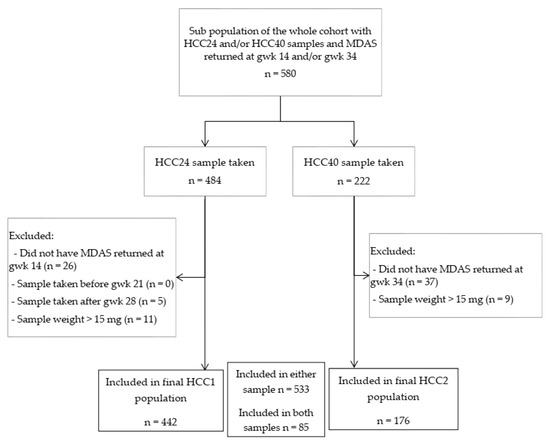