Root Fracture and Extrusive Luxation in Primary Teeth and Their Management: A Case Report
Previous Article in Special Issue

A 47-year-old Caucasian man, in good general, oral and periodontal health, presented with a non-bleeding bluish lesion on the back of his tongue, presumably due to an ecchymotic area of traumatic origin which was left untreated. The day after, other ecchymotic-type lesions on the mucous membranes of the cheeks and the upper lip, a bleeding lesion at the apex of the tongue and gingivorrhagia, along with petechiae on the back, scalp, lower limbs and feet, occurred, with rapid clinical deterioration, requiring immediate hospitalization. Oral, dermatological, and hematological evaluations lead to idiopathic thrombocytopenic purpura (ITP) diagnosis and hydrocortisone prescription, with a complete recovery in the next few days.The presented case of ITP, with early intra-oral manifestations, aimed both to emphasize the role of oral healthcare workers in theearly recognition of ITP, which may be especially relevant for those cases with extremely fast platelet depletion, high risk of internal bleeding and consequent potentially fatal complications, and in the differential diagnosis of the diseasethat may be aided by the diagnostic protocol described, and to provide dentists with recommendations on oral care management of cases of ITP, both in dental and multi-disciplinary settings.
Keywords: purpura; gingivorrhagia; idiopathic thrombocytopenia; oral bleeding; oral healthcare purpura; gingivorrhagia; idiopathic thrombocytopenia; oral bleeding; oral healthcare

Platelet disorders are commonly classified into hereditary, acquired from megakaryocytic causes, and secondary to an increase in either platelet destruction/loss (due to immune, toxic or hemorrhagic causes) or consumption (i.e., disseminated intravascular coagulation, Gasser hemolytic uremic syndrome, etc.) [1,2,3].
Classified among the hemorrhagic diseases dependent on platelets [4,5,6,7], purpura is potentially caused by thrombocytopenia (platelets circulating below 100,000/microliters or 150,000 mm3) [8] and by platelet disorders, such as platelet marginalization (altered distribution of the platelets in the body) [9], and mainly manifests with skin and mucosal lesions, although Central Nervous System bleeding and anemia may also be detected [10]. In particular, idiopathic thrombocytopenic purpura (ITP) occurs in the absence of toxic exposure and may be associated with low platelet levels. ITP, both in acute and chronic forms, is characterized by a regular or increased number of megakaryocytes in the bone marrow and a decreased platelet survival time, without splenomegaly [1,2,3,4,5,6,7,8]. Since, an immunological process involving an IgG auto-antibody against platelet antigens can be demonstrated in about the 85% of ITP cases, the term autoimmune thrombocytopenic purpura [11] has also been proposed. Platelet destruction, due to circulating auto-antibodies, determines the acquired thrombocytopenia and the related clinical manifestations, ranging from the frequently observed prolonged bleeding on injury [12] and muco-cutaneous bleeding [13], to the rare, but severe and potentially fatal, internal bleeding [12].
Muco-cutaneous lesions associated with ITP range from petechiae to ecchymosis and cutaneous hemorrhages. Petechiae are small, point-like, red macules that do not disappear on finger pressure and cannot be palpated, turning dark brown and later yellowish-green in color, over time. Ecchymoses are blue and black spots, identifying a larger area of hemorrhage, while linear hemorrhages, being due to trauma or pressure, are usually found in the lower limbs or in the upper section of the trunk, although can potentially arisethroughout the body. In addition, purpura frequently affects oral mucosa, with palatal petechiae, gingival bleeding and bruising on the tongue and the cheeks.
A clinical case of acute idiopathic thrombocytopenic purpura (ITP) in an adult subject with early oral manifestations is currently reported, aiming to emphasize the role of the dentist in the differential diagnosis and early recognition of ITP and to provide the oral healthcare workers with recommendations on dental management of ITP and hematologic disorders cases.

A 47-year-old Caucasian man, in good general health, presented to the family dental clinic, having observed a non-bleeding bluish lesion on the back of his tongue, during domiciliary dental care.
The intra-oral exam revealed a red/blue lesion on the tongue, presumably due to an ecchymotic area of traumatic origin (Figure 1). Healthy periodontal conditions and no signs of hard nor soft tissue disease were detected.
A detailed medical history was collected. The remote case history reported that the subject was born to term, his parents and the only brother were alive and healthy. No smoking habit; no hereditary or acquired pathologies, no drug therapies or blood transfusions were recorded; an unspecified allergy to nonsteroidal anti-inflammatory drugs, as well as the occasional appearance of traumatic lesions on oral mucosa, attributed to patient’s habit of eating quickly and voraciously, were referred. In the recent medical history, the occurrence of cough lasted about a week and treated with expectorants and thinners, was the only relevant fact preceding the appearance of the oral lesions was. Since no further signs of oral disease were evident and the patient did not refer other symptoms nor systemic diseases, the patient was discharged, and soft diet, careful oral hygiene and chlorhexidine-based mouthwash were prescribed.
The day after, the patient visited the family dental clinicagain, since, upon awakening, he presented with an increase in the number of oral mucosal lesions. The oral exam revealed gingivorrhagia, a bleeding lesion at the apex of the tongue as well as other ecchymotic-type lesions on the mucous membranes of the cheeks and the upper lip (Figure 2).
The body physical exam highlighted the presence of petechiae on the back and the scalp, on the lower limbs and on the back of the feet,(Figure 3).
Blood exams were prescribed, but in the next few hours, the clinical conditions suddenly deteriorated, requiring immediate hospitalization with a diagnosis of suspected purpura. The patient was hospitalized in fairly general clinical conditions, with a blood pressure of 125/75 mmHg, and with a blood count showing a very severe thrombocytopenia (Table 1).
Upon admission, the patient underwent a complete medical assessment with oral, dermatological and hematological evaluations. At the physical examination, the patient presented: petechiae and bruises in the oral cavity; petechiae in the lower and upper limbs, in the trunk and in the scalp; negative chest; painless and treatable abdomen; hypochondriac organs within the limits; absence of lymphadenopathies; hematuria.
Prednisone (75 mg × 3 administrations) and an intravenous Ig infusion (30 g × 5 days, 0.4 g/kg) were administered.
The day after the hospitalization, additional evaluations were carried out, which are described below along with the reported findings. A chest radiograph revealed a modest accentuation of the pulmonary texture on a hyperdiaphanous background, without evidence of infiltrative parenchymal lesions in progress, regular diaphragm in the profile, with free costophrenic sinuses, cardiac volume within limits. Electrocardiogram and cardiac enzymes were normal, with a blood pressure of 120/70 mmHg, a heart rate of 70 bpm and an oxygen saturation of 98%. The blood count, instead, showed values similar to the previous day.
Hydrocortisone (100 mg per day), antihistamine and gastric protector were added to the administration.
On the third day of hospitalization, the general clinical conditions improved and the platelet count roseto 34,000 per mm3. The oral exam also revealed an improvement of the mucosal lesions and the absence of spontaneous bleeding. At the physical body exam, the chest was always negative, the abdomen painless and treatable, with the liver at about 2 cm and the spleen at 1 cm from the rib arch, respectively. The abdominal ultrasound showed: physiological epatic and splenic sizes and echostructures, distended gallbladder, non-dilated intra and extra practical biliary tracts, normal caliber and course of the splenoportal axis and absence of lumbar aortic lymphadenopathy.
Hydrocortisone (100 mg per day), antihistamine and gastric protector were administered similarly to the previous day.
On the fourth day of hospitalization, a further regression of the oral lesions and disappearance of the hematuria were observed, along with negative chest, treatable abdomen, blood pressure and heart rate were normal.
The patient was discharged in good health on the fifth day, with a diagnosis of acute ITP and a hydrocortisone (100 mg per day) prescription. A complete recovery was achieved in the next few days (Figure 4).

Clinical procedures: A.L.; Writing—preparation of original draft: S.P., A.L.; Writing—review and editing: F.D.S. and L.S. All authors have read and agreed to the published version of the manuscript.

The study was conducted in accordance with the Declaration of Helsinki, and the protocol was approved by the ethics committee of: Ethics Committee Azienda Ospedaliero-Universitaria San Giovanni di Dio e Ruggid’Aragona approved by Protocol n. 21/2020 on 16 July 2020, confirmed by the resolution # 109 22 July 2020.

All subjects gave their informed consent for inclusion before they participated in the study. 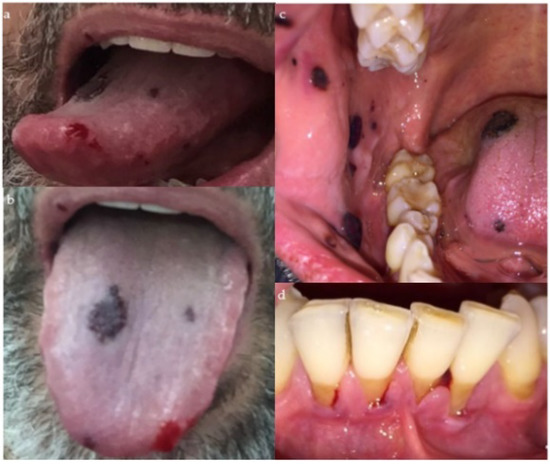 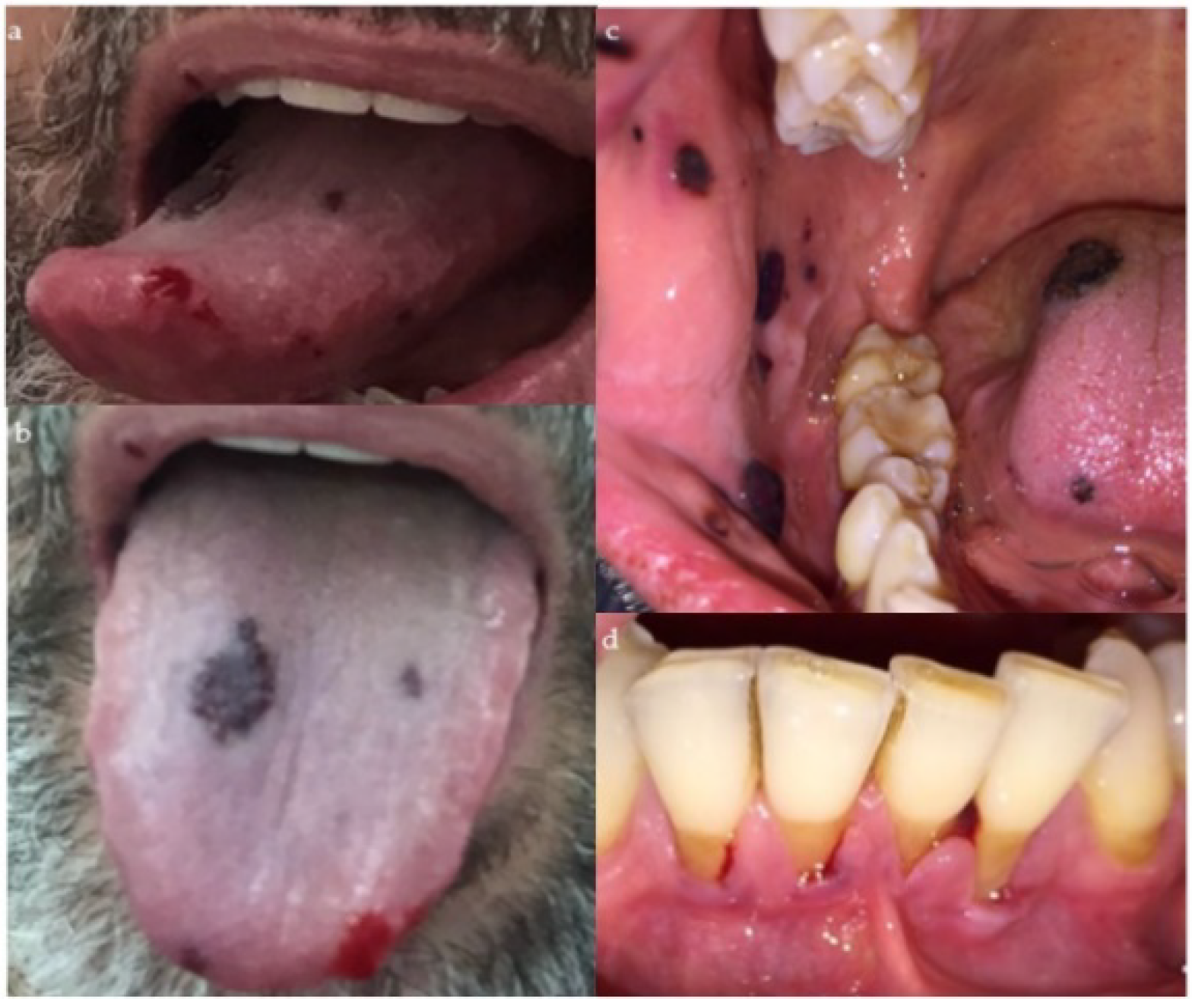 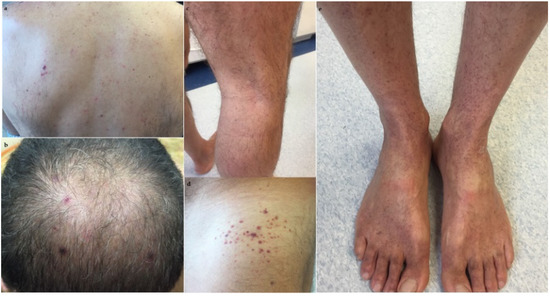 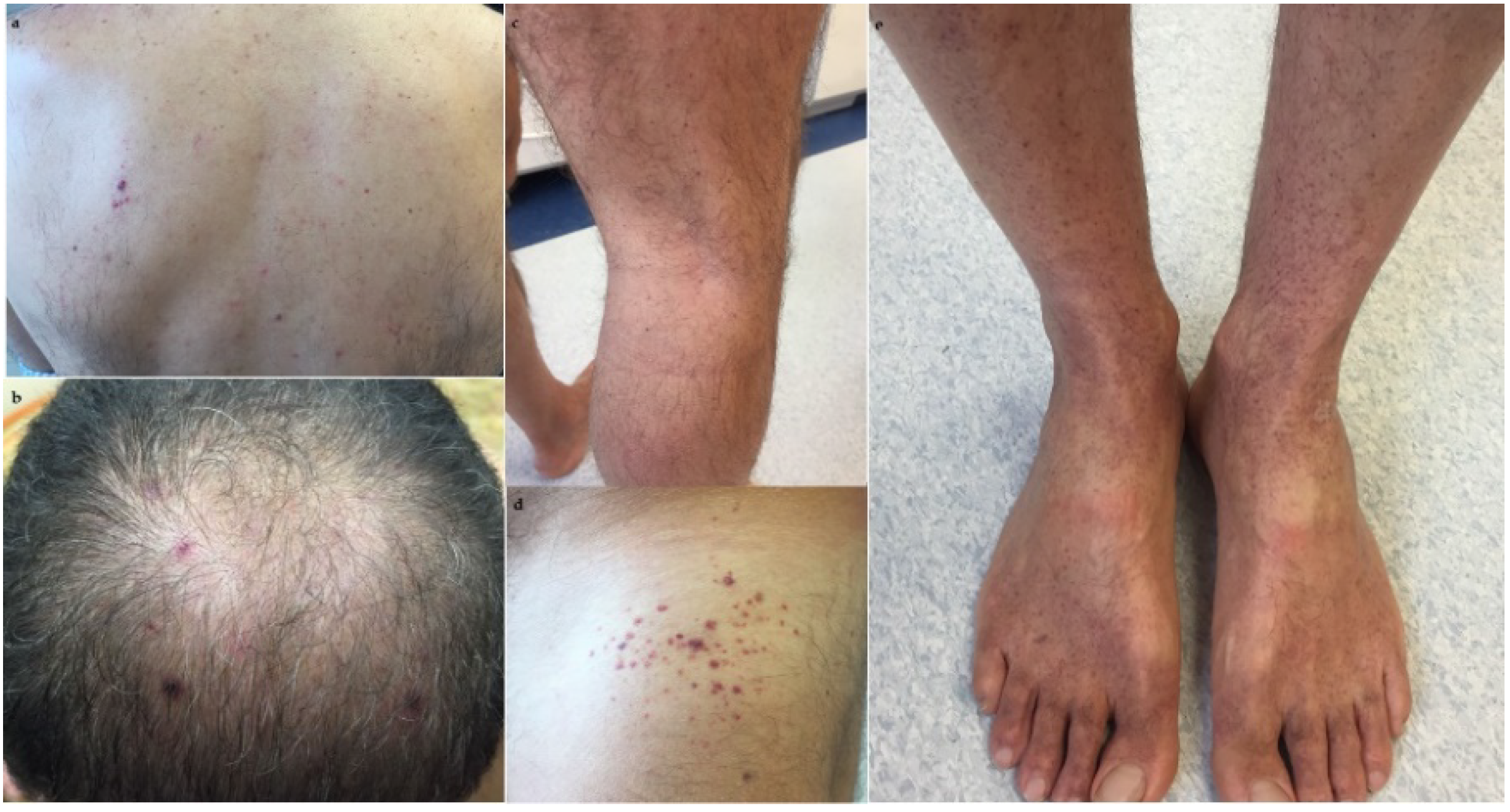 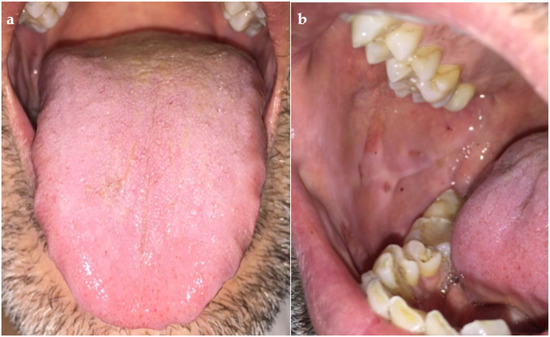 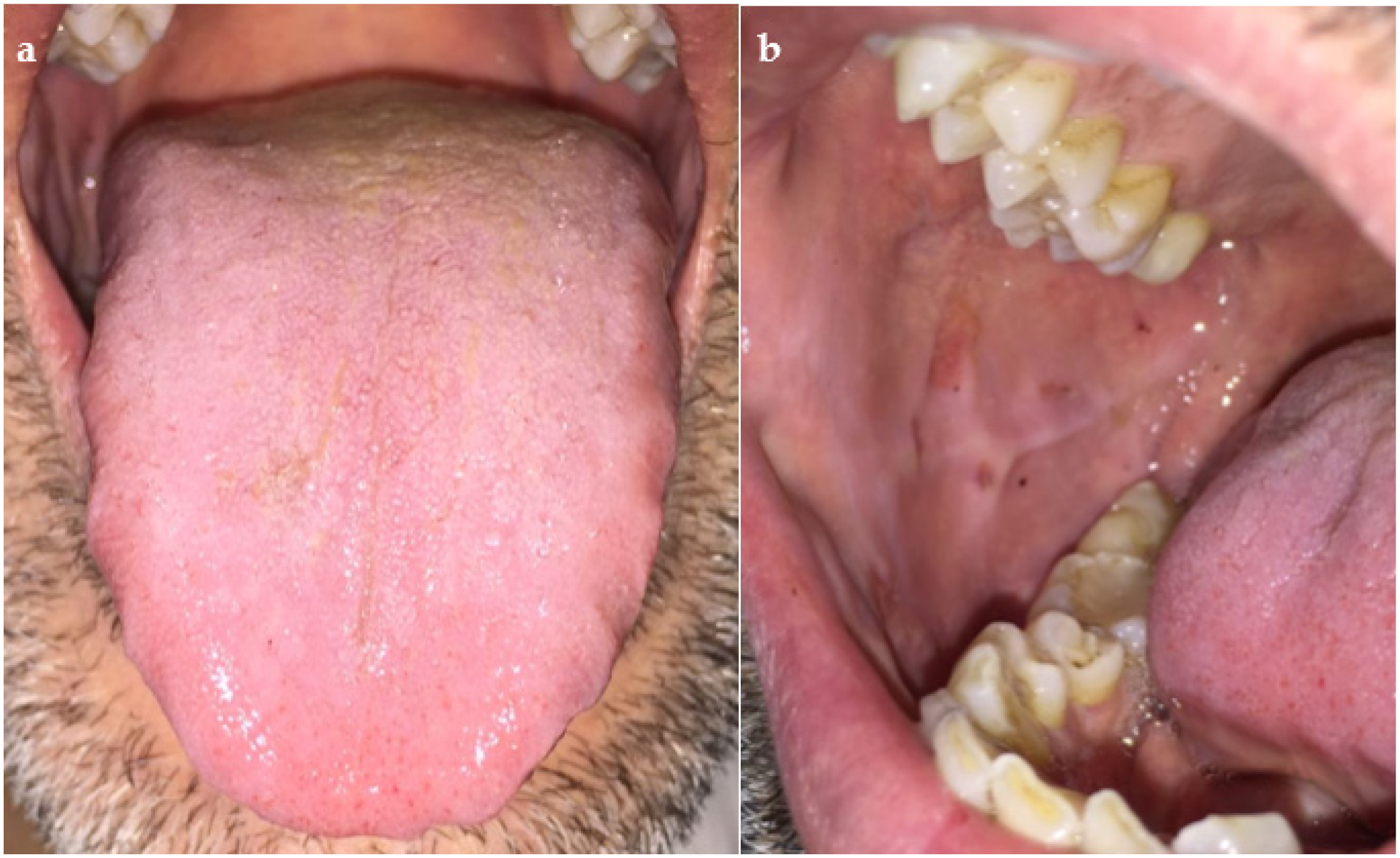