Assessment of Oxygen Expansion during Internal Bleaching with Enamel and Dentin: A Comparative In Vitro Study
Previous Article in Special Issue

This bench study was designed to use a fully digital workflow to virtually plan the placement of dental implants into stereolithographic models of mandibles to investigate the accuracy of the FG 3D implant placement technique compared with free-hand drilling. Ethical approval was obtained from the University of Salford Ethics Committee (HST1920-007).

2.1. Eligibility Criteria for the Selection of Cases

In this study, the CBCT images of six patients at ICE Postgraduate Institute and Hospital were used to create stereolithographic models for implant placement. Inclusion and exclusion criteria were as follows: The inclusion criteria were based on selecting the patients with premolar/molar region of the mandible in their mouth. Adequate bone height between the alveolar ridge and inferior alveolar nerve (IAN) for a 4 mm safety zone for a 10 mm implant. Patients, in which implants can be placed 1.5 mm from adjacent teeth and where the clearance of 1.5 mm between the shoulder of implant and buccal bone. The exclusion criteria were based on patients where it was not able to trace the full course of the IAN canal and/or mental foramina by a practitioner. Additionally, with other incidental findings or pathology on CBCT. The planned procedure was to place a single dental implant retained crown using a (Megagen AnyRidge® (Bedfordshire, UK)) 4.0 × 10 mm implant in the correct restorative position with the adequate bone surrounding the implant for long-term stability. A summary of cases is described below in Table 1. For each case, the corresponding. STL files and CBCT data needed to be uploaded to the R2 gate, therefore, 3D planning for each case was required and the following protocols were followed to achieve it.

MORITA (Veraviewepocs) CBCT unit was used to acquire sectional images with a 5 × 5 cm field of view (FOV) of the mandible of patients undergoing routine dental implant treatment at the hospital. STL files were obtained from intraoral optical scans (IOS) as a digital impression of the surrounding anatomy of the teeth and the soft tissues using Trios/3Shape® unit (Straumann, UK). The STL images were merged with the CBCT data and the IAN was traced using Megagen R2Gate® planning software (www.r2gate.com (accessed on 10 May 2021)). Hounsfield Units (HU) values for bone (dense bone > 1250 HU for D1 to 350–150 HU for trabecular bone) were used to identify the course of the IAN. R2Gate uses Digital-EYE to delineate bone of different densities according to HU values; 256 shaded of grey are converted to a colour map of bone morphology to help plan the optimal drilling sequence (Figure 1). Once the virtual planning was verified, two models for each case were 3D printed from the STL files using Envision TEC printer (Vida, Dental 3D Printers, Dearborn, MI, USA) [10].
The printer can print to an accuracy of 30 microns using e-guide tint resin to ensure consistency in the manufacturing of the models [15]. A suitable implant was selected from the R2Gate® digital library and placed in close proximity to the location of the IAN and MN in a restoratively driven position as dictated by the virtually generated tooth. For all cases, a (Megagen AnyRidge®) implant (4.0 mm diameter by 10 mm length) was virtually planned with the following parameters (Figure 2). A minimum “safety zone” of 4 millimetres to the IAN was allowed according to the current consensus [16]. A length of 1.5 millimetres from the implant of the adjacent teeth was in line with clinical guidelines [17]. A clearance of 1.5 millimetres was planned between the shoulder of the implant and the buccal bone plate according to established clinical guidelines [18]. The distance, between the apex of the implant and the IAN of the virtually planned implant, were measured in a perpendicular slice through the apex of the planned implant using the measuring tool of the software. The distance is the shortest point from the apex of the implant to the IAN. The virtual plan was checked and verified by the researcher as well as the technician.

An experienced implant dentist who has placed over 50 implants has placed the implants on the models. As shown by Renouard, Amalberti and Renouard et al. [19], this level of experience is needed to ensure the accuracy of implant placement. For each of the clinical cases, the implants were being placed in the 3D printed replica models using (Megagen AnyRidge®) freehand surgical kit and using the Megagen® universal fully guided kit on a duplicate 3D printed model produced as outlined above. The implants were placed using sterile water irrigation to avoid overheating of the resin on the model which could affect the accuracy of the implant placement. For the FH placement, the virtually planned position of the implant was available to enable the clinician to place the implant as close to the planned position as possible. The FH implants were placed 2 mm deeper on the drill markings to take into account the depth of the soft tissue present [20]. The Megagen AnyRidge® drill protocols were used to prepare the implant sites according to FH/FG placements. The model was rinsed with water after drilling to allow removal of any debris in the osteotomy site which could affect the implant seating.

These STL files of the scanned implants were imported into Exocad dental laboratory software and digital (Megagen AnyRidge®) 4.0 × 10 mm implants were virtually fitted onto the scan flag to image the digital position of the implant that has been placed in the model. These STL files were then exported out of EXOCAD® and imported into the R2 Gate® virtual planning software for compression with the planned implant positions and data analysis [21,22].

2.6. Measurement of Deviations in Implant Position

Data were recorded and descriptive statistics were produced using Microsoft Excel. The data were considered paired as the measurements for free-hand and fully guided surgery came from the same sample of patients [24]. The neck of the implant was considered a consistent point of entry and was maintained for FG and FH surgical techniques. As such, paired t-tests were completed for the following outcomes comparing free-hand and fully guided: coronal midpoint deviation, apical midpoint deviation, and vector angle deviation; in addition, the freehand and fully guided distance from the IAN was compared to the planned position. Test alpha for significance was set at 0.05 for all of the above tests.

This bench study, within its limitations, demonstrated acceptable surgical accuracy for both FH and FG techniques that would allow safe placement of implants close to vital structures such as the IAN when a safety zone of 3 mm is allowed. Nevertheless, a better margin of error was observed for FG surgery concerning the angular deviation and controlling the distance of the implant to the IAN using R2 Gate® system. It can be concluded from this study that FG surgery offers improved surgical accuracy over FH technique. However, surgeons undertaking FG surgery should be familiar with the inherent inaccuracies of drill guide design, manufacturing, and application errors and must have the experience and ability to manage these limitations and be prepared to revert to conventional freehand implant placement techniques. Future research could focus on the time required for the implant placement its impact and the cost-effectiveness of FG surgery which is essential in the decision making for the approach. Further to this, selecting the large number of sample size collected from multiple centres with techniques used by different clinicians will help in gauging the consistency of results drawn from this pilot study.

University of Salford for ethical approval and 3D Systems software specialists for performing the analysis. 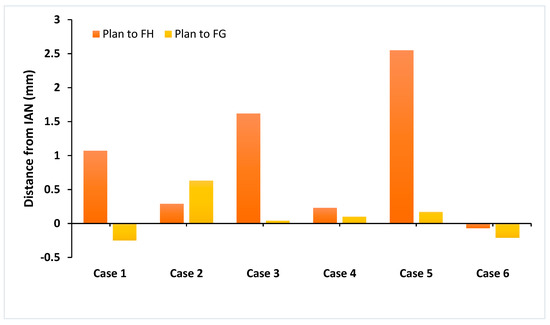 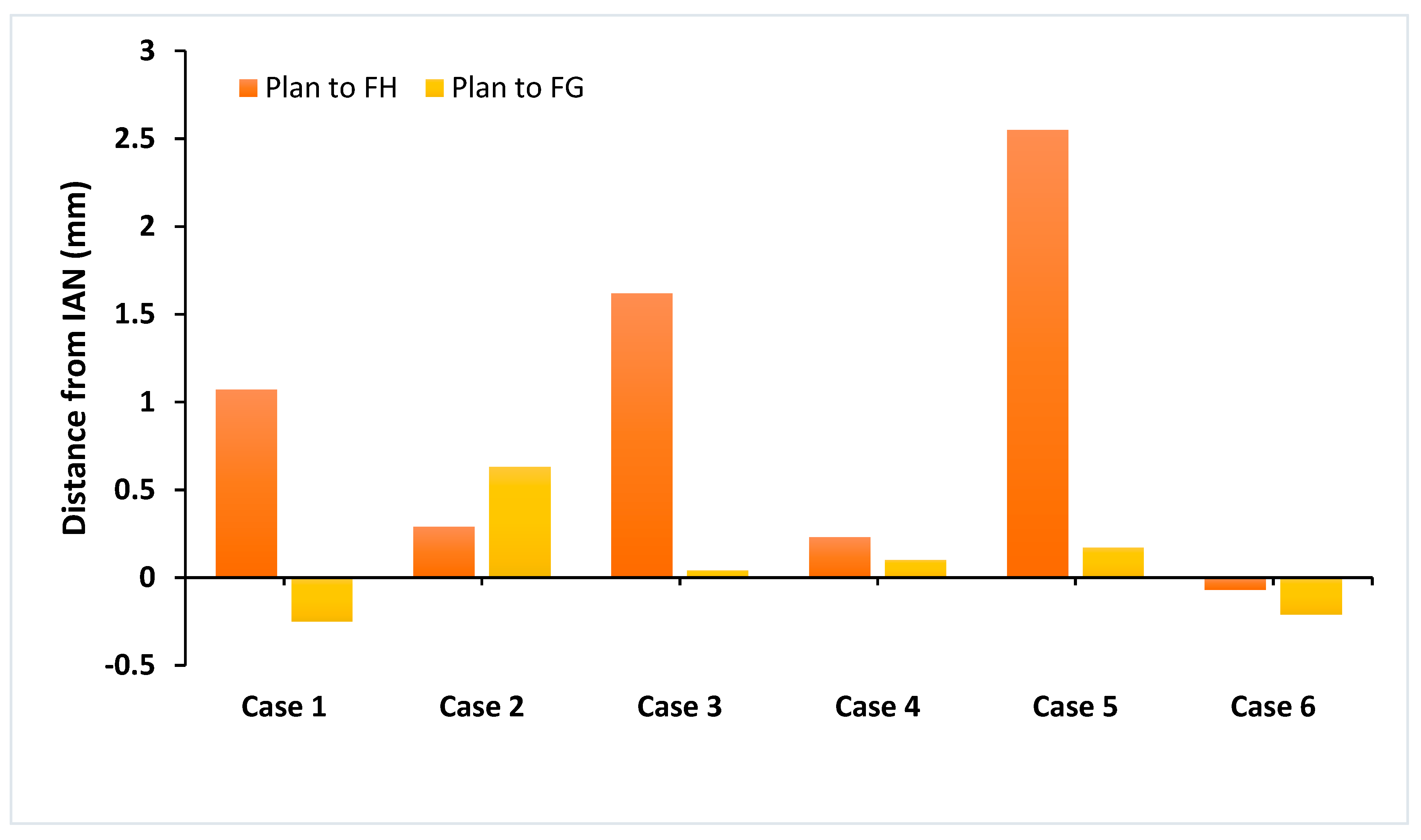