Submit to Medicines Review for Medicines 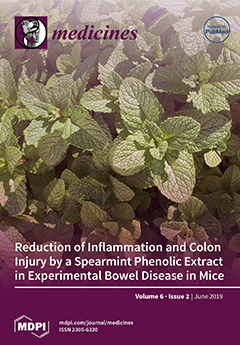 Cover Story (view full-size image): Spearmint (Mentha spicata L.), an aromatic Mediterranean plant, has both antioxidant and anti-inflammatory properties. The report in this issue by Direito et al. suggests that spearmint extract might be useful as an add-on to existing therapies for Inflammatory Bowel Disease (IBD). IBD is a chronic and incapacitating disease classified into two phenotypes (ulcerative colitis and Crohn’s disease) that affects millions of people in western countries, with an increasing number of cases diagnosed every year. This associated between spearmint and IBD opens new research opportunities for exploring how a reduction in chronic inflammation could be associated with delayed progression of colon cancer in these patients. View this paper.
Previous Issue
Volume 6, March
Next Issue
Volume 6, September
We use cookies on our website to ensure you get the best experience. Read more about our cookies here.
Accept
We have just recently launched a new version of our website. Help us to further improve by taking part in this short 5 minute survey here. here.
Never show this again