Background: Over the last ten years, a new class of drugs, known as the direct-acting oral anticoagulants (DOACs), have emerged at the forefront of anticoagulation therapy. Like the older generation anticoagulants, DOACs require specific reversal agents in cases of life-threatening bleeding or the need for high-risk surgery. Methods: Published literature was searched, and information extracted to provide an update on DOACS and their reversal agents. Results: The DOACs include the direct thrombin inhibitor—dabigatran, and the factor Xa inhibitors—rivaroxaban, apixaban, edoxaban, and betrixaban. These DOACs all have a rapid onset of action and each has a predictable therapeutic response requiring no monitoring, unlike the older anticoagulants, such as warfarin. Two reversal agents have been approved within the last five years: idarucizumab for the reversal of dabigatran, and andexanet alfa for the reversal of rivaroxaban and apixaban. Additionally, ciraparantag, a potential “universal” reversal agent, is currently under clinical development. Conclusions: A new generation of anticoagulants, the DOACs, and their reversal agents, are gaining prominence in clinical practice, having demonstrated superior efficacy and safety profiles. They are poised to replace traditional anticoagulants including warfarin. View Full-Text
Keywords: andexanet alfa; anticoagulation; apixaban; betrixaban; dabigatran; direct oral anticoagulants; edoxaban; idarucizumab; rivaroxaban andexanet alfa; anticoagulation; apixaban; betrixaban; dabigatran; direct oral anticoagulants; edoxaban; idarucizumab; rivaroxaban
►▼ Show Figures 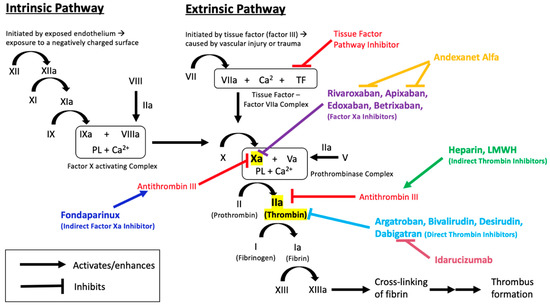