Worldwide Use of RUCAM for Causality Assessment in 81,856 Idiosyncratic DILI and 14,029 HILI Cases Published 1993–Mid 2020: A Comprehensive Analysis

Genus Stachys: A Review of Traditional Uses, Phytochemistry and Bioactivity

Helen Skaltsa
*
Department of Pharmacognosy and Chemistry of Natural Products, Faculty of Pharmacy, School of Health Sciences, National & Kapodistrian University of Athens, Panepistimiopolis, Zografou, 15771 Athens, Greece
*
Author to whom correspondence should be addressed.
Medicines 2020, 7(10), 63; https://0-doi-org.brum.beds.ac.uk/10.3390/medicines7100063
Received: 11 August 2020 / Revised: 18 September 2020 / Accepted: 25 September 2020 / Published: 29 September 2020
(This article belongs to the Special Issue Research Topics in Medicines and How Our Board Members Are Engaged in Them) 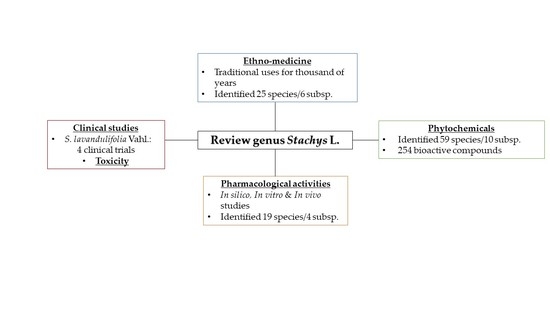