Use of Herbal Medications for Treatment of Osteoarthritis and Rheumatoid Arthritis

Polymyalgia rheumatica (PMR) is estimated to be older adults’ most common inflammatory rheumatic disease. Worldwide, its incidence increases until the age of 90, with a peak around the age of 75 [1,2,3,4,5,6]. The onset of PMR in a centenarian man has been reported [7].
Typical in PMR patients is a sudden-onset bilateral pain in shoulder and pelvic girdles, sometimes associated with neck aching and morning stiffness lasting more than 45 min. Patients usually complain of significant restrictions in self-care activities of daily living (ADL). Additional symptoms such as fever, general discomfort, fatigue, loss of appetite, and loss of weight can be present in some patients [8,9,10,11]. At present, no specific laboratory tests are available. Inflammatory markers such as erythrocyte sedimentation rate (ESR) and C-reactive protein (CRP) concentrations are usually raised at the time of diagnosis, but the diagnosis of PMR is possible even if ESR and CRP are not increased [12,13].
There are several PMR-like diseases, and differential diagnosis is not always easy. Indeed, some patients diagnosed at first with PMR may be reclassified as having a different disease at follow-up [8,9]; and some patients with PMR-mimicking diseases can have a fast (but transitory) response to systemic glucocorticosteroids (GCs).
Shoulder and hip ultrasound (US) examinations can help differential diagnosis, as proposed by the 2012 EULAR/ACR classification criteria [14]. It is worth mentioning that these criteria were designed to discriminate patients with PMR from other mimics of PMR and are not meant for diagnostic purposes. On the other hand, several diagnostic measures have been proposed since Bird’s 1979 criteria, each one with different sensitivity and specificity [15]. Diagnostic or classification criteria should always be applied to avoid defaulting to PMR as a kind of “magic cauldron” in which to put every disease involving long-lasting pain localized to scapular and pelvic girdles and which responds to GCs [11].
Since 2011, when the Food and Drug Administration (FDA) approved the use of Ipilimumab, a fully human monoclonal antibody against cytotoxic-T-lymphocyte antigen-4 (CTLA4), for patients with metastatic melanoma, immune checkpoint inhibitors (ICIs) therapy has been recommended for an increasing variety of cancers, both in the metastatic and adjuvant settings. Our immune system has some regulatory receptors (named “checkpoints”) maintaining the balance between T cell lymphocyte activation and inhibition. CTLA-4, programmed death protein-1 (PD-1), and programmed death ligand-1 (PD-L1) are among the best studied checkpoints. ICIs reduce the suppression of effector T cells, mainly CD8+, with consequent up-regulation of tumor-specific immune responses [16,17,18,19,20].
Unfortunately, this same action mechanism can trigger immune-related adverse events (IRAEs), which can affect multiple organ systems; this risk is higher when two ICIs are used in combination [21,22,23,24,25]. Triggered by the growing use of ICIs, an increasingly wide range of rheumatologic IRAEs have been described. A recent pharmacovigilance study observed that the risk of developing PMR is five times higher in cancer patients treated with ICIs compared with patients on other treatments [26]. Moreover, ICIs therapy can cause the flaring up of prior autoimmune rheumatic diseases, PMR among these [27].
Atypical findings following ICIs therapy are reported in many patients, leading to diagnoses of PMR-like syndromes, as such patients do not meet standard classification or diagnostic criteria for PMR. A question worth exploring is whether PMR-like findings following ICIs therapy represent a subset of disease or a new clinical entity.
Furthermore, onset of PMR or PMR-like syndromes can happen many months after the beginning of ICIs therapy. Are they to be considered as an adverse drug reaction (ADR)? Or is their appearance just a coincidence?
AIM: (1) To evaluate how PMR and PMR-like syndromes are identified and classified following ICIs therapy; (2) To assess whether they can be considered as ADR.

This review included all studies and case-reports published after 2011 (when FDA approved the use of the first ICI) describing the association of PMR or PMR-like syndromes with all types of ICIs therapy.

Reviews, conference abstracts, comments, and secondary articles were excluded. Each review’s reference list was scanned for additional publications meeting this study’s inclusion criteria. When papers reported data partially presented in previous articles, we referred to the most recent published data.
The presence of the giant cell arteritis (GCA) was an additional exclusion criterion, unless all data concerning GCA were clearly distinct from PMR findings. GCA is a large-vessel vasculitis closely linked to PMR: 40–60% of GCA patients show signs of PMR, whereas 10–16% of PMR patients show signs of GCA. It is common knowledge that the association of GCA with PMR has several consequences: i.e., higher dosages of glucocorticoids, more frequent association with cancer, more frequent vascular and ocular complications, and more severe prognosis [29,30].
Finally, non-English language studies with no English abstract were excluded.

All article titles identified were screened by a single reviewer (Isetta, M) against the inclusion and exclusion criteria. Two of the authors of this study (Manzo, C and Natale, M) independently reviewed the titles and abstracts of all identified records. After reviewing the abstracts, data comparisons were conducted to ensure completeness and reliability. Full-text versions of potentially relevant papers identified in the initial screening were sourced. Reasons for exclusion were recorded. Differing decisions were resolved by consensus.
Data on study design, source of information, and participant characteristics were independently extracted by the same reviewers, using a standardized ad hoc form (File S2). The primary outcome of interest was the total number of patients who developed PMR or a PMR-like syndrome following ICIs therapy. Other data were collected: diagnostic or classification criteria used to diagnose PMR; its temporal relationship with ICI; study design; and if and how PMR and PMR-like syndromes were evaluated as an adverse drug reaction (ADR). Meta-data from each study, such as lead author name and publication year, were also listed.

A subjective assessment of the included studies’ methodological quality was performed by all the authors using the Newcastle-Ottawa Scale (NOS), a quality assessment tool for non-randomized studies, endorsed for use in systematic reviews of non-randomized trials by the Cochrane Collaboration [31,32]. NOS uses a “star system” based on three major criteria: study groups’ selection (0–4 stars, or 0–5 stars for cross-sectional studies); comparability of the groups according to key and additional factors (0–2 stars); and determination of the outcome of interest or exposure (0–3 stars). A total score of 3 or less was considered poor; 4–6 was considered moderate; and 7–10 was considered high quality. Studies scoring 3 or less were excluded from our review. The authors settled all disagreements through discussions and by consensus.

An overview of the study identification process is reported in Figure 1. The initial search yielded 2059 papers, of which 1778 articles were excluded based on title and abstract screening. A total of 281 articles underwent a full-length review; 207 full-text articles were assessed for eligibility; 193 articles were excluded (reviews and comments = 58; conference abstracts = 39; papers containing similar or identical data presented by the same group of researchers in several articles = 23; studies having poor quality = 5; no outcome of interest = 68). Finally, data were extracted from seven case-series and eight case-reports, concerning a total of 54 patients.

In Table 1, we listed the main characteristics of the eight case reports included in this review.

In Table 2, we listed the main characteristics of the case-series included in our review.

3.4. Risk of Bias Assessment in Analysis of the Included Studies

As stated, quality assessment of the included studies was performed using the NOS. In line with this scale, three major criteria were evaluated: (1) study groups’ selection; (2) comparability of the groups according to key and additional factors; and (3) determination of the outcome of interest or exposure.
Table 3 lists the scores. Most studies were given a low score in the study group’s selection because no diagnostic or classification criteria were referenced, and in many studies PMR diagnosis was made by a managing non-rheumatologist. Furthermore, no scales or algorithms were used in evaluating PMR or PMR-like syndromes as ADR. The importance of these points is discussed in the specific section.
All the included studies failed to recruit a comparator group, and used general population data as reference. Therefore, comparability scores were low, since lack of comparison groups limits the generalizability of the presented results.

3.5. ICIs in Patients with Preexisting PMR

Our literature search showed that the use of ICIs in patients with preexisting PMR has rarely been described: only four case reports were identified where ICI therapy caused a PMR flare and increase of GC dosages, but this event had no impact on the management of the oncological disease and associated immunotherapy.

Some discussion points and grey areas emerged from our review, namely:
(1) several studies were retrospective and not randomized, and in some cases, the diagnosis of PMR was made in non-rheumatologic settings;
(2) the lack of validated scales for ADR assessment was identified as another key critical point;
(3) whether patients had a real PMR or rather something that was PMR-like is still a matter of discussion. How did one diagnose a PMR-like syndrome if the boundaries of “typical” PMR had not been defined in the vast majority of published reports? In some cases, those that were defined as PMR-like syndromes could be new distinct entities.
According to our review, the relationship between PMR and ICIs therapy is not well defined. We hope that multicenter and prospective future research studies will be designed where, for example, validated scales for ADR assessment and diagnostic and/or classification criteria for PMR are utilized and reported on. 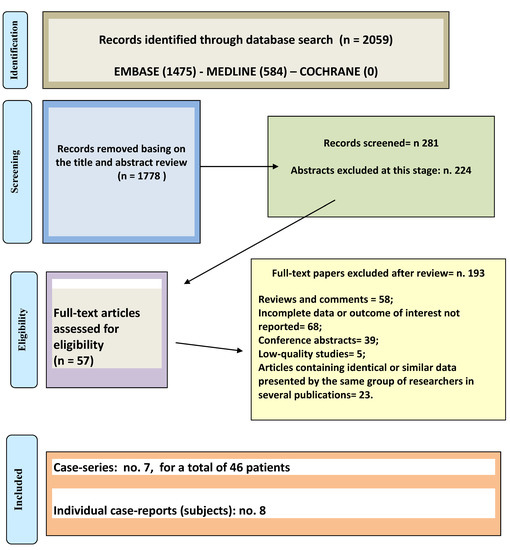 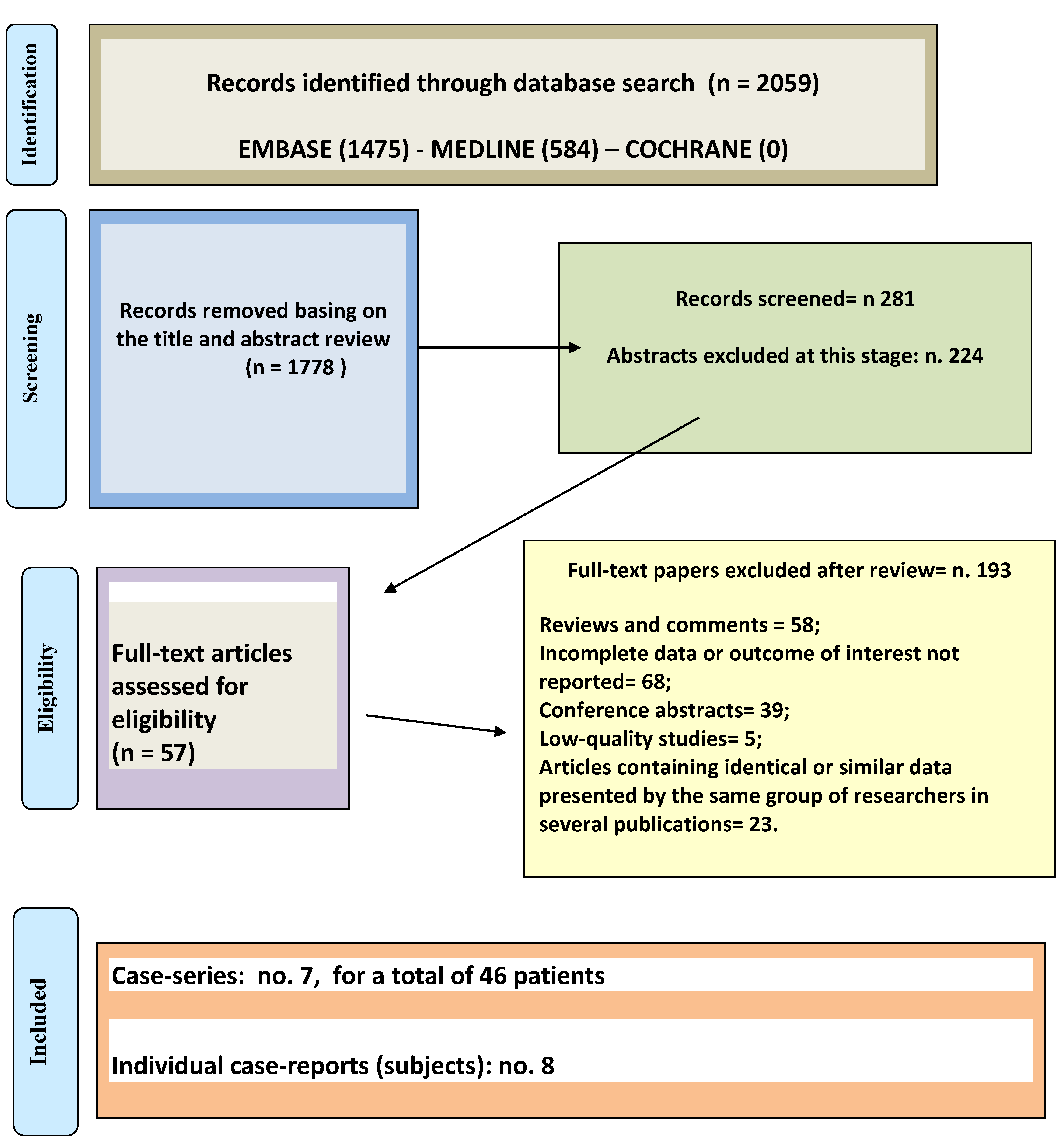 Table 3. Quality assessment of the included studies.
Table 3. Quality assessment of the included studies.
© 2020 by the authors. Licensee MDPI, Basel, Switzerland. This article is an open access article distributed under the terms and conditions of the Creative Commons Attribution (CC BY) license (http://creativecommons.org/licenses/by/4.0/).
We use cookies on our website to ensure you get the best experience. Read more about our cookies here.
Accept
We have just recently launched a new version of our website. Help us to further improve by taking part in this short 5 minute survey here. here.
Never show this again