Stephen B. Erickson
1 and

Calcium is an important cation in the human body that plays a significant role in maintaining cellular biologic function, either in the free ion or protein-bound complexes [1,2]. The majority (>99%) of total body calcium resides in the bones as hydroxyapatite, a form of calcium-phosphate complex [3]. The remaining total body calcium (approximately 10 in adults) exists outside of the skeletal system and participates in a myriad of essential functions, including neurotransmitter release, muscle contraction, and cellular signaling. Approximately 50% of circulating calcium ions are bound to protein, such as albumin or globulin, whereas the rest exists as unbound ionized (free) calcium [4,5,6,7,8]. Measuring ionized calcium is important, as Payne’s formula [6] for corrected total calcium level tends to overestimate ionized calcium, especially in patients with hypoalbuminemia [7,8]. Thus, the gold standard for evaluating calcium status is to measure ionized calcium [9,10].
Disturbances of serum calcium, hypocalcemia and hypercalcemia, are associated with increased mortality [11,12,13,14,15,16,17]. A large retrospective cohort study of the United States Department of Veterans Affairs involving 1.9 million patients suggested a U-shaped association between calcium disturbances and mortality [18]. Furthermore, long-term effects of serum calcium derangements are also possible. Both reduced and elevated admission serum ionized calcium were associated with increased 1 year mortality with a U-shape relationship [19]. While the effects of calcium disturbances at hospital admission on poor outcomes among hospitalized patients have been demonstrated [4,5,19], the incidence of in-hospital calcium disturbances and their association with mortality are currently unknown.
Therefore, the objective of this study was to investigate the incidence of in-hospital hypocalcemia and hypercalcemia, assessed by serum ionized calcium level, and their impact on in-hospital mortality among hospitalized patients.

The Mayo Clinic Institutional Review Board approved this study and waived the need for informed consent as long as patients provided Minnesota research authorization, due to the minimal risk nature of this investigation.
We initially searched our institutional database to identify all patients (aged 18 years or older) who were admitted to Mayo Clinic Hospital, Rochester, Minnesota, from 2009 to 2013. Our inclusion criteria consisted of (1) patients who had normal admission serum ionized calcium levels of 4.60 to 5.40 mg/dL, and (2) patients who had at least two in-hospital serum ionized calcium values. Exclusion criteria consisted of patients who required renal replacement therapy in hospital.

2.2. Definition of In-Hospital Hypocalcemia and Hypercalcemia

We assessed the impact of in-hospital serum ionized calcium derangements on in-hospital mortality. We used the institutional database to determine vital status at hospital discharge.

3.1. Incidence of In-Hospital Hypocalcemia and Hypercalcemia

3.2. Association of In-Hospital Hypocalcemia and Hypercalcemia with Mortality

Our study demonstrated that in-hospital serum ionized calcium derangements affected more than half of hospitalized patients (54%). Hypocalcemia occurred more often than hypercalcemia in the hospital. Moreover, we demonstrated for the first time that serum calcium disturbances in hospitalized patients are both common and associated with higher mortality.
In-hospital hypocalcemia and hypercalcemia were significantly associated with higher in-hospital mortality compared with persistently normal serum ionized calcium levels throughout hospitalization. This finding is in line that in-hospital mortality progressively increased with greater total calcium level changes, either in a decremental or incremental direction [12]. Our studies support the significance of calcium level fluctuations toward mortality. Hypercalcemia in the hospitalized setting is commonly seen in patients with cancers or endocrine/metabolic disorders [3,13,21]. An increase in calcium levels can cause renal vasoconstriction and nephrogenic diabetes insipidus, resulting in volume depletion and leading to a pre-renal AKI or exacerbating its severity [4]. AKI has been clearly linked with worse patient outcomes, including hospital and long-term mortality [22,23,24,25]. In addition, hypercalcemia is associated with acute neuronal injury [26] and acute congestive heart failure [27].
It has been observed that hypocalcemia is highly prevalent in critically ill patients and is associated with the severity of illness [2]. The underlying pathophysiology of this finding is not entirely understood. Some evidence suggests that resistance to the effects of PTH in the kidney and bone is involved [28,29,30]. Proinflammatory cytokines, namely tumor necrosis factor-α, have been linked to the severity of hypocalciuria and low concentrations of vitamin D metabolites in critically ill patients [29]. Moreover, hypomagnesemia, another common electrolyte complication in critically ill patients, could impair PTH secretion and thus has been suggested as a possible contributor to hypocalcemia [31,32]. Our study was adjusted for all possible confounders including comorbidities, and the association between in-hospital hypocalcemia and higher in-hospital mortality remains significant. Although the underlying mechanisms remain unclear, it is suggested that hypocalcemia can result in alteration of the myocardium action potential, leading to decreased cardiac contractility and acute pulmonary edema [17,33,34].
Our study has several limitations. First, this is a retrospective study from a single center and predominantly consisted of Caucasian patients. Hence, the generalizability of our findings may be limited. In addition, our cohort of hospitalized patients is highly selected. Serum ionized calcium is normally monitored in more critically ill patients, as supported by the finding that 69% of our cohort had ICU admission, or patients at high risk of serum calcium derangement. Thus, the incidence of serum calcium derangement reported in this observational study might over-estimate the actual incidence in general hospitalized patients. Second, we did not have data on vitamin D, PTH, serum pH, diet, or medications that might alter serum ionized calcium levels (oral or intravenous calcium or vitamin D supplements, diuretics), as well as the causes and timing of in-hospital dyscalcemia. Therefore, there may be unmeasured or residual confounders to our analysis. Nevertheless, the strengths of our study are worth mentioning. Firstly, we included a large cohort of 13,148 adult patients hospitalized with multiple principal diagnoses, and we adjusted for several potential confounders. Second, we excluded patients who had abnormal admission serum ionized calcium levels. This allowed us to ensure that we were explicitly investigating the incidence of in-hospital serum ionized calcium derangements and their impact on in-hospital mortality.

In conclusion, in-hospital serum ionized calcium derangements affected more than half of the hospitalized patients. In-hospital hypocalcemia and hypercalcemia were both significantly associated with increased in-hospital mortality.

This research received no specific grant from any funding agency in the public, commercial, or not-for-profit sectors. 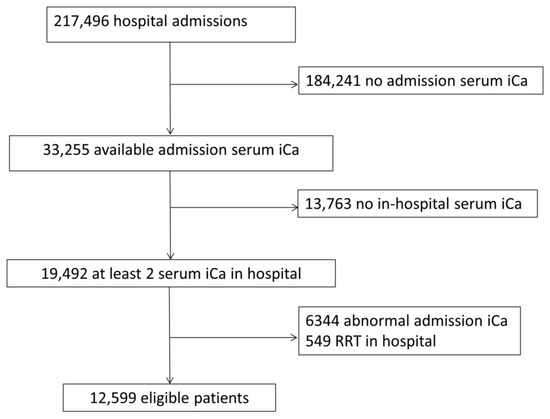 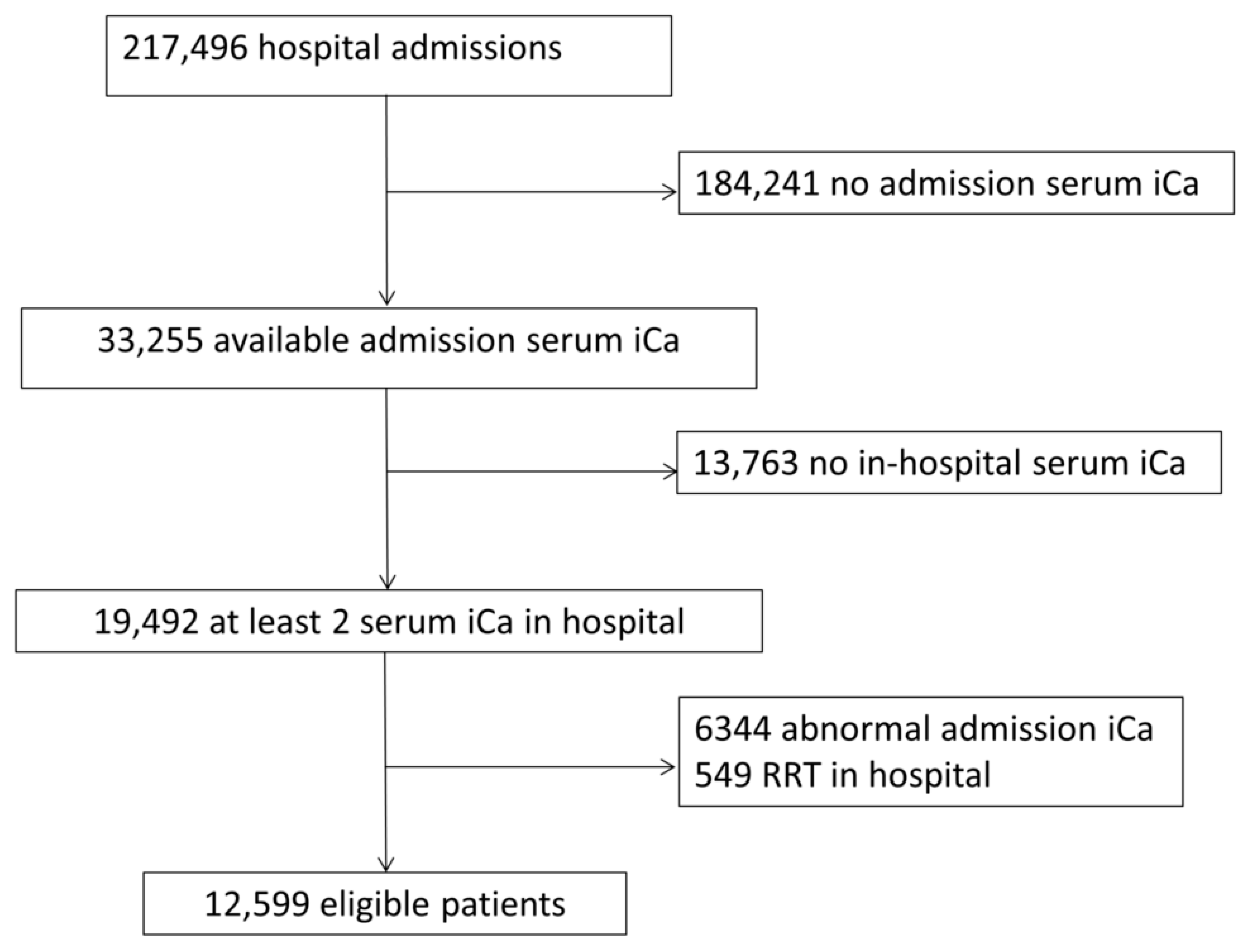