Background: Considering the anti-inflammatory properties of the Japanese traditional Kampo medicine Boiogito (BO), we aimed to investigate the therapeutic effect of BO to prevent the development of knee osteoarthritis (KOA) in rats with surgically induced KOA. Methods: Destabilization of the medial meniscus (DMM) was performed to induce osteoarthritis in the right knees of 12-week-old Wistar rats under general anesthesia. The rats were orally administered 3% BO in standard powder chow for 4 weeks after surgery (controls: n = 6; sham group: n = 6; DMM group: n = 5; DMM + BO group: n = 5). During this period, the rotarod test was performed to monitor locomotive function. After 4 weeks, histological assessment was performed on the right knee. Results: Oral administration of BO improved locomotive function in the rotarod test. Walking time on postoperative days 1, 14, or later was significantly longer in the DMM + BO group than in the DMM group. Histologically, the DMM group showed significant progression of KOA, which, in the DMM + BO group, was strongly suppressed, as assessed by the Osteoarthritis Research Society International score. Conclusions: Our results showed that oral administration of BO had a clinically preventive effect on early stage posttraumatic KOA. View Full-Text
Keywords: boiogito; knee osteoarthritis; rat boiogito; knee osteoarthritis; rat
►▼ Show Figures 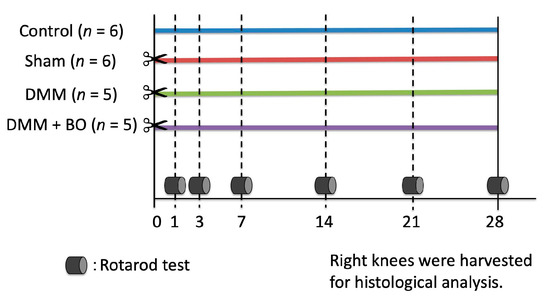