Emerging Research in Chronic Pruritus: From Bedside to Bench and Back Again
Next Article in Special Issue

A Double-Blind Randomized Placebo-Controlled Study Assessing the Safety, Tolerability and Efficacy of a Herbal Medicine Containing Pycnogenol Combined with Papain and Aloe vera in the Prevention and Management of Pre-Diabetes

Uncharted Source of Medicinal Products: The Case of the Hedychium Genus

A current research topic of great interest is the study of the therapeutic properties of plants and of their bioactive secondary metabolites. Plants have been used to treat all types of health problems from allergies to cancer, in addition to their use in the perfumery industry and as food. Hedychium species are among those plants used in folk medicine in several countries and several works have been reported to verify if and how effectively these plants exert the effects reported in folk medicine, studying their essential oils, extracts and pure secondary metabolites. Hedychium coronarium and Hedychium spicatum are the most studied species. Interesting compounds have been identified like coronarin D, which possesses antibacterial, antifungal and antitumor activities, as well as isocoronarin D, linalool and villosin that exhibit better cytotoxicity towards tumor cell lines than the reference compounds used, with villosin not affecting the non-tumor cell line. Linalool and α-pinene are the most active compounds found in Hedychium essential oils, while β-pinene is identified as the most widespread compound, being reported in 12 different Hedychium species. Since only some Hedychium species have been investigated, this review hopes to shed some light on the uncharted territory that is the Hedychium genus. View Full-Text
Keywords: Hedychium; traditional medicine; coronarin D; villosin; anti-acetylcholinesterase; antidiabetic; anti-inflammatory; antimicrobial; antioxidant; antitumor Hedychium; traditional medicine; coronarin D; villosin; anti-acetylcholinesterase; antidiabetic; anti-inflammatory; antimicrobial; antioxidant; antitumor
►▼ Show Figures 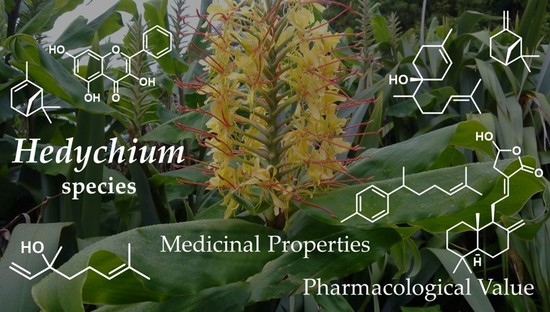