Laparoscopy in Gynecologic and Abdominal Surgery in Regional (Spinal, Peridural) Anesthesia, the Utility of the Technique during COVID-19 Pandemic
Previous Article in Special Issue

Clinical Trials, Potential Mechanisms, and Adverse Effects of Arnica as an Adjunct Medication for Pain Management

Clinical Outcome of Patients Submitted to Liver Resection in the Context of Metastatic Breast Cancer: A Study of a Tertiary Hospital Center

Introduction: Breast cancer is the most incident cancer in the world, accounting for 25% of new cancers per year in females. It is the most frequent malignancy in women, being the fifth cause of death from cancer worldwide. Approximately 5 to 10% of patients already present with metastases at diagnosis, and the liver is the site of metastases in half of these cases. Liver metastasis (LM) resection, performed after neoadjuvant systemic treatment, has been reported to increase median overall survival in this population. Aim: The aim of this analysis is to assess the outcomes of patients undergoing breast cancer liver metastasis surgical resection, including impact on survival, compared to patients where metastasectomy was not performed. Methods: retrospective review of 55 female patients with breast cancer liver metastases, diagnosed and treated in a single tertiary university hospital from January 2011 to December 2016 was performed. Results: In 32/55 patients (58.2%), multi-organ metastases were identified (the most common sites being bone, lungs, and lymph nodes). Of the remaining 23 patients, the liver was the unique metastatic site; thirteen patients had diffuse bilobar hepatic metastases. The remaining ten patients were proposed for surgical treatment; three of them had peritoneal carcinomatosis identified during surgery, and no hepatic metastasectomy was performed. As a result, only seven (12.7%) patients underwent liver metastasectomy. Overall survival was higher in patients who had LM surgery (65 months [Interquartile Range (IQR) 54–120]), in comparison to those diagnosed with diffuse bilobar hepatic metastases (17.5 months [IQR 11–41]), and with those showing concurrent liver and bone metastases (16.5 months [IQR 6–36]) (p = 0.012). In univariable analysis, the latter two groups showed worse overall survival outcomes (Hazard Ratio (HR) = 3.447, 95%CI: 1.218–9.756, p = 0.02 and HR = 3.855, 95% Confidence Interval (CI): 1.475–10.077, p = 0.006, respectively) when compared to patients with LM. Conclusion: In our series, patients submitted to metastasectomy had a median overall survival after diagnosis of LM three times greater than the non-operated patients with isolated LM, or concurrent LM and bone metastases (65 vs. 17.5 and 16.5 months, respectively). As is vastly known for colorectal cancer liver metastasis, resection of breast cancer liver metastasis may reduce tumor burden, and therefore may improve patient outcome. View Full-Text
Keywords: breast cancer; liver metastasis; prognosis; survival breast cancer; liver metastasis; prognosis; survival
►▼ Show Figures 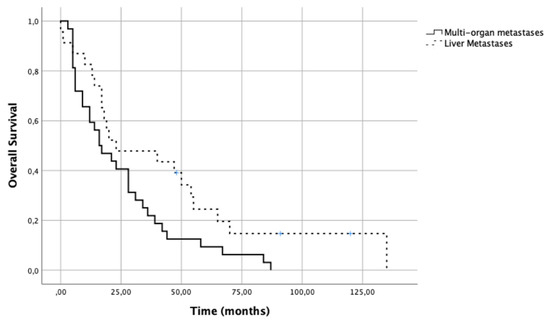