Introduction: It is currently considered that screening for frailty in elderly subjects is a major public health issue. Methods: a cross-sectional pilot study involving elderly subjects (over 75 years of age) admitted at the emergency department of the hospital of Troyes, France in the period from 24 August to 30 August 2017 was conducted. The patients were screened for frailty using the modified SEGA (Short Emergency Geriatric Assessment) (part A) grid (mSEGA), correlated with the subjective opinion of the triage nurse and the senior physician. Results: 100 patients were included during the pilot study period, the mean age was 84.34 years (range: 75–97), 56 patients (56%) were female, and the average CHARLSON score was 4.28 (range: 0–11). The patients’ previous medical histories were remarkable for cardiovascular diseases. The main reason for hospital admission was fall (26 subjects, 26%). Hospitalization was required for 52 subjects (52%). The average mSEGA score was 6.3 +/− 3.59. The completion time for the SEGAm (part A) score was about 5 minutes. According to Cohen’s kappa, the concordance between the subjective opinion of the triage nurse and the mSEGA grid was average, while the concordance between the subjective opinions of the senior physicians was good. Conclusion: The mSEGA score appears to be well-suited and useful in the emergency department. It is easy to use, allows an overall evaluation of the patient, and is not time-consuming. View Full-Text
Keywords: frailty; mSEGA grid; elderly subjects; emergency department; concordance study frailty; mSEGA grid; elderly subjects; emergency department; concordance study
►▼ Show Figures 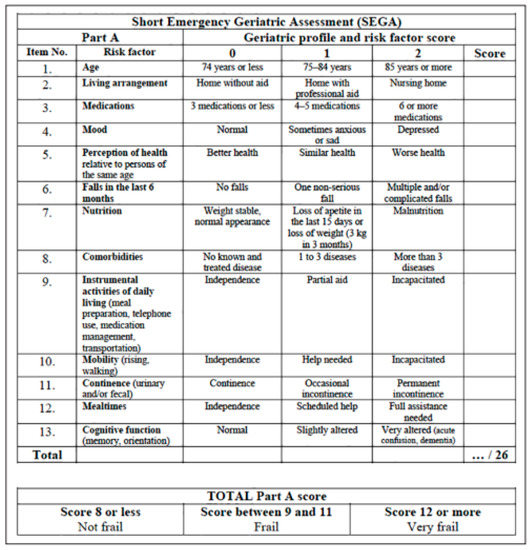