Purification and Biological Function of Caldecrin
Next Article in Special Issue

Comparison of G8 and ISAR Screening Results in Geriatric Urology

Background: The G8 and ISAR scores are two different screening tools for geriatric risk factors and frailty. The aim of this study was to compare the G8 and ISAR screening results in a cohort of urogeriatric patients to help clinicians to better understand and choose between the two tests. Methods: We retrospectively evaluated 100 patients at the age of 75 and above who were treated for different urological conditions. All routinely and prospectively underwent G8 and ISAR screening tests. A G8 score ≤ 14 and an ISAR score > 2 were considered positive. The results for the two tests were compared and correlated to clinical data. Results: The mean age of the patients was 83 y (min. 75–max. 101); 78 of the patients were male, while 22 were female; 58 of the patients were G8-positive, while 42 were G8-negative; and 24 were ISAR-positive, while 76 ISAR were negative. All the ISAR-positive patients were also G8-positive. There was a significant negative correlation between the G8 and ISAR scores (r = −0.77, p < 0.001). Both tests correlated significantly with the Charlson comorbidity index, length of stay, number of coded diagnosis, and Braden score (p < 0.05). Conclusion: Both tests are significantly correlated with each other and to clinical data related to geriatric frailty. However, the G8 score has a much higher rate of positive tests, which limits its use in daily routine, and the ISAR score is therefore preferable. For “fit” geriatric patients, however, a negative G8 score can be of great use as a confirmatory test for further decision making. View Full-Text
Keywords: geriatric screening; geriatric assessment G8 score; ISAR score; geriatric urology geriatric screening; geriatric assessment G8 score; ISAR score; geriatric urology
►▼ Show Figures 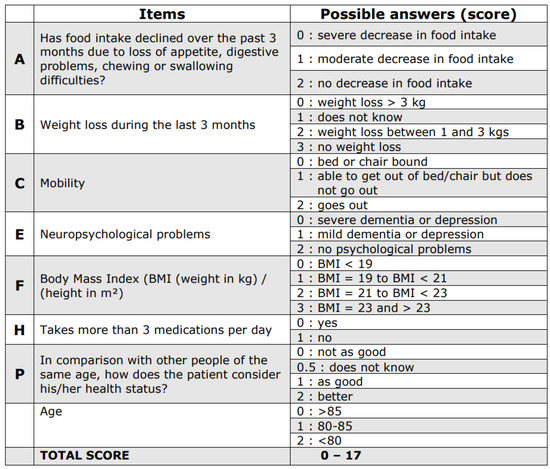