Extraction of Mangiferin and Chemical Characterization and Sensorial Analysis of Teas from Mangifera indica L. Leaves of the Ubá Variety
Next Article in Special Issue

Saccharomyces species in the Production of Beer
Previous Article in Journal

Tune That Beer! Listening for the Pitch of Beer

Saccharomyces cerevisiae in the Production of Fermented Beverages

Alcoholic beverages are produced following the fermentation of sugars by yeasts, mainly (but not exclusively) strains of the species, Saccharomyces cerevisiae. The sugary starting materials may emanate from cereal starches (which require enzymatic pre-hydrolysis) in the case of beers and whiskies, sucrose-rich plants (molasses or sugar juice from sugarcane) in the case of rums, or from fruits (which do not require pre-hydrolysis) in the case of wines and brandies. In the presence of sugars, together with other essential nutrients such as amino acids, minerals and vitamins, S. cerevisiae will conduct fermentative metabolism to ethanol and carbon dioxide (as the primary fermentation metabolites) as the cells strive to make energy and regenerate the coenzyme NAD+ under anaerobic conditions. Yeasts will also produce numerous secondary metabolites which act as important beverage flavour congeners, including higher alcohols, esters, carbonyls and sulphur compounds. These are very important in dictating the final flavour and aroma characteristics of beverages such as beer and wine, but also in distilled beverages such as whisky, rum and brandy. Therefore, yeasts are of vital importance in providing the alcohol content and the sensory profiles of such beverages. This Introductory Chapter reviews, in general, the growth, physiology and metabolism of S. cerevisiae in alcoholic beverage fermentations. View Full-Text
Keywords: Saccharomyces cerevisiae; fermented beverages Saccharomyces cerevisiae; fermented beverages
►▼ Show Figures 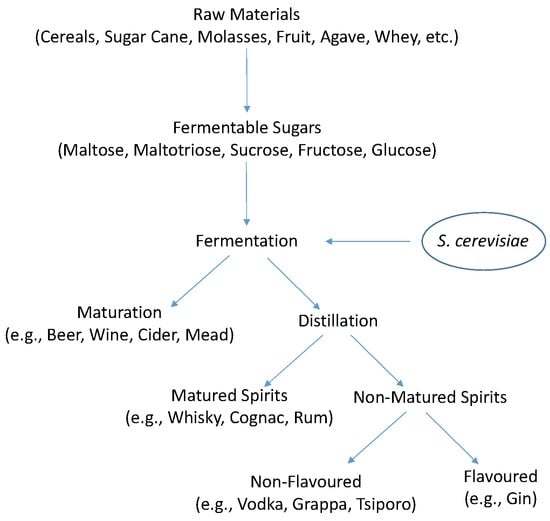