Use of Oak Fragments during the Aging of Red Wines. Effect on the Phenolic, Aromatic, and Sensory Composition of Wines as a Function of the Contact Time with the Wood

São Francisco Valley (SFV) is located in Northeastern Brazil, in a tropical semi-arid region where one vine can produce two harvests per year, due to high temperatures, solar radiation rates, and irrigation throughout the year. This is the main characteristic differing this from other winegrowing region in the world. The objective of this study was to characterize volatile profiles of sparkling wines produced by the traditional method, using Chenin Blanc and Syrah grapes, the two main varieties used for white and red wines, respectively, grown in the region. The sparkling wines remained on lees for six months maturing. The sparkling wines were characterized by the parameters density, pH, total titratable and volatile acidities, residual sugars, dry extract, alcohol content, total phenolic compounds, in vitro antioxidant activity and volatile fraction. The volatile fraction extraction was performed by the HS-SPME technique and tentative identification of the volatile compounds was carried out with GC-MS using the scan mode. A total of 33 volatile compounds were identified, among them 11 alcohols, 13 esters, five carboxylic acids, and four different chemical classes. The volatile profile of Chenin Blanc sparkling wine was associated mainly to 2,3-butanediol, 3-ethoxypropan-1-ol, diethyl succinate, and ethyl decanoate, while Syrah sparkling wine was characterized by benzaldehyde, butyric acid, and some acetates. This study reported for the first time volatile profiles of traditional sparkling wines from SFV, as new products, contributing to better understand the quality potential of these beverages for a tropical semi-arid region. View Full-Text
Keywords: São Francisco Valley; Syrah and Chenin Blanc grape varieties; GC-MS; sparkling wine; volatile compounds São Francisco Valley; Syrah and Chenin Blanc grape varieties; GC-MS; sparkling wine; volatile compounds
►▼ Show Figures 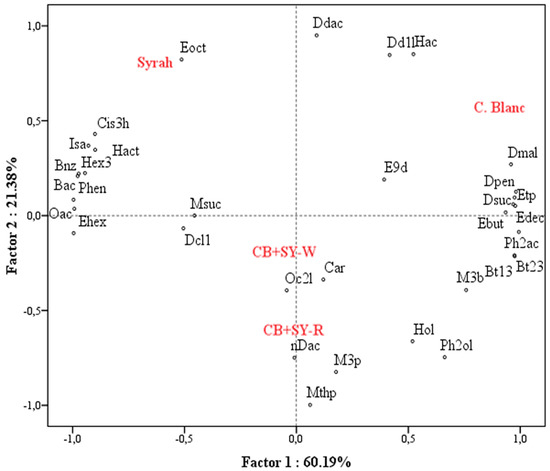