This research quantified 46 volatile compounds in vintage wines (1998–2005) from British Columbia (BC), which had been bottle-aged for up to 120 months. Wines were analyzed up to five times, between December 2003 and October 2008. Compounds were identified using gas chromatography mass spectrometry (GC-MS) and their concentrations were related to “wine age” using single linear regression (SLR). SLR models were developed for each wine compound (eight alcohol, 12 ester/acetate, one acid, one aldehyde, one sulfur) in eight varietal wines: six red (Cabernet franc, Cabernet Sauvignon, Meritage, Merlot, Pinot noir, Syrah) and two white (Chardonnay, Pinot gris). Parameter estimates (b0, intercept; b1, slope) and R2 values for models were reported for each compound and each variety. Most of the significant SLR models (109/123) had negative slopes (−b1 coefficients), indicating a decrease in the compounds’ concentration with “wine age”. The b1 coefficients were very small for isobutyl acetate, ethyl isovalerate and ethyl decanoate (−0.00013 to −0.0006 mg/L/mon) and largest (most negative) for 3-methyl-1-butanol, ethyl lactate and isobutyl alcohol (−2.26 to −6.26 mg/L/mon). A few SLR models (14/123) had positive slopes (+b1 coefficients), indicating an increase in the compounds’ concentration with “wine age”, particularly for acetaldehyde, diethyl succinate, ethyl formate and dimethyl sulfide. The +b1 coefficients were smallest for ethyl decanoate (0.0001 mg/L/mon) and dimethyl sulfide (0.00024 mg/L/mon) and largest for dimethyl succinate and acetaldehyde (0.06 mg/L/mon). These values varied by four orders of magnitude (104), reflecting the large concentration range observed for the different volatile compounds. The work provided, for the first time, an empirical (non-theoretical) approach to documenting the evolution of volatile compounds in BC wines. It equipped the industry with an easy-to-use new tool for predicting the concentration of desirable or undesirable compounds in their wines and assisted the industry with decision making regarding the release of their wines into the marketplace. View Full-Text
Keywords: wine aging; varietal wines; volatile compounds; regression analysis wine aging; varietal wines; volatile compounds; regression analysis
►▼ Show Figures 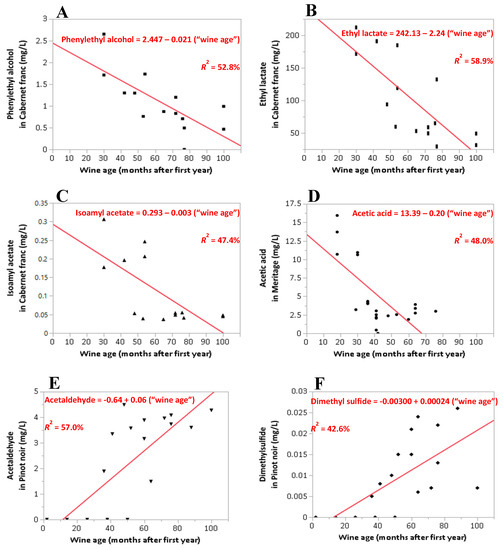