The use of wild yeasts in fermentation is becoming a viable option for the differentiation of beers. To achieve good fermentation rates and alcohol yields, however, such yeasts must have the ability to utilize the wort sugars maltose and maltotriose, a relatively rare trait amongst non-domesticated yeasts. Zygotorulaspora florentina is a species with the ability to utilize both sugars, and was evaluated here with respect to its brewing potential. The strain studied (VTT C-201041) was isolated from bark of an oak tree (Quercus robur) in Espoo, Finland. The fermentation performance of the strain was compared to that of two ale yeasts as well as the species type strain (VTT C-94199). Both Z. florentina strains fermented wort efficiently (apparent attenuation levels >77%). While the type strain had the highest yield, the Finnish strain produced more volatile aroma compounds. The species is capable of decarboxylating ferulic acid to produce the spice/clove-like compound 4-vinylguaiacol, which was present in beers at a concentration above the typical flavor threshold. The characteristic flavor of 4-vinylguaiacol was not however perceptible in taste trials, possibly due to the masking effect of other compounds. The potential of this species for industrial application is discussed, particularly in relation to its apparent ethanol sensitivity. View Full-Text
Keywords: Zygotorulaspora florentina; wild yeast; non-conventional yeast; fermentation; maltotriose; beer; oak (Quercus robur) Zygotorulaspora florentina; wild yeast; non-conventional yeast; fermentation; maltotriose; beer; oak (Quercus robur)
►▼ Show Figures 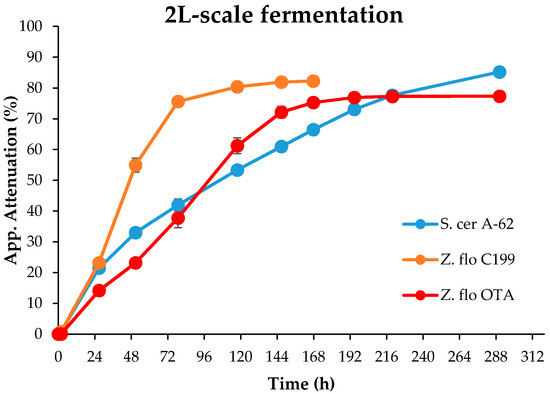