Brewery Packaging in a Post-COVID Economy within the United States

Agro-industrial wastes can be valorized as biorefinery raw materials through innovative, environmentally friendly bioprocessing for added value products. In this study, a process for citrus waste valorization within the biorefinery concept is proposed, including the development of an effective biocatalyst, based on immobilized cells, for aromatic beer production, and an alternative yeast extract (AYE) production in the same unit. Specifically, orange pulp from discarded oranges was applied as an immobilization carrier of the alcohol-resistant and cryotolerant yeast strain S. cerevisiae AXAZ-1. The yeast culture was produced by minor nutrient supplementation using diluted molasses as substrate. An effective Citrus Waste Brewing Biocatalyst (CWBB) was produced and applied for beer fermentation. The aroma-related compounds in beer produced with free yeast cells or the CWBB were evaluated by solid-phase micro-extraction (SPME) gas chromatography–mass spectrometry (GC–MS). The analysis showed that the beers produced by the CWBB had a more complex volatile profile compared with beer fermented by the free cells. More specifically, the CWBB enhanced the formation of esters and terpenes by 5- and 27-fold, respectively. In the frame of the proposed multiprocessing biorefinery concept, the spent CWBB, after it has completed its cycle of brewing batches, was used as substrate for AYE production through autolysis. The produced AYE significantly affected the yeast growth when compared to commercial yeast extract (CYE). More specifically, it promoted the biomass productivity and biomass yield factor by 60–150% and 110–170%, respectively. Thus, AYE could be successfully used for industrial cell growth as an efficient and cheaper substitute of CYE. Within a circular economy framework, the present study highlights the potential use of citrus waste to produce aromatic beer combined with AYE production as an alternative way to valorize these wastes. View Full-Text
Keywords: biorefinery; citrus wastes; valorization; immobilized biocatalyst; S. cerevisiae; aromatic beer; yeast extract. biorefinery; citrus wastes; valorization; immobilized biocatalyst; S. cerevisiae; aromatic beer; yeast extract.
►▼ Show Figures 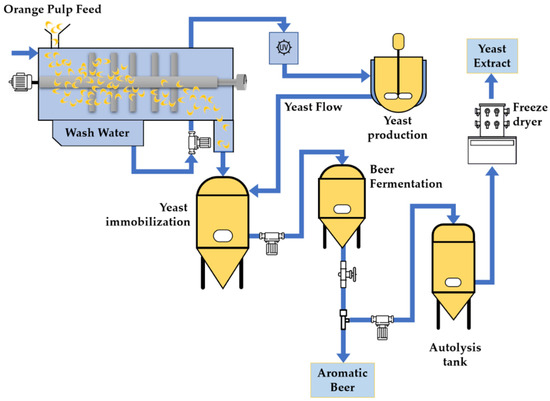