A key enabler of intelligent maintenance systems is the ability to predict the remaining useful lifetime (RUL) of its components, i.e., prognostics. The development of data-driven prognostics models requires datasets with run-to-failure trajectories. However, large representative run-to-failure datasets are often unavailable in real applications because failures are rare in many safety-critical systems. To foster the development of prognostics methods, we develop a new realistic dataset of run-to-failure trajectories for a fleet of aircraft engines under real flight conditions. The dataset was generated with the Commercial Modular Aero-Propulsion System Simulation (CMAPSS) model developed at NASA. The damage propagation modelling used in this dataset builds on the modelling strategy from previous work and incorporates two new levels of fidelity. First, it considers real flight conditions as recorded on board of a commercial jet. Second, it extends the degradation modelling by relating the degradation process to its operation history. This dataset also provides the health, respectively, fault class. Therefore, besides its applicability to prognostics problems, the dataset can be used for fault diagnostics. View Full-Text
Keywords: CMAPSS; run-to-failure; prognostics CMAPSS; run-to-failure; prognostics
►▼ Show Figures 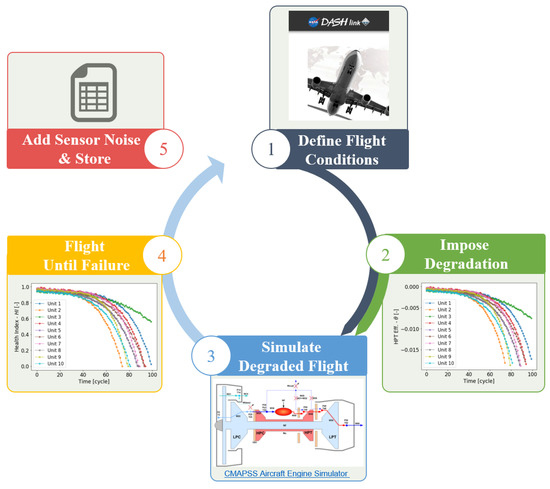