While electricity plays an essential role in the modern world, 13% of the world’s population, equal to 940 million people, are deprived of electricity [1]. This fact can lead us toward the importance of renewable energy resources, especially solar energy, which can be harnessed everywhere globally.
Photovoltaic systems deployed in buildings are divided into two main types [2,3,4,5,6,7,8]:
BAPV or Building Attached PV;
BAPV are added to the building without directly affecting the structure’s function. Roof-mounted PV systems in buildings are generally placed in this category.
BIPV or Building Integrated PV;
BIPV are photovoltaic modules which can be integrated into the building skin, such as the façade or roof, to generate electricity out of solar irradiation [9,10]. They are increasingly being incorporated into new buildings as a principal or ancillary source of electrical power [11,12]. However, existing buildings may be retrofitted with similar technology. The climate also plays a key role in the performance of such a system [13] and it can also be used in other industries, such as the ship manufacturing industry [14].
Researchers have recently sought to determine the feasibility of southern, eastern and western façades for BIPV and BAPV applications [15,16,17], while they have not treated northern façades in much detail. It seems there has been an assumption that the north façades (in the northern hemisphere) are unfeasible economically because the radiation there is low [11,18].
Therefore, the authors designed an experimental study to investigate the northern façade’s potential and compare it with the southern façade. The aim was to collect solar incident radiation and PV electricity production data on the north façade and evaluate the south façade materials’ effect as a reflector to the opposite north-facing façade of the neighbouring building.

2. Value of the Data and Data Specification

The value of the presented data in this paper can briefly be described as follows:
The specifications of the data are also presented in Table 1.

Figure 1 shows a picture of the site with all components and the location of the site. A 3D model of the site is also available as a supplement to this paper. The 3D model is a useful tool to investigate the boundary conditions (reflectance of ground surface/walls etc., the geometry of the complete building and the shading by neighbouring buildings) and the measurement results can therefore be used for the validation of simulations or for comparison with other measurements.

Table 2 indicates the components of the system and the implemented items. The datasheet and catalogue of the equipment as well as the 3D model of the site are available as Supplementary Materials, uploaded to Zenodo and is accessible by the following link: https://0-doi-org.brum.beds.ac.uk/10.5281/zenodo.4804993, accessed on 26 May 2021.

The timeline of the system configuration is as follows.
In December 2019, the PV system and microinverters and electricity monitoring equipment were implemented in front of a glass façade, as shown in Figure 2. Therefore, the electricity production data are available from the first day of January 2020, as presented in the dataset.
On 1 May 2020, a 3 × 3 square meter white panel cladding implemented in front of the PV panel to monitor the effect of the reflected radiation of the white façade on the solar incident radiation and, consequently, the electricity production of the north-facing PV panel (Figure 3).
On 26 June 2020, two sets of solar incident radiation measuring equipment and logging equipment were implemented to calculate the PV system operational efficiency. Figure 4 shows two sets of pyranometers after installation at the site.

The electricity production of the system is available in the dataset as raw data. EN2020 and ES2020 tabs represent the PV panel’s electricity production in the north and south direction, respectively. Figure 5 illustrates each PV panel’s electricity production during a sunny day of each month from February 2020 to November 2020. The presented data in this figure can also be found in the dataset. The associated data of each day is available in the tab entitled to the investigated date. The selected days of each month are chosen to illustrate the system’s performance and irradiation on the system in different months of the year. When it comes to the ground reflection, it is worth mentioning that there was not any snowfall during the monitoring period. Therefore, the ground reflection was always from a grey cement floor.
The geometry of the location, building and walls around the site resulted in cuts in irradiation and electricity production figures. That is why a 3D model is presented to comprehend the system performance and investigate the boundary conditions better.
As can be seen from the dataset, the total electricity production of the south-facing panel and the north-facing panel is equal to 51.78 and 10.51 kWh, respectively.

The work reported in this paper was supported by the Department of Safety, Economics, and Planning of the University of Stavanger (Project name: Building Integrated photovoltaic (BIPV) in dense urban areas, Project number: IN-12011).

Special thanks goes to the Smart City Group and Future Energy Hub at the University of Stavanger for their support. The auhors would like to offer their gratitude to Steni AS and its Product Director, Ola Harildstad Olsen, for supporting and financing part of the equipment. The authors would also like to thank ‪Trond-Ola Hågbo from the University of Stavanger for providing the 3D model of the site.

The authors declare that they have no known competing financial interests or personal relationships which have or could be perceived to have influenced the work reported in this article. The funders had no role in the design of the study; in the collection, analyses or interpretation of data; in the writing of the manuscript, or in the decision to publish the results. 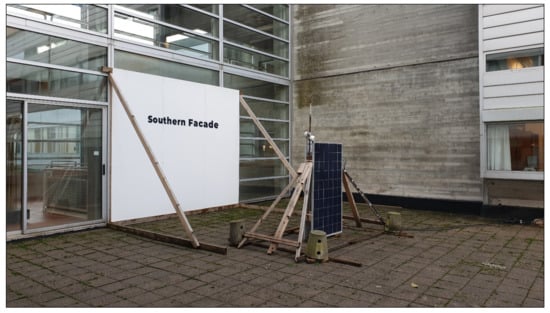 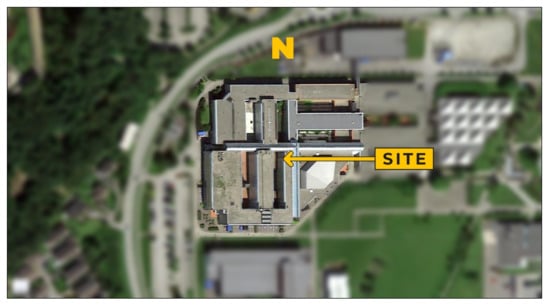 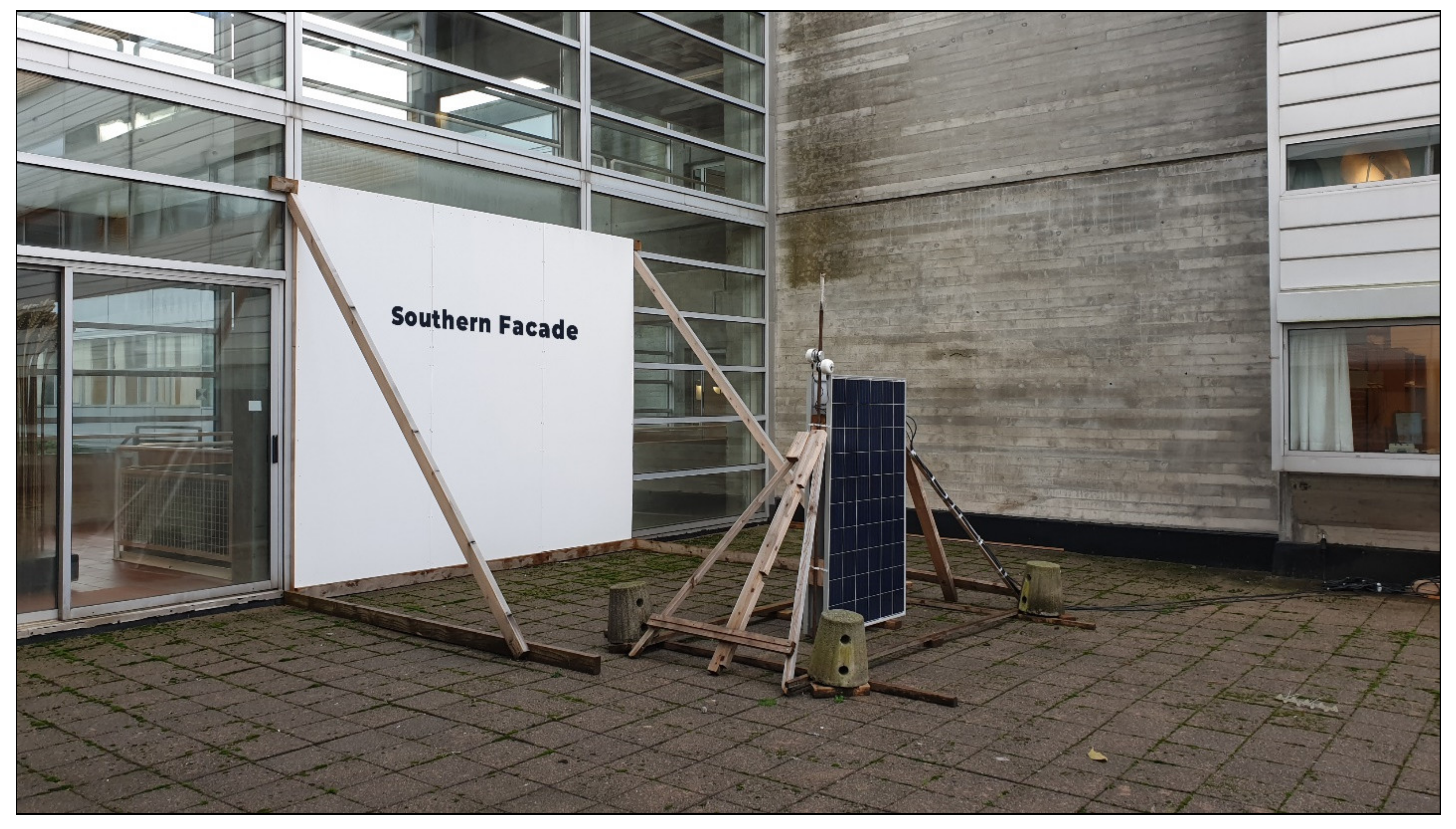 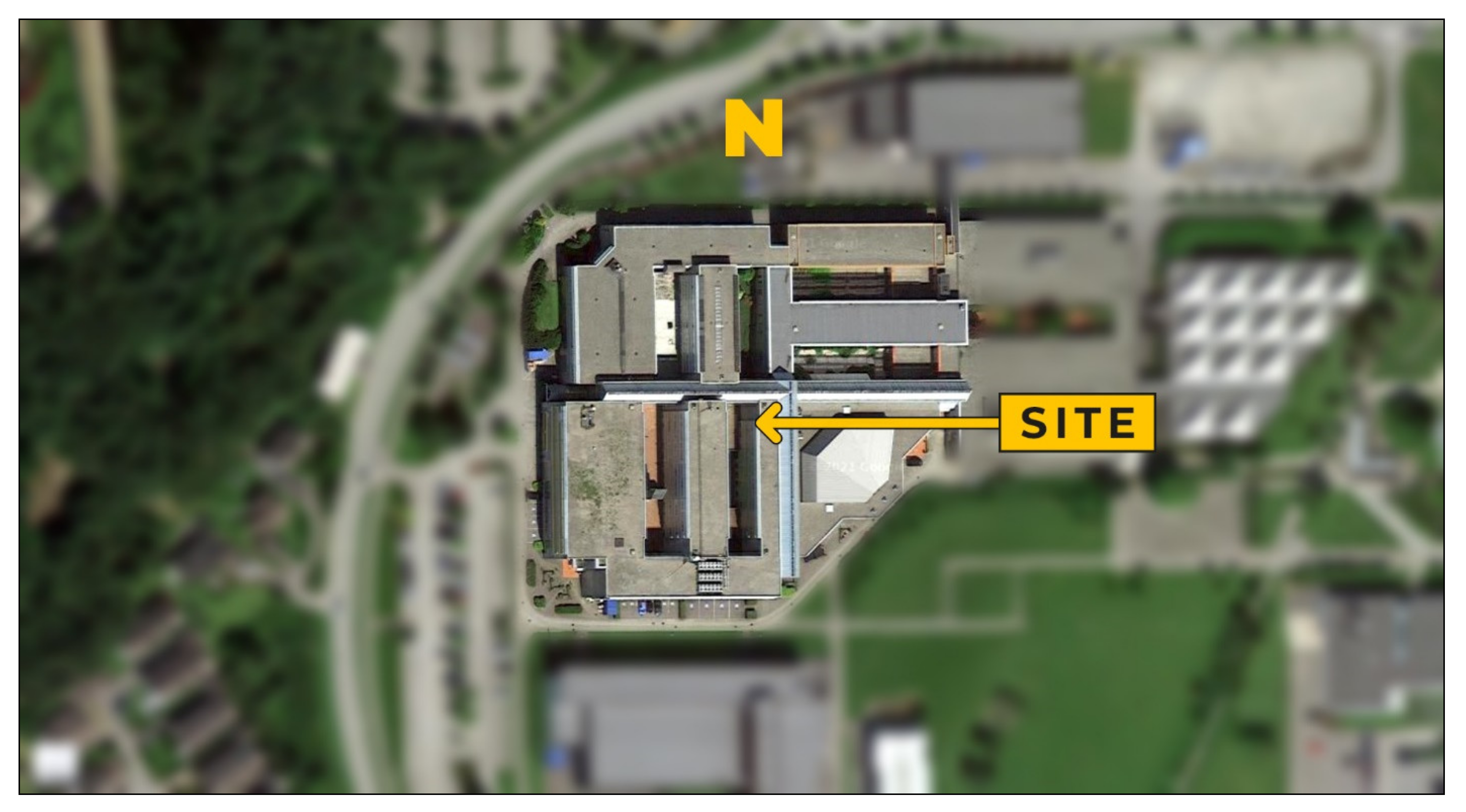 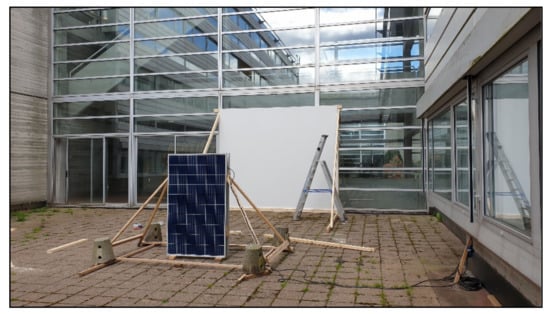 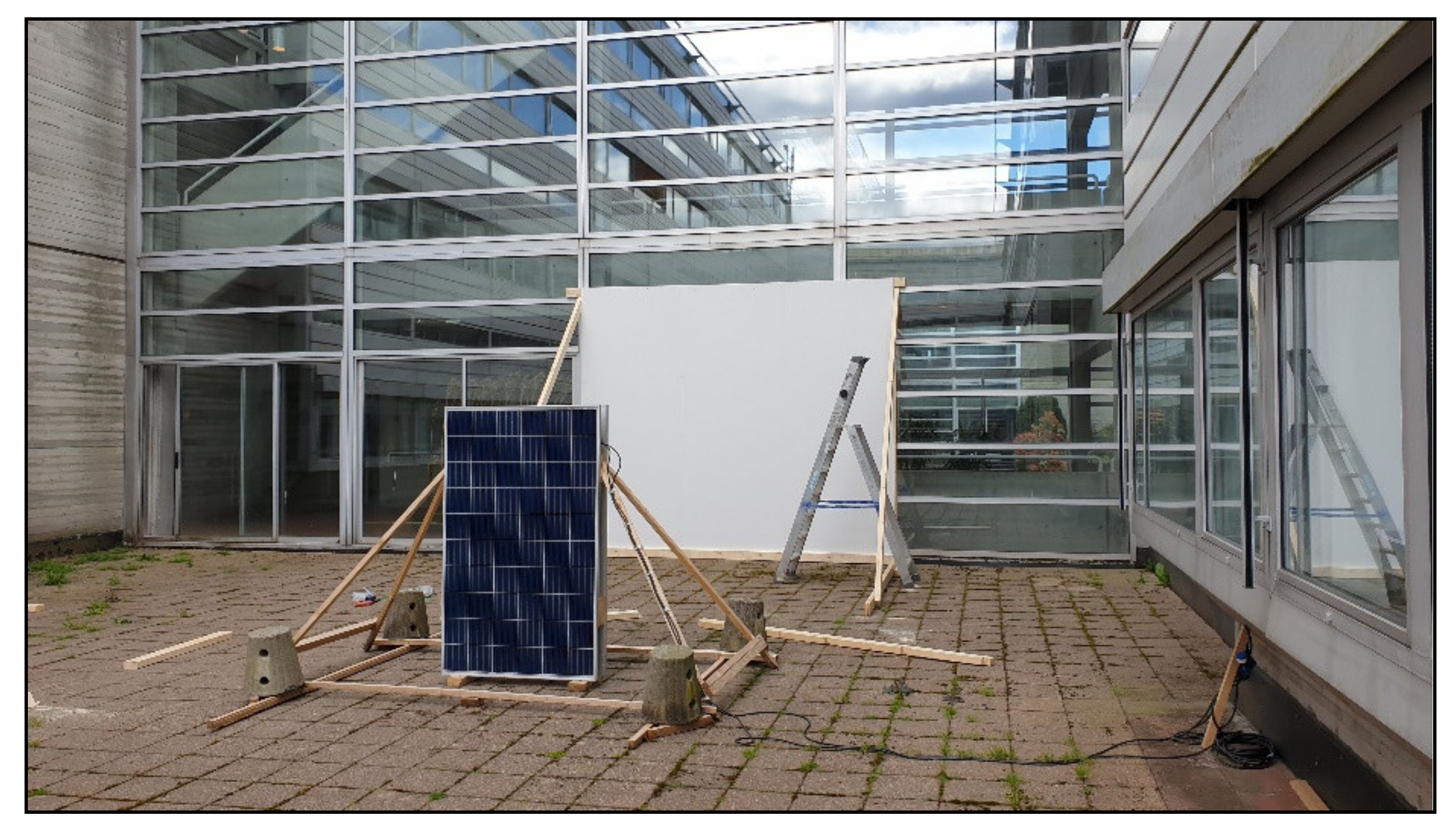 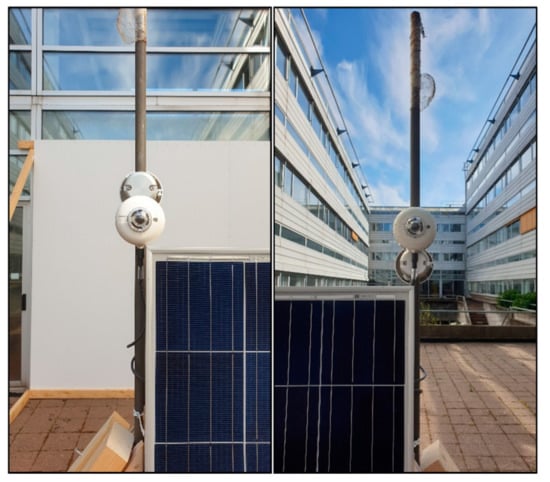 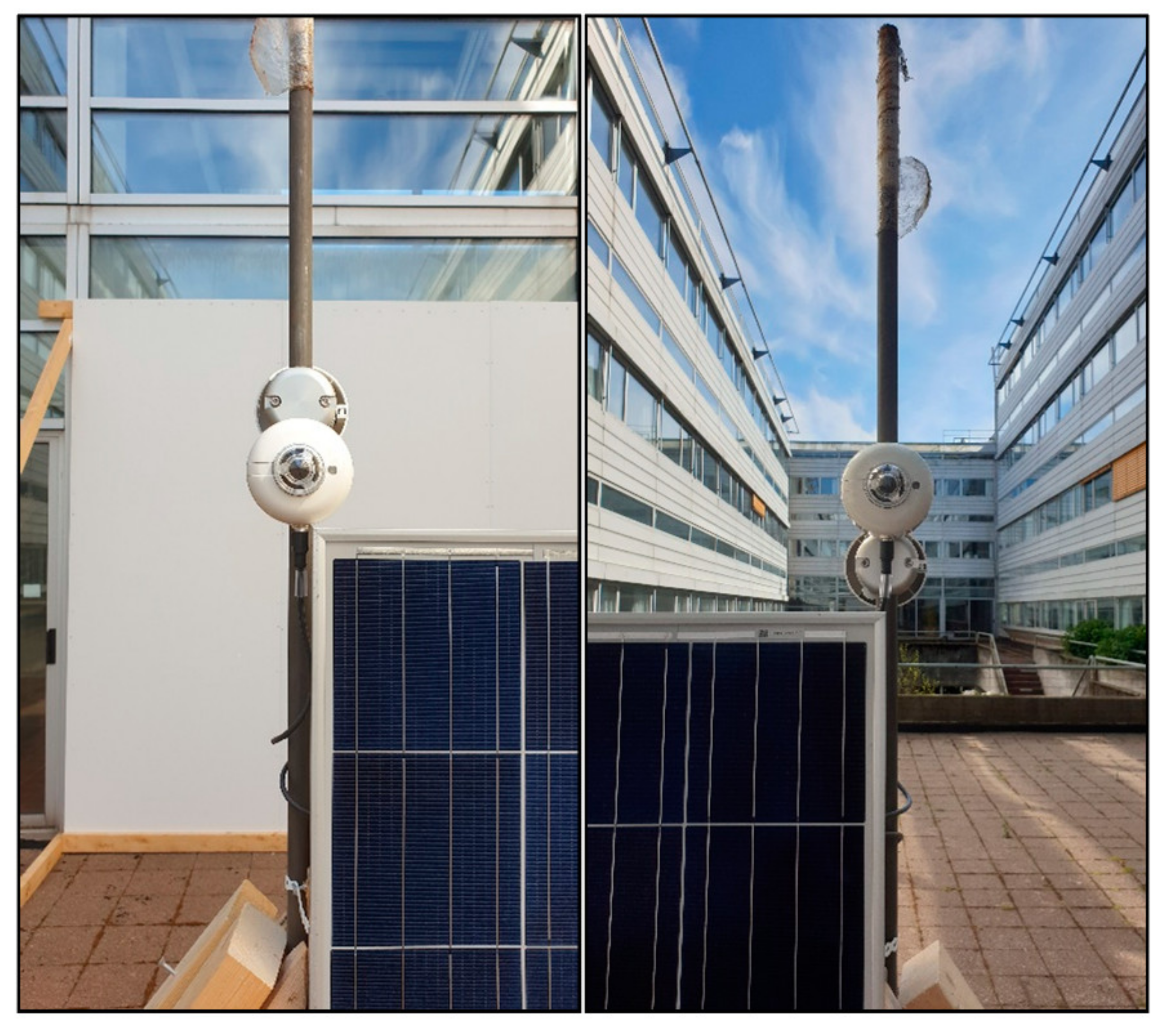 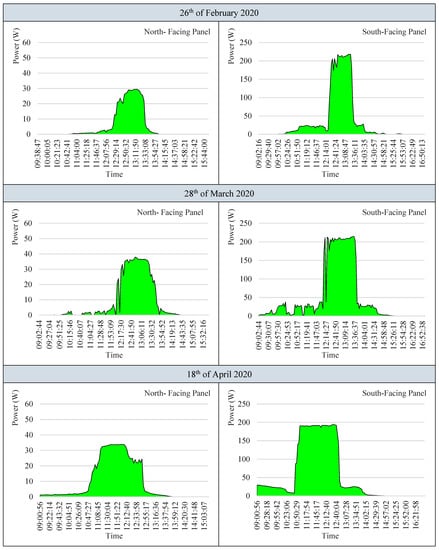 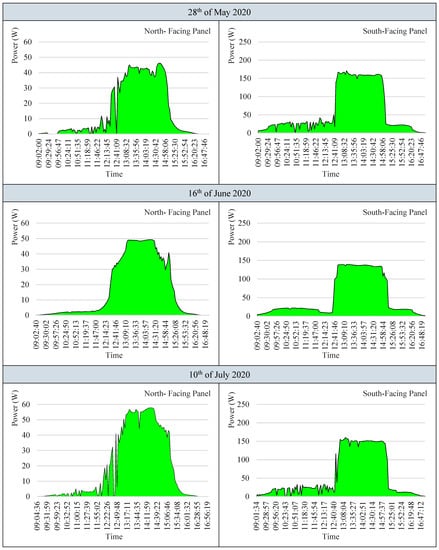 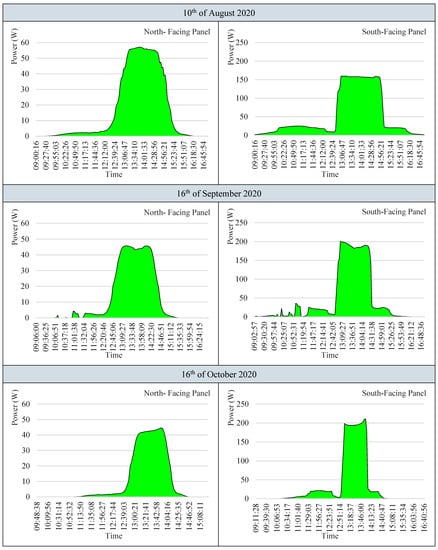 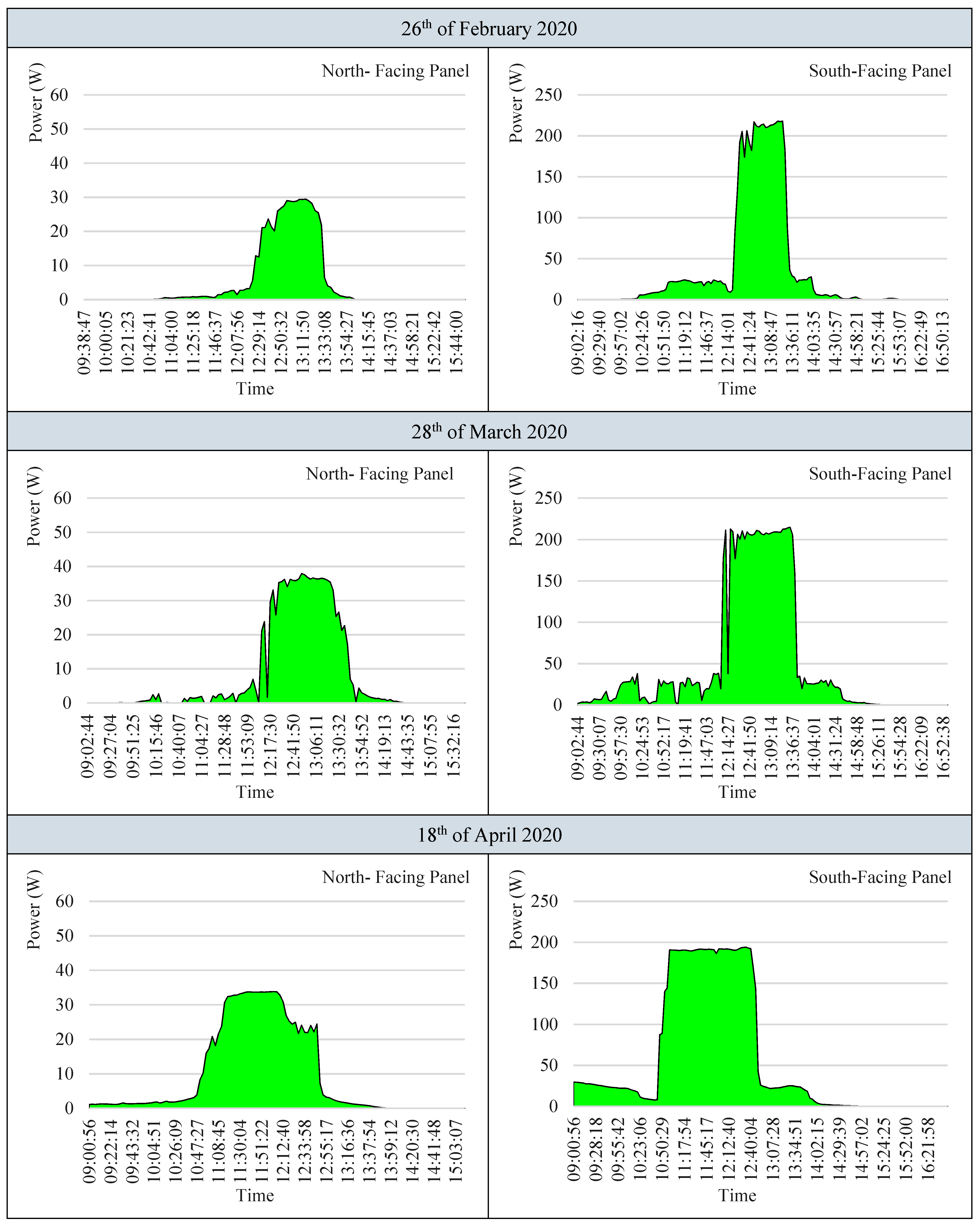 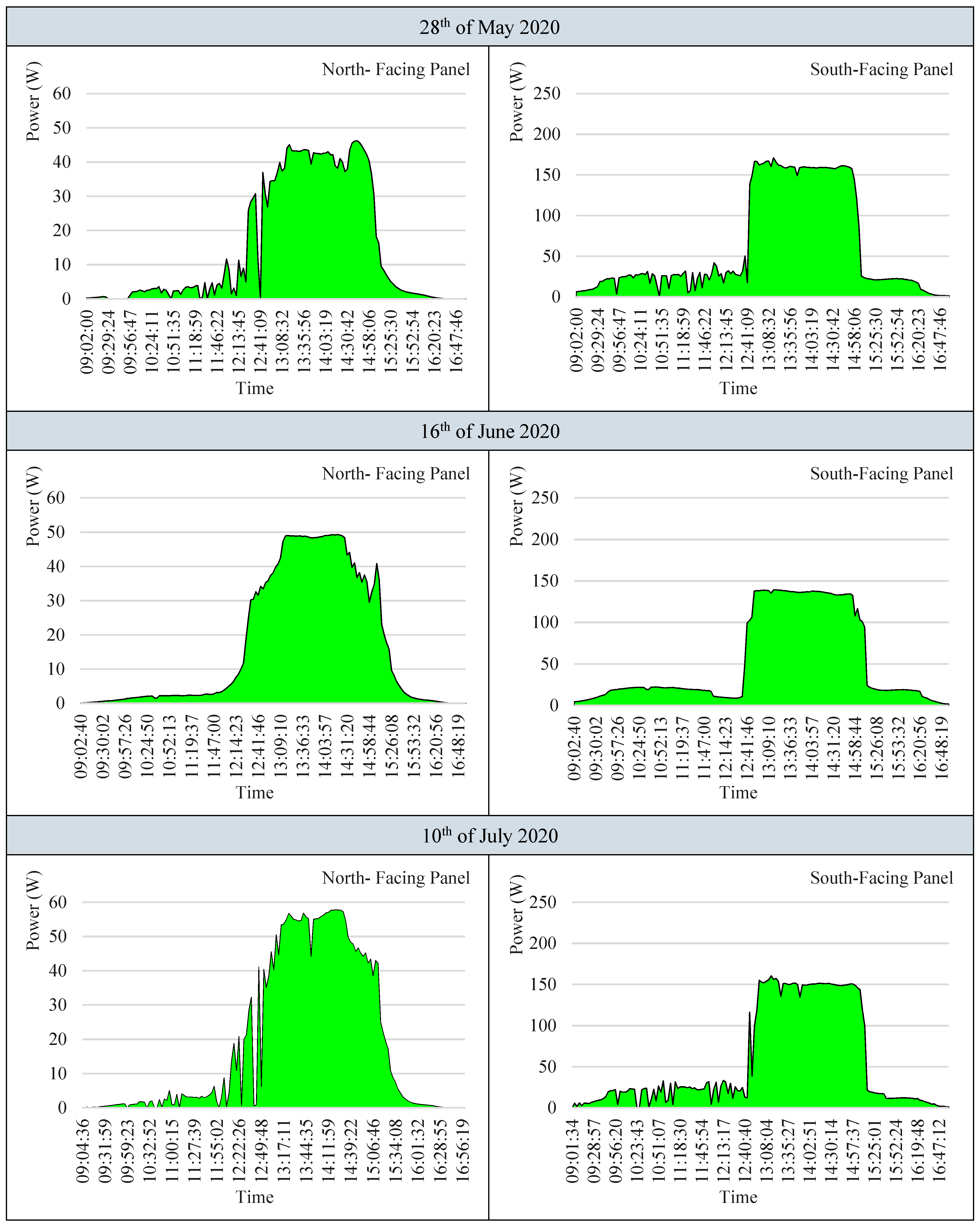 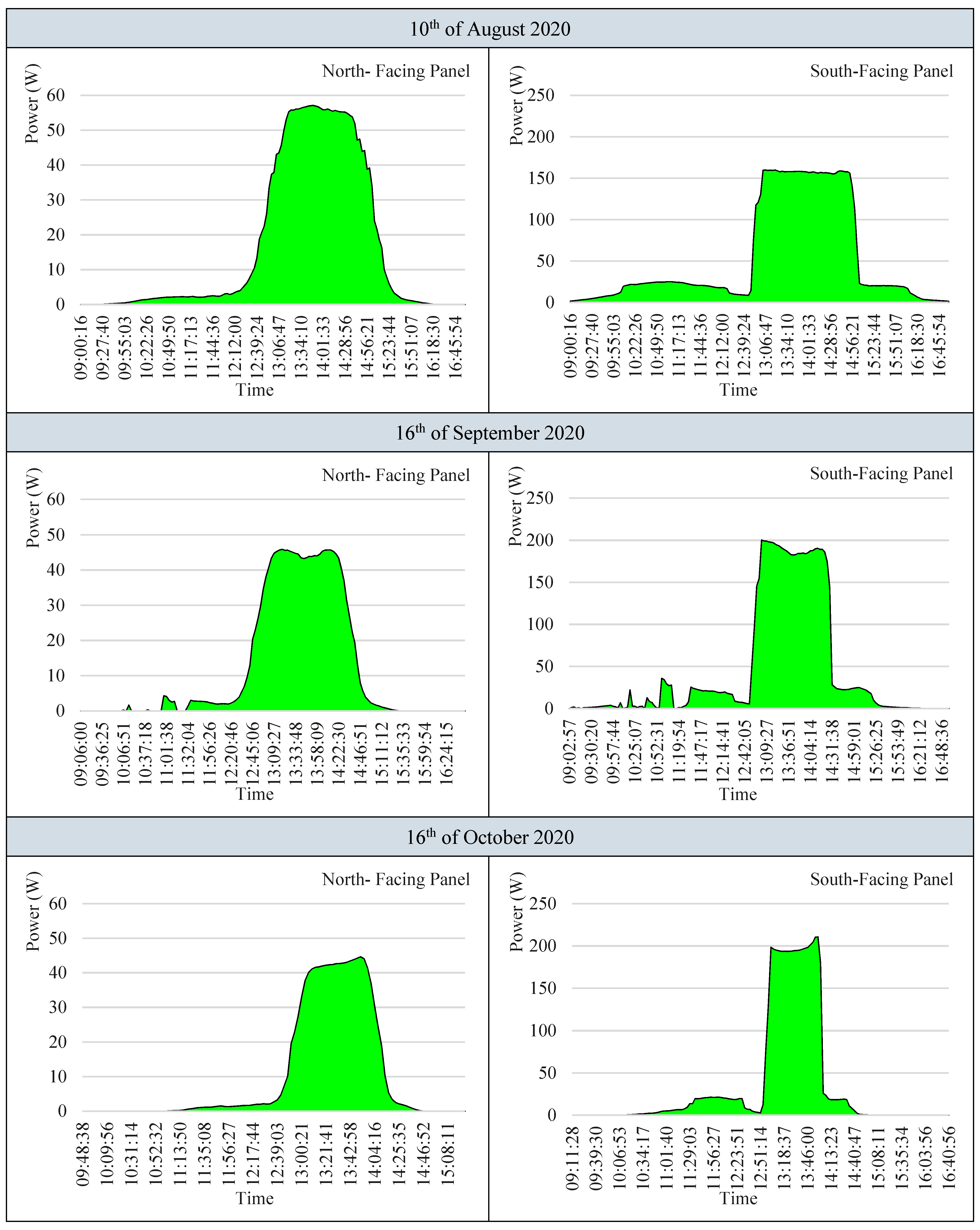 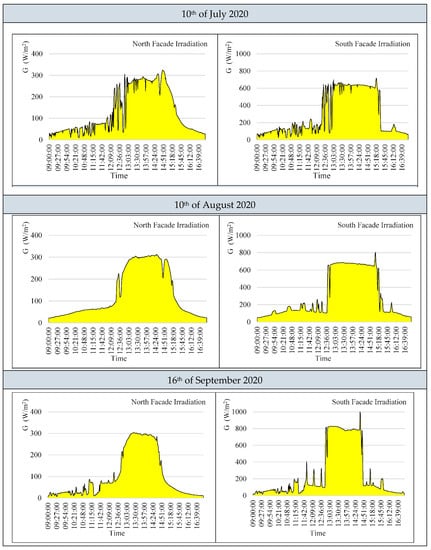 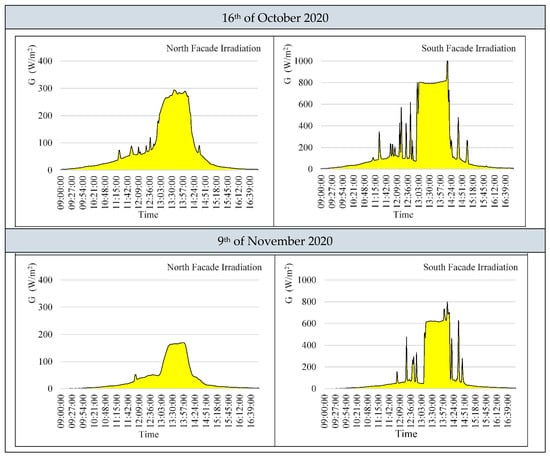 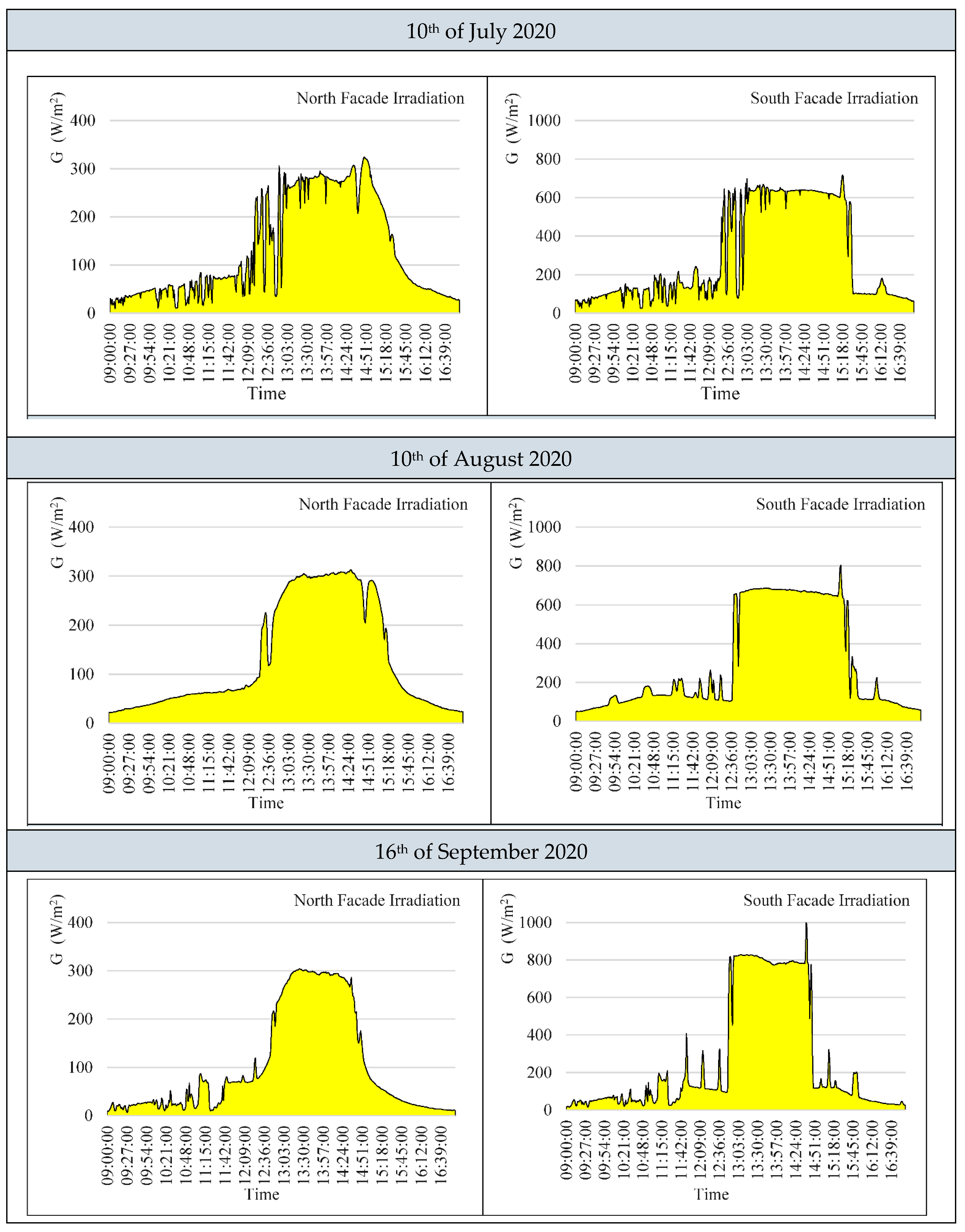 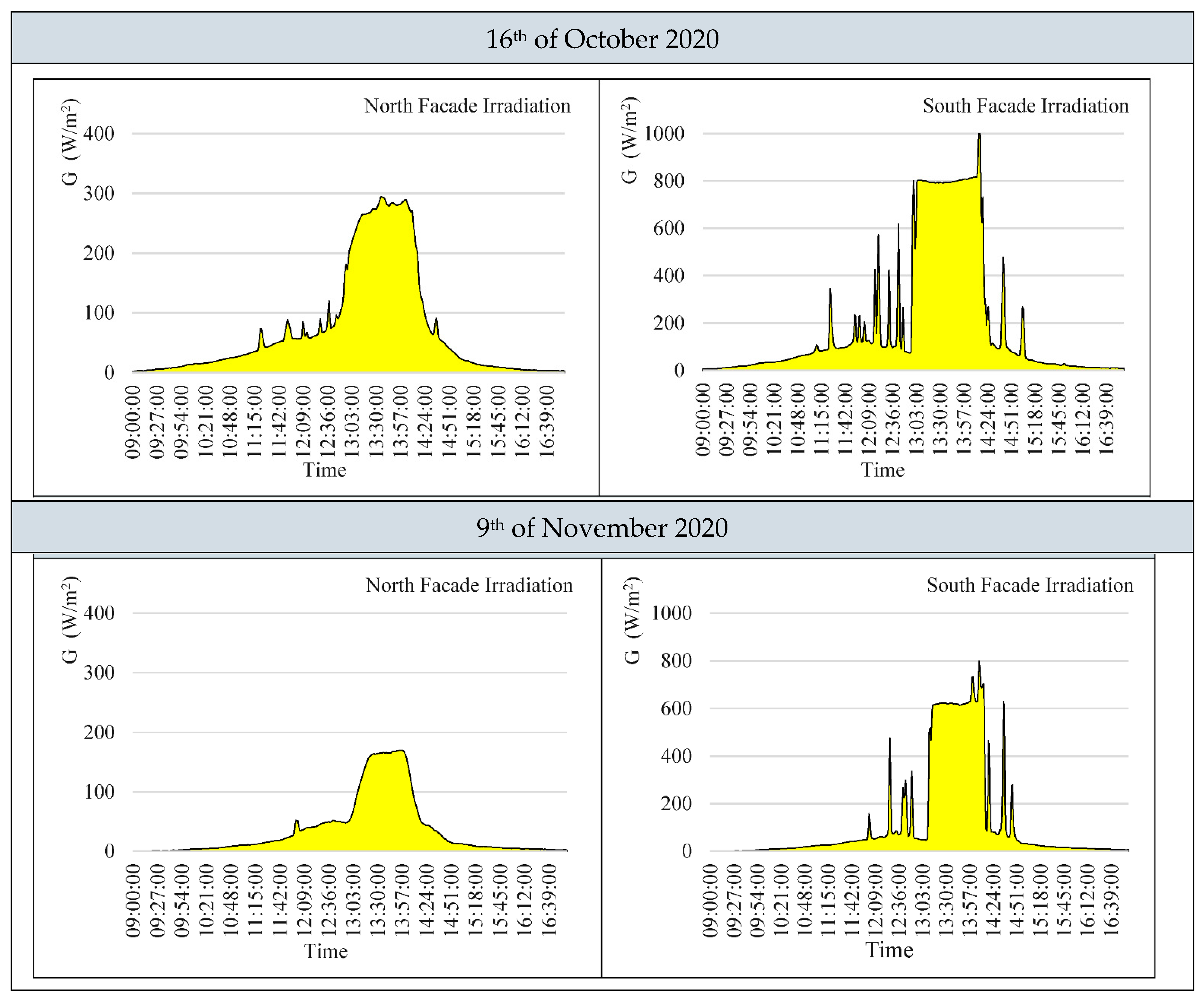 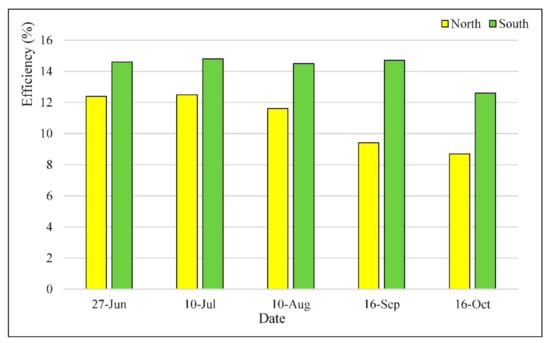 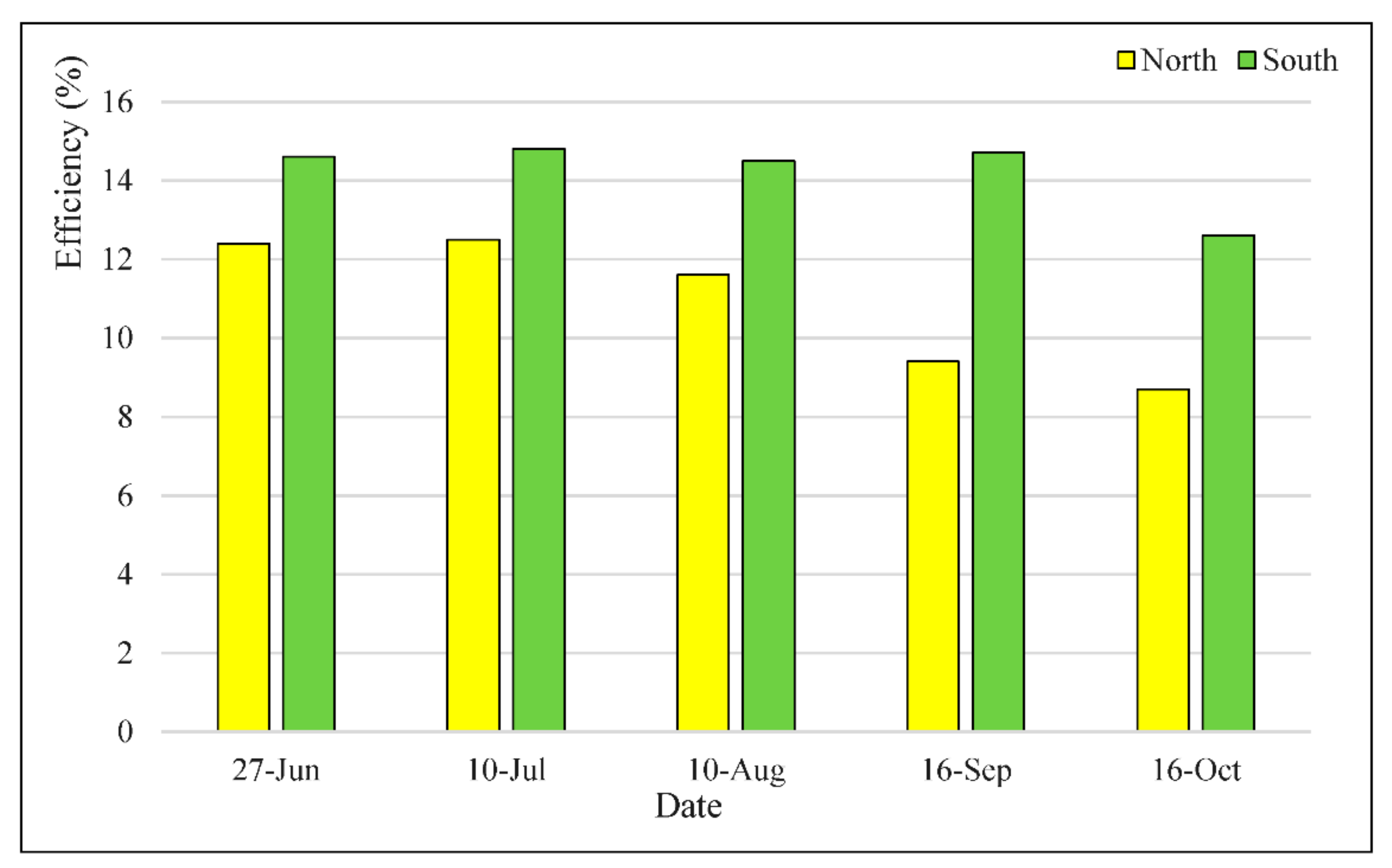 Table 2. List of system components.
Table 2. List of system components.
© 2021 by the authors. Licensee MDPI, Basel, Switzerland. This article is an open access article distributed under the terms and conditions of the Creative Commons Attribution (CC BY) license (https://creativecommons.org/licenses/by/4.0/).
We use cookies on our website to ensure you get the best experience. Read more about our cookies here.
Accept
We have just recently launched a new version of our website. Help us to further improve by taking part in this short 5 minute survey here. here.
Never show this again