Molecular Detection of Nosema spp. in Honey in Bulgaria
Previous Article in Journal

The deformed wing virus (DWV) is one of the most common honey bee pathogens. The virus may also be detected in other insect species, including Bombus terrestris adults from wild and managed colonies. In this study, individuals of all stages, castes, and sexes were sampled from three commercial colonies exhibiting the presence of deformed workers and analysed for the presence of DWV. Adults (deformed individuals, gynes, workers, males) had their head exscinded from the rest of the body and the two parts were analysed separately by RT-PCR. Juvenile stages (pupae, larvae, and eggs) were analysed undissected. All individuals tested positive for replicative DWV, but deformed adults showed a higher number of copies compared to asymptomatic individuals. Moreover, they showed viral infection in their heads. Sequence analysis indicated that the obtained DWV amplicons belonged to a strain isolated in the United Kingdom. Further studies are needed to characterize the specific DWV target organs in the bumblebees. The result of this study indicates the evidence of DWV infection in B. terrestris specimens that could cause wing deformities, suggesting a relationship between the deformities and the virus localization in the head. Further studies are needed to define if a specific organ could be a target in symptomatic bumblebees. View Full-Text
Keywords: bumblebee; commercial Bombus terrestris; spillover; DWV; honey bee pathogens; replicative virus; strand-specific RT-PCR bumblebee; commercial Bombus terrestris; spillover; DWV; honey bee pathogens; replicative virus; strand-specific RT-PCR
►▼ Show Figures 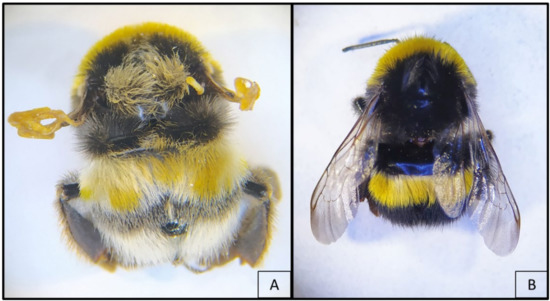