Giardia duodenalis is one of the most widely occurring zoonotic protozoan parasites causing diarrheal disease in calves. This study aimed to investigate the prevalence of G. duodenalis in Korean native calves and elucidate the causal factors associated with giardiasis in these animals. We investigated the sequences of three genes (ssu, bg, and gdh) of G. duodenalis in fecal samples collected from 792 Korean native calves during 2019–2020. Data were analyzed with regard to age, sex, sampling season, and the fecal sample type (based on its physical characteristics). The samples were screened for the three genes mentioned above, and 44 samples (5.6%) were G. duodenalis-positive. Polymerase chain reaction results showed a significantly higher prevalence of the infection in calves aged ≥1 month and in those with watery diarrhea in spring season. Screening for the gene sequences ssu (87.5%), bg (96.2%), and gdh (96.7%) revealed that most of the G. duodenalis-positive samples belonged to assemblage E. Four of the G. duodenalis-positive samples belonged to the zoonotic assemblage A. This study highlights the importance of continuous surveillance of genetic mutations in G. duodenalis for the detection of emerging variants of zoonotic G. duodenalis in calves. View Full-Text
Keywords: Giardia duodenalis; assemblage; multilocus genotyping; calves; zoonotic infection Giardia duodenalis; assemblage; multilocus genotyping; calves; zoonotic infection
►▼ Show Figures 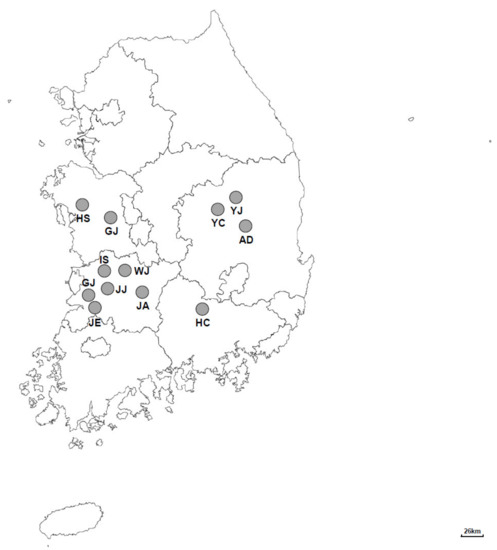