Pathology of the Aorta and Aorta as Homograft

The aorta is not a rigid tube, it is an “organ” with lamellar units, consisting of elastic fibers, extracellular matrix and smooth muscle cells in between as parenchyma. Several diseases may occur in the natural history of the aorta, requiring replacement of both semilunar cusps and ascending aorta. They may be congenital defects, such as bicuspid aortic valve and isthmal coarctation with aortopathy; genetically determined, such as Marfan and William syndromes; degenerative diseases, such as atherosclerosis and medial necrosis with aortic dilatation, valve incompetence and dissecting aneurysm; inflammatory diseases such as Takayasu arteritis, syphilis, giant cell and IgM4 aortitis; neoplasms; and trauma. Aortic homografts from cadavers, including both the sinus portion with semilunar cusps and the tubular portion, are surgically employed to replace a native sick ascending aorta. However, the antigenicity of allograft cells, in the lamellar units and interstitial cells in the cusps, is maintained. Thus, an immune reaction may occur, limiting durability. After proper decellularization and 6 months’ implantation in sheep, endogenous cell repopulation was shown to occur in both the valve and aortic wall, including the endothelium, without evidence of inflammation and structural deterioration/calcification in the mid-term. The allograft was transformed into an autograft. View Full-Text
Keywords: aorta; homograft; semilunar valves aorta; homograft; semilunar valves
►▼ Show Figures 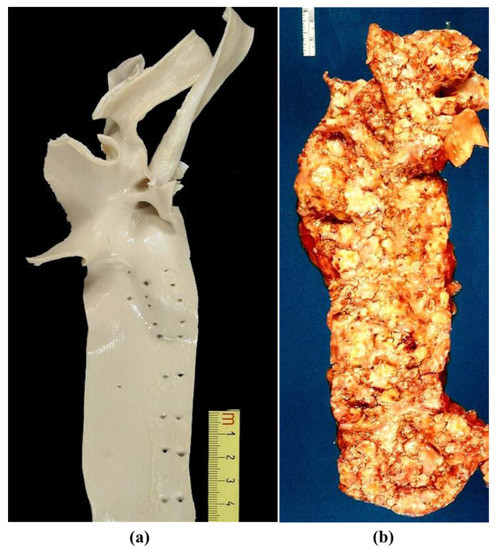