Exosomes in Immune Regulation
Next Article in Special Issue

The Role of lncRNAs in Gene Expression Regulation through mRNA Stabilization

Gene expression and translation is influenced by messenger RNA (mRNA) stability in almost all living organisms. mRNA from bacterial cells can last from seconds to more than one hour, but on average it stays functional between 1 and 3 min [1,2]. Conversely, the lifetime of mammalian mRNA ranges from a couple of minutes to even days, making eukaryotic mRNA more stable than bacterial mRNA. However, from bacteria to mammals, mRNA lifetime needs to be finely regulated in order to enable correct cell homeostasis [1]. The control of the abundance of a particular mRNA fluctuates to adapt to environmental changes, cell growth, differentiation, or to adjust to an unfamiliar situation [3,4]. In this line, the regulation of mRNA stability is essential for tissues and organs exposed to stress signals, such as starvation, infection, inflammation, toxins, or tissue invasion by immune cells [5,6].
The levels of mRNA molecules in the cell are determined by a balance between production and decay [7,8]. Maintaining an accurate balance is crucial for the correct function of a wide variety of biological processes and for the maintenance of an appropriate cellular homeostasis. Many variables such as primary and secondary structure, translation rate and location, among others, influence mRNA stability [5,9,10], and thus minor changes in the structure or the sequence of mRNA molecules might directly influence their half-life.
Eukaryotic mRNAs are transcribed in the nucleus, they are capped (7-methylguanosine cap in 5′end), spliced, polyadenylated (poly(A) tail in 3′end), and lastly, mature mRNAs are exported to the cytoplasm where they are translated into the corresponding polypeptides [1]. Once in the cytoplasm, the 5′cap and the 3′tail serve to attract specific protein complexes that regulate mRNA stability, via protecting mRNA molecules from the attack of ribonucleases and decapping enzymes [1,9,11].
In the last few years, significant progress has been made towards the understanding of mRNA degradation and stability. In general, the decay of mRNA molecules in eukaryotic cells starts with the deadenylation and/or decapping of the mature mRNA, followed by degradation carried out by exonucleases [12,13,14,15]. However, the regulation of mRNA stability depends largely on how a three step process (deadenylation, decapping, and degradation) is modulated by regulatory factors, and thus these factors should be taken into account when analyzing the regulation of mRNA stability. Indeed, several studies have pointed out the key role of RNA-binding proteins and miRNAs in the regulation of this process [7,9,16,17]. In addition, long non-coding RNAs (lncRNAs) are emerging as prominent regulators of mRNA stability and decay [3,4,18,19,20,21]. LncRNAs are RNA molecules without protein coding potential with lengths exceeding 200 nucleotides [22]. They play important roles in biological processes such as chromatin remodeling, transcriptional activation and interference, RNA processing, and mRNA translation [23]. Regarding their mechanisms of action, different models have been proposed, including functioning as signal, decoy, scaffold, guide, and enhancer RNAs [24]. Importantly, the expression of lncRNAs occurs in a cell-, tissue-, and species-specific manner, and accumulating evidence suggests that different splice variants of individual lncRNAs are also expressed in a cell-, tissue-, and species-specific way [25].
In this review we provide an overview of the main molecular mechanisms by which lncRNAs modulate mRNA stability and gene expression (Figure 1). A detailed description of how lncRNAs interact with target mRNAs, RNA binding proteins or miRNAs to avoid mRNA degradation is provided and a brief explanation on how lncRNAs modulate epitranscriptomic changes to impact on mRNA stability is also described.

3. Interaction between lncRNAs and RBPs in mRNA Stabilization

RNA modifications have been recently involved in the regulation of mRNA stability and it has been stated that the regulation of mRNA stability through RNA modification is a crucial step for the tight regulation of gene expression [109]. N6-methyladenosine (m6A) methylation is the most prevalent RNA modification in mRNAs and noncoding RNAs, and it has been involved in a wide range of RNA metabolic processes, including stability [110].
YTHDF2, an m6A reader protein, has been described to selectively bind to m6A-containing mRNAs, resulting in the localization of bound mRNAs from the translatable pool to cellular mRNA decay sites, such as processing bodies [110]. In contrast to the mRNA-decay-promoting function of YTHDF2, insulin-like growth factor 2 mRNA-binding proteins (IGF2BPs) promote the stability and storage of target mRNAs in an m6A-dependent manner [111]. The opposite role of IGF2BPs versus YTHDF2 imposes an additional layer of complexity on m6A function. IGF2BPs and YTHDF2 may recognize different targets or compete for the same m6A sites to fine-tune expression of shared targets through controlling the balance between mRNA stabilization and decay [111]. On the other hand, another m6A reader protein, YTHDF1, actively promotes protein synthesis by interacting with the translation machinery [112]. Altogether, YTHDF2 and IGF2BPs control the lifetime of target transcripts, whereas YTHDF1-mediated translation promotion increases translation efficiency.
In this context, there are few works describing lncRNAs influencing m6A-mediated mRNA stability. GAS5-AS1 interacts with the tumor suppressor GAS5 and increases its stability by influencing the interaction between GAS5 mRNA and the RNA demethylase ALKBH5 leading to a decreased GAS5 m6A methylation. Moreover, it was shown that m6A-mediated GAS5 mRNA degradation relies on YTHDF2-dependent pathway [113]. LINC00470 associates with PTEN mRNA and suppresses its stability through interaction with the m6A writer METTL3. In addition, LINC00470-METTL3-mediated PTEN mRNA degradation also relies on YTHDF2 [114]. Lastly, LIN28B-AS1 is able to regulate mRNA stability of LIN28B by directly interacting with IGF2BP1 but not with LIN28B, as IGF2BP1 affects LIN28B mRNA stabilization [115].
In the context of mRNA-lncRNA interactions, lncRNA LNC942, upregulated in breast cancer, has been described to interact with the methylase METTL4 driving it to the mRNA of target genes CXCR4 and CYP1B1. These two genes are involved in breast cancer initiation and progression, and their methylation augments the stability of the mRNA molecules, which results on higher protein levels and induction of tumorigenesis [115] probably due to an increased interaction with IGF2BP and YTHDF1 readers.

Correct tuning of mRNA stability is a crucial process to maintain appropriate homeostasis, and thus its dysregulation may lead to the development of several pathologies, including cancer. Stability of mRNA molecules is tightly regulated by several mechanisms, including the action of lncRNA molecules. During the last few years, lncRNAs have been implicated in the modulation of mRNA stability and several mechanisms of action have been described. On the one hand, they can prevent miRNA- and RBP-binding to target mRNAs by blocking target binding sites through direct lncRNA-mRNA interaction. On the other hand, they can sequester miRNAs and RBPs to avoid their interaction with target mRNAs, or to inhibit RBP-driven posttranscriptional modifications that affect mRNA stability. Thus, lncRNAs have emerged as crucial regulators of mRNA stability, another molecular mechanism by which these non-coding molecules participate in the regulation of gene expression.
Taking into account that lncRNAs play important roles in the regulation of mRNA stability, the functional characterization of the molecular mechanisms by which these non-coding molecules participate on mRNA equilibrium maintenance will open the door to the development of new lncRNA-based strategies to modify mRNA half-life and subsequent protein expression. Additionally, the functional understanding of lncRNAs that regulate mRNA stability in non-mammalian organisms as Drosophila melanogaster or zebrafish, which are easier to genetically manipulate, will help find human orthologous lncRNAs important in mRNA biology. As described formerly in this review, lncRNA-driven mRNA stability changes might impact several biological processes which are important, in both, health and disease. Thus, a better understanding of how lncRNAs act on mRNA stability will provide useful information for the development of new therapeutic strategies to treat and/or cure several diseases in which a dysregulated gene expression pattern is responsible of their development. 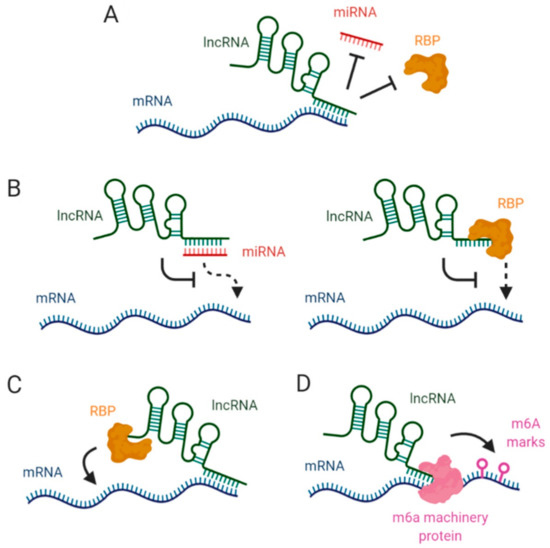 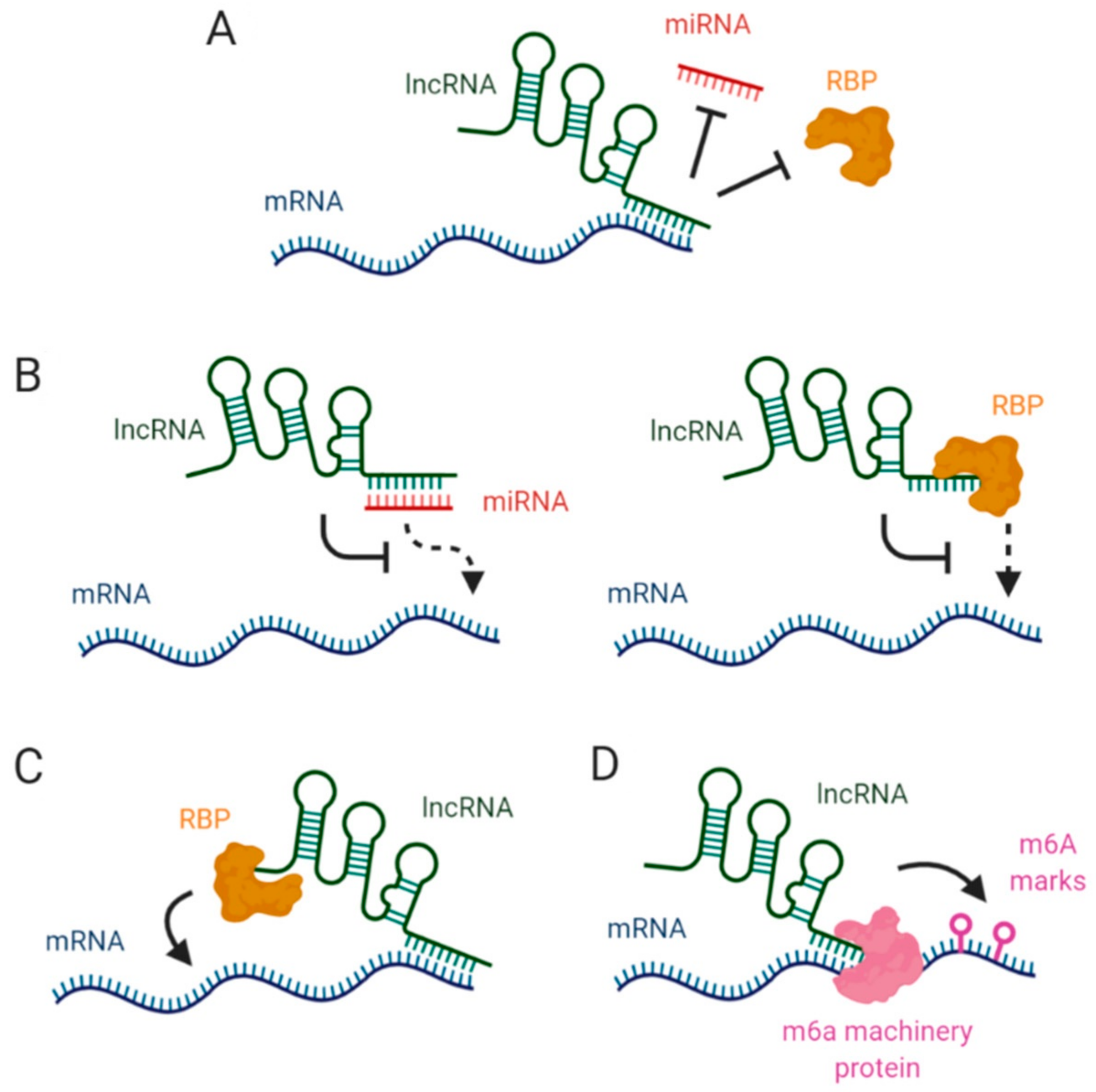