In this research, two types of biomass were used: chips from spruce and birch were carbonized at Carbofex carbonization plant in Tampere, Finland. The carbons were dried in an oven, milled in a ceramic ball mill, and sieved to particle sizes less than 2 mm in order to minimize eventual fluctuations in the composition of individual particles. Finally, the carbons were steam activated for 2 and 4 h. These carbons were used for the two-stage process.
Wooden chips of spruce and birch used in the one-stage process were dried, milled, and sieved to particle sizes less than 2 mm. The sieved woods were carbonized and steam-activated in a one-stage process using activation times of 2 and 4 h.
About 10 g of each sample were placed into a fixed-bed steel reactor inserted into a tubular oven. The samples inside the reactor were supported on both sides by quartz wool. For the carbon samples, the temperature of the oven was raised from room-temperature to 1023 K over a 30 min period followed by a slow increase of 6 K min−1 to 1073 K. For the wood samples, a 120 min increase from room temperature to 1073 K was applied. At 1073 K, the samples were steam-activated by feeding water into the reactor at a speed of 30 cm3 h−1 for 2 or 4 h. The reactor was flushed with an inert gas, nitrogen, during the whole process in order to avoid oxidation of the samples. The carbons produced were characterized by a number of methods including yield, total carbon content (TC), specific surface area, and pore size distribution. The samples were named according to Table 2.

The yield for each sample was calculated as:
According to the producer of the carbons, the yield from carbonization was 30% calculated on a dry mass basis.

The percentage of total carbon present in each sample was measured using a Skalar Primacs MCS instrument (Skalar, Breda, The Netherlands). Dried samples were weighted in quartz crucibles, combusted at 1373 K in a pure oxygen atmosphere, and the formed CO2 was analyzed by an infra-red (IR) analyzer (Skalar, Breda, The Netherlands). Carbon content values were obtained by reading the signal of the IR analyzer from a calibration curve derived from known masses of a standard substance, citric acid. The total mass of carbon in each sample was calculated as a percent of the mass initially weighed. With the instrumental method used, the precision of the measurements is in the range of 5%. Standard deviation for parallel measurements (n = 5) was 1.5%.

Specific surface areas (SSA) and pore distributions were determined from the adsorption-desorption isotherms using nitrogen as the adsorbate. Determinations were performed with Micromeritics ASAP 2020 instrument (Micromeritics Instrument, Norcross, GA, USA). Portions of each sample (100–200 mg) were degassed at low pressure (2 µm Hg) and at a temperature of 413 K for two hours in order to clean the surfaces and remove any gas adsorbed. Adsorption isotherms were obtained by immersing sample tubes in liquid nitrogen (77.15 K) to achieve constant temperature conditions. Gaseous nitrogen was added to the samples in small doses, and the resulting isotherms were obtained. Specific surface areas and total pore volumes were calculated from adsorption isotherms according to the BET (Brunauer–Emmett–Teller) method [26], while the pore size distribution was calculated using the DFT (Density Functional Theory) [27] algorithm assuming slit-formed pores [28]. Total pore volumes for the BET method were calculated at a P/P0 ratio of 0.985 and in the case of the DTF calculation, as the total volume of pores measured at a P/P0 ratio of 0.985. The % distribution of pore volumes was calculated from the individual volumes of µ-pores, meso-pores, and macro-pores. With the instrumental setup used, micro-pores down to 1.5 nm in diameter could be measured, even if there might have been some contribution from smaller pores. The µ-pore areas and volumes were calculated by the t-plot algorithm and the surface areas at low P/P0 ratios were calculated as Langmuir surface areas. According to previous works, the SSAs were measured with a precision of ±5% [29].

3.1. Yield and Total Carbon Content from the Activation and Carbonization-Activation Processes

The adsorption isotherms for the carbonized starting materials, two-stage and one-stage activated spruce and birch, are presented in Figure 1A–C. The isotherms for the precursors of birch and spruce (Figure 1C) both have low adsorption capacity, this is reflected in the SSA presented in Table 4. There appears to be some difference in the shapes for the adsorption isotherms for the samples prepared in the one-stage and two-stage processes (Figure 1A,B). This can also be seen as a difference in pore size distributions as presented in Table 4. In particular, Type I and Type II shape isotherms can be noticed between the ACs prepared with different starting materials. The one-stage prepared, activated carbon follows a Type I isotherm indicating a more microporous carbon, while the two-stage AC presents a Type II adsorption isotherm more typical of meso-porous material. The raw carbon shows a Type I isotherm with a lower level of volume adsorbed. These results are similar to the DFT model as presented in Table 4, where it is evident that there is a high micro-porosity of the carbonized biomass but a higher meso-porosity in the activated carbon prepared in the two-stage process (about 10% more).
The results of the different times used for the activation, 2 and 4 h, can be seen as changes in the specific surface areas in Table 4. As one can expect, a longer activation time increases the SSA, this is evident for ACs prepared both in the one-stage and the two-stage processes. This can be seen more clearly in ACs produced from birch than spruce.
A longer activation time appears to increase both the total pore volumes (BET model) and the micro-pore-volumes (t-plot and DFT model) for all samples independent of the starting materials, except for one-stage activated birch. A longer activation time affects the pore-size distributions. Most likely, some micro-pores are changed to meso-pores at longer activations by modification of the structure, but there are no clear trends.
In Table 4 it is also evident from the t-plot model that a predominant part of the surface area of the one-stage produced activated carbon derives from the micro-pore region with the holding time with steam increasing the meso-porosity, as known. Therefore, it seems that not only the process parameters but also the sequence in activation has an impact in the AC porosity.
According to the results, activated carbons produced in a one-stage and a two-stage process have different properties regarding specific surface areas, pore volumes, and pore size distributions. The reasons for the differences is speculative only but might be due to the carbonization reactions and the breakdown of the structures in the wood. Additionally, contact with air might change the properties of the surface of the bio-chars, making them less sensitive to the activating agent.
In the industrial production of the bio-chars, a continuous process was used, while the laboratory tests were performed in a fixed bed reactor in batch mode; the process parameters used might affect the properties of the ACs produced. Further tests using chemical activation with different activating agents could be performed to find out if the differences are related to the properties of the precursors used, to the activating process itself, or to the activating agent.

It is well known that the biomass used for the carbonization and activation in the production of activated carbons is one of the most important factors regarding the properties of the end-product. In this study, a comparison between two different routes in the production of ACs for activating carbon were performed. The results presented give some new understanding of the parameters influencing the production of ACs with different properties.
According to the results, there are differences in the properties of ACs produced in regard to process yield, specific surface area, and pore-size distribution. The differences can be related to the starting materials used for the activation, direct carbonization, and activation (one-stage) or pre-carbonization into bio-chars followed by activation (two-stage). Regarding the total carbon content in the ACs produced, there is no significant difference between one-stage and two-stage processes, but small differences between the starting materials can be seen. The yield is apparently higher using the two-stage process. ACs with higher surface areas are produced in the one-stage carbon activation process. The total pore volume of the one-stage process is, in general, higher compared to that of the two-stage process. Regarding the yields, there is also a difference between precursors used, the pore distribution presents a particular difference as evidenced by the adsorption isotherms t-plot and DFT model. According to the results, the treatment order of the precursors appears to have, in combination with the wood species used, the most significant effect on the properties of the activated carbons.

The study was supported by and performed within the projects Renepro (20200224) funded by Interreg Nord (H.R.) and BothniaBioraff (T.V.). Economical support was received from the Central Ostrobothnia Cultural Foundation (D.B.). 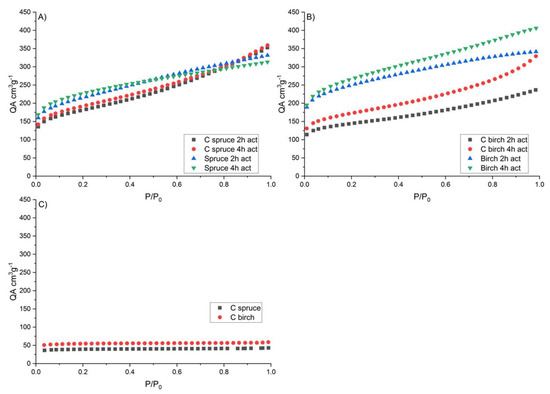 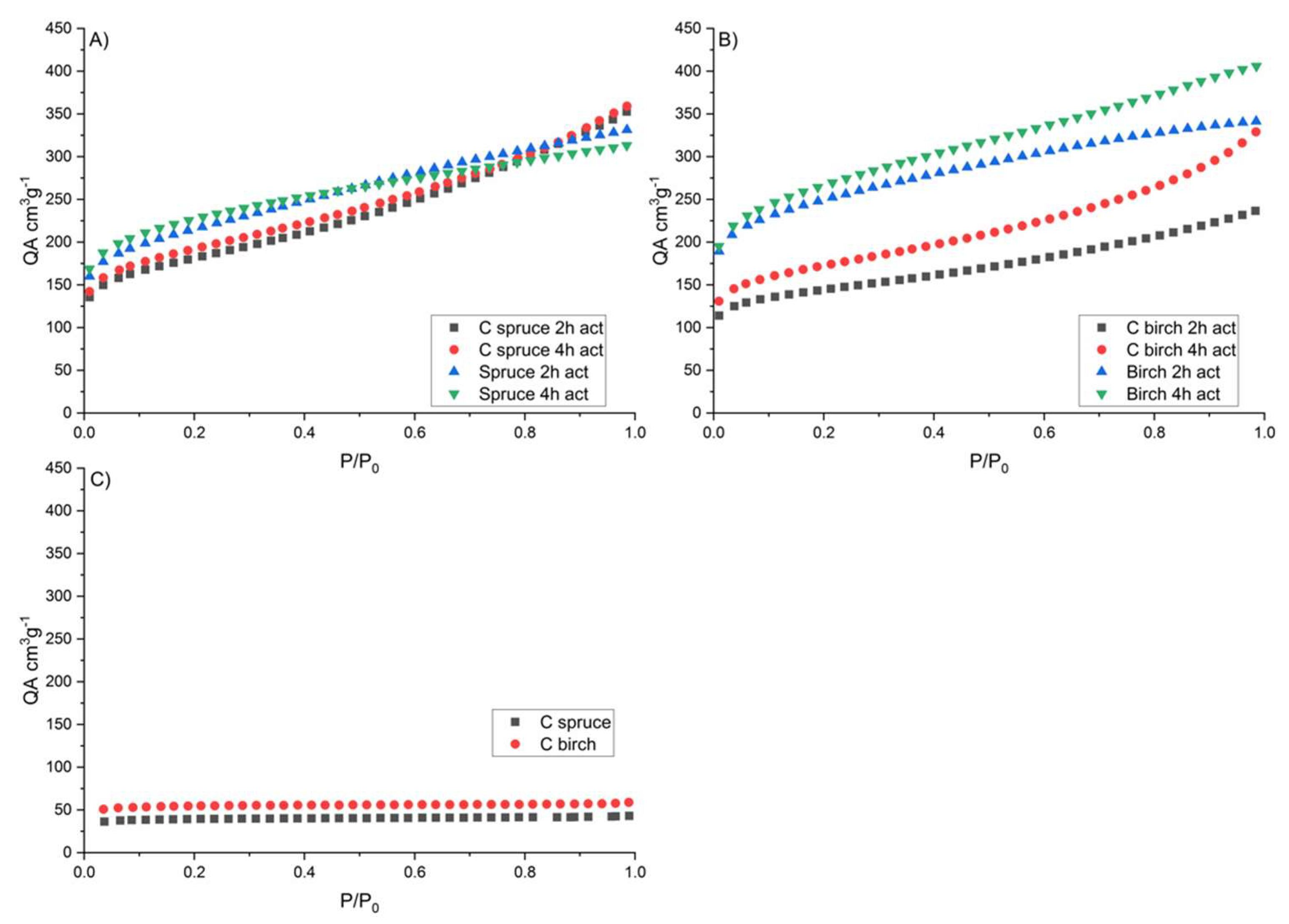