Synthesis, Spectroscopic Characterization and Photoactivity of Zr(IV) Phthalocyanines Functionalized with Aminobenzoic Acids and Their GO-Based Composites
Next Article in Special Issue

The Role of Functionalization in the Applications of Carbon Materials: An Overview

The carbon-based materials (CbMs) refer to a class of substances in which the carbon atoms can assume different hybridization states (sp1, sp2, sp3) leading to different allotropic structures -. In these substances, the carbon atoms can form robust covalent bonds with other carbon atoms or with a vast class of metallic and non-metallic elements, giving rise to an enormous number of compounds from small molecules to long chains to solids. This is one of the reasons why the carbon chemistry is at the basis of the organic chemistry and the biochemistry from which life on earth was born. In this context, the surface chemistry assumes a substantial role dictating the physical and chemical properties of the carbon-based materials. Different functionalities are obtained by bonding carbon atoms with heteroatoms (mainly oxygen, nitrogen, sulfur) determining a certain reactivity of the compound which otherwise is rather weak. This holds for classic materials such as the diamond, the graphite, the carbon black and the porous carbon but functionalization is widely applied also to the carbon nanostructures which came at play mainly in the last two decades. As a matter of fact, nowadays, in addition to fabrication of nano and porous structures, the functionalization of CbMs is at the basis of a number of applications as catalysis, energy conversion, sensing, biomedicine, adsorption etc. This work is dedicated to the modification of the surface chemistry reviewing the different approaches also considering the different macro and nano allotropic forms of carbon. View Full-Text
Keywords: carbon-based materials; carbon nanostructures; functionalization carbon-based materials; carbon nanostructures; functionalization
►▼ Show Figures 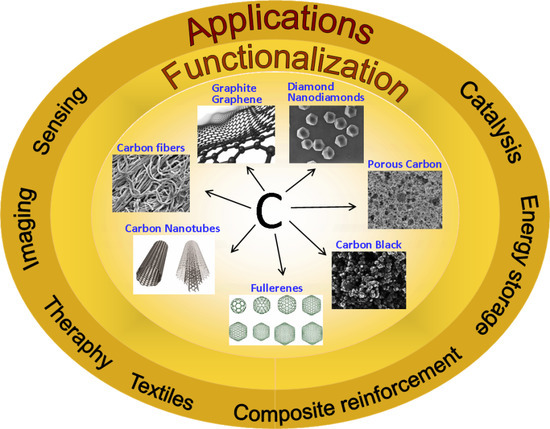