Nitrogen (N)-doped arginine carbon dots (Arg CD) were successfully synthesized using arginine as the amine source and citric acid as the carbon source via a one-pot green synthesis microwave-assisted technique in 2 min. Ag and Cu nanoparticles (NP) were generated within N-doped Arg CDs as composite Arg-Ag CDs and Arg-Cu CDs to render enhanced antibacterial properties. TEM analysis revealed that Arg CDs are in graphitic structures with d spacing ranging from 0.5 nm to 10 nm. The minimum inhibition concentration (MIC) values of Arg CDs with 6.250 mg/mL were decreased by about 100-fold for Arg-Ag CDs and ten-fold for Arg-Cu CDs with 0.062 and 0.625 mg/mL MIC values against Staphylococcus aureus (S. aureus). The highest antibacterial susceptibility was observed for the Arg-Ag CD composite with 0.125 and 0.312 mg/mL minimum bactericidal concentration (MBC) values against Gram negative S. aureus and Gram positive Escherichia coli (E. coli) bacteria strains, respectively. It was found that the metal NPs within Arg CDs significantly increased the antibacterial properties of CDs making them available in the treatment of infections caused by different bacterial species. Furthermore, Arg-Ag CD and Arg-Cu CD composites were tested for Acetylcholinesterase (AChE, E.C. 3.1.1.7) that break down acetylcholine (ACh) into choline and acetic acid leading to the loss of ACh which plays an essential role as neurotransmitter in Alzheimer disease. It was found that Arg-Cu CDs inhibited 74.9 ± 0.8% and Arg-Ag CDs inhibited 52.1 ± 3.8% of AChE at a 1.82 mg/mL concentration versus no inhibition for Arg-CD. Moreover, the chelating activity of Arg-Cu CDs and Arg-Ag CDs were tested for Fe(II) and it was found that almost 100% chelating was attained at 116 μg composites versus no measurable chelation for bare Arg CDs, suggesting the potential neurodegenerative disease treatment properties of these composite CDs in the brain. View Full-Text
Keywords: Arginine; nitrogen-doped carbon dots (CD); microwave treatment; metal nanoparticle composite CD; antimicrobial/AChE inhibitor Arginine; nitrogen-doped carbon dots (CD); microwave treatment; metal nanoparticle composite CD; antimicrobial/AChE inhibitor
►▼ Show Figures 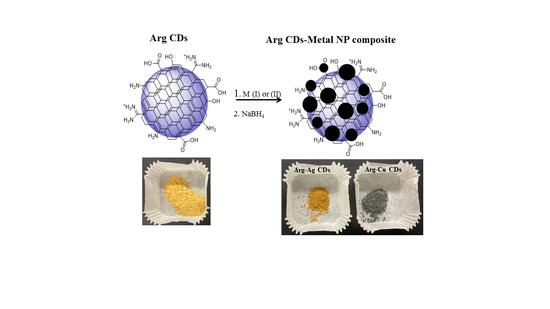