The efficient removal of pollutants from different environments has been one of the great challenges for scientists in recent years. However, the understanding of the mechanisms underlying this phenomenon is still the subject of passionate debates, mainly due to the lack of experimental tools capable of detecting events at the atomic scale. Herein, a comparative theoretical study was carried out to capture the adsorption of H2S on metal oxide surfaces such as zinc oxide (ZnO) and beryllium oxide (BeO), as well as graphene and Ni-decorated graphene. A simulation based on density-functional theory (DFT) was carried out by adopting General Gradient Approximation (GGA) under the Perdew–Burke–Ernzerhof (PBE) function. The calculations quantified H2S adsorption on the considered metal oxide sheets as well as on the non-decorated graphene having a physical nature. In contrast, H2S adsorbed on Ni-decorated graphene sheet gave an adsorption energy of −1.64 eV due to the interaction of S and Ni atoms through the formation of a covalent bond, proof of chemisorption. It seems that the graphene sheet decorated with Ni atoms is a more suitable adsorbent for H2S molecules than BeO, ZnO, or non-decorated graphene, providing a theoretical basis for future studies. View Full-Text
Keywords: H2S adsorption; metal oxide; graphene-like structures; Ni-decorated graphene; DFT H2S adsorption; metal oxide; graphene-like structures; Ni-decorated graphene; DFT
►▼ Show Figures 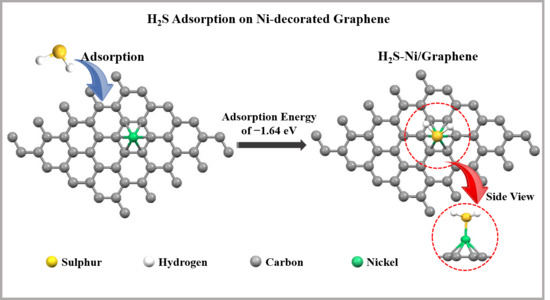