When two periodic two-dimensional structures are superposed, any mismatch rotation angle between the layers generates a Moiré pattern superlattice, whose size depends on the twisting angle . If the layers are composed by different materials, this effect is also dependent on the lattice parameters of each layer. Moiré superlattices are commonly observed in bilayer graphene, where the mismatch angle between layers can be produced by growing twisted bilayer graphene (TBG) samples by CVD or folding the monolayer back upon itself. In TBG, it was shown that the coupling between the Dirac cones of the two layers gives rise to van Hove singularities (vHs) in the density of electronic states, whose energies vary with . The understanding of the behavior of electrons and their interactions with phonons in atomically thin heterostructures is crucial for the engineering of novel 2D devices. Raman spectroscopy has been often used to characterize twisted bilayer graphene and graphene heterostructures. Here, we review the main important effects in the Raman spectra of TBG discussing firstly the appearance of new peaks in the spectra associated with phonons with wavevectors within the interior of the Brillouin zone of graphene corresponding to the reciprocal unit vectors of the Moiré superlattice, and that are folded to the center of the reduced Brillouin Zone (BZ) becoming Raman active. Another important effect is the giant enhancement of G band intensity of TBG that occurs only in a narrow range of laser excitation energies and for a given twisting angle. Results show that the vHs in the density of states is not only related to the folding of the commensurate BZ, but mainly associated with the Moiré pattern that does not necessarily have a translational symmetry. Finally, we show that there are two different resonance mechanisms that activate the appearance of the extra peaks: the intralayer and interlayer electron–phonon processes, involving electrons of the same layer or from different layers, respectively. Both effects are observed for twisted bilayer graphene, but Raman spectroscopy can also be used to probe the intralayer process in any kind of graphene-based heterostructure, like in the graphene/h-BN junctions. View Full-Text
Keywords: Raman; graphene; twist; heterostructure; carbon Raman; graphene; twist; heterostructure; carbon
►▼ Show Figures 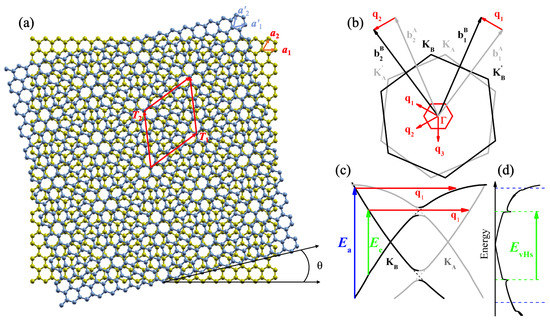