Glioblastoma multiforme (GBM) is the most aggressive brain cancer. We previously demonstrated the effect of biocompatible surface functionalized graphene quantum dots (GQDs) on GBM cells as chemotherapy enhancers in combination with the antitumor drug doxorubicin (Dox). However, traditional two-dimensional cultures could not represent a reliable model of tumor behavior. In this work, we investigated the effect of carboxylated (COOH-GQDs), aminated (NH2-GQDs) and unfunctionalized GQDs on a three-dimensional model of neurospheres. Neurospheres are clusters of GBM cells, which formation is driven by the presence of a stem subpopulation involved in cancer malignancy. Tumor recurrence after surgical resection, chemotherapy and radiotherapy indeed depends on the presence of cancer cells with stem properties. We measured a significant reduction in number and size of neurospheres after two weeks of monitoring in the presence of COOH-GQDs and GQDs. Previous works pointed out how variations of membrane fluidity could affect membrane stability and cell-to-cell interactions, thus influencing cell clustering. Therefore, we measured changes in membrane fluidity after administration of GQDs. We found that COOH-GQDs and GQDs significantly increased membrane fluidity with respect to the treatment with NH2-GQDs or compared to untreated cells. Shifts in the phase of phospholipid bilayer were in accordance with the negative surface net charge of GQDs. We depicted a strong correlation between negatively charged GQDs-induced increase in membrane fluidity and the downregulation of neurospheres formation. Our results indicate that COOH-GQDs and GQDs significantly modulate tumor malignancy by increasing fluidity of cell membrane, with a consequent inhibition of cell-to-cell interaction. View Full-Text
Keywords: glioblastoma; graphene quantum dots; neurospheres; nanomedicine glioblastoma; graphene quantum dots; neurospheres; nanomedicine
►▼ Show Figures 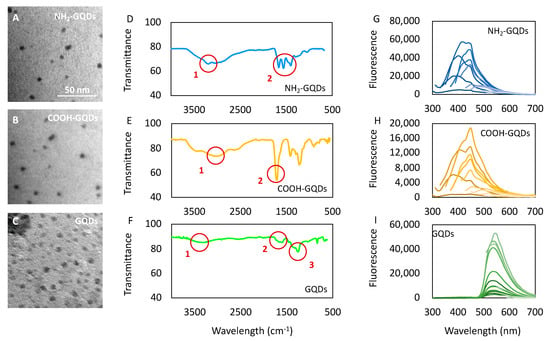