Impact of Nitrogen, Boron and Phosphorus Impurities on the Electronic Structure of Diamond Probed by X-ray Spectroscopies

sp2 Nanocarbons such as fullerenes, carbon nanotubes, and graphene molecules are not only open-shell species, but spatially extended, due to which their chemistry is quite specific. Cogently revealed dependence of the final products composition on size and shape of the carbons in use as well as on the chemical prehistory is accumulated in a particular property—the stabilization of the species’ radical efficiency, thus providing the matter of stable radicals. If the feature is highly restricted and rarely available in ordinary chemistry, in the case of sp2 nanocarbons it is just an ordinary event providing, say, tons-in-mass stable radicals when either producing such widely used technological products as carbon black or dealing with deposits of natural sp2 carbons such as anthracite, shungite carbon, and other. Suggested in the paper is the consideration of stable radicals of sp2 nanocarbons from the standpoint of spin-delocalized topochemistry. Characterized in terms of the total and atomically partitioned number of effectively unpaired electrons as well as of the distribution of the latter over carbon atoms and described by selectively determined barriers of different reactions exhibiting topological essence of intermolecular interaction, sp2 nanocarbons reveal a peculiar topokinetics that lays the foundation of the stability of their radical properties. View Full-Text
Keywords: stable radicals; fullerenes; carbon nanotubes; graphene molecules; spin chemistry; topokinetics stable radicals; fullerenes; carbon nanotubes; graphene molecules; spin chemistry; topokinetics
►▼ Show Figures 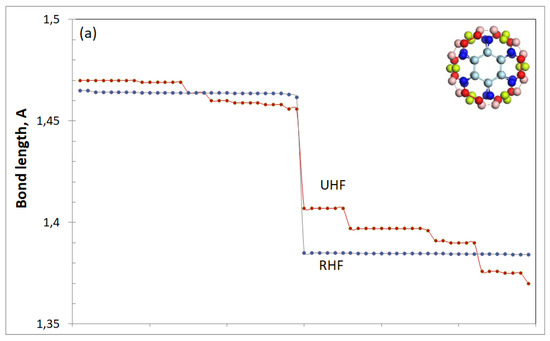