Lactiplantibacillus plantarum strain UNQLp 11 is a lactic acid bacterium with the potential to carry out malolactic fermentation (MLF) in red wines. Recently, the complete genome of UNQLp 11 was sequenced and this strain possesses four loci of the enzyme β-glucosidase. In order to demonstrate that these glucosidase enzymes could be functional under harsh wine conditions, we evaluated the hydrolysis of p-nitrophenyl-β-D-glucopyranoside (p-NPG) in synthetic wine with different ethanol contents (0%, 12%, and 14% v/v) and at different pH values (3.2, 3.5, and 3.8). Then, the hydrolysis of precursor n-octyl β-D-glucopyranoside was analyzed in sterile Pinot Noir wine (containing 14.5% v/v of ethanol, at different pH values) by headspace sorptive extraction gas chromatography-mass spectrometry (HSSE-GC/MS). The hydrolysis of p-NPG showed that β-glucosidase activity is very susceptible to low pH but induced in the presence of high ethanol content. Furthermore, UNQLp 11 was able to release the glycosilated precursor n-octyl, during MLF to a greater extent than a commercial enzyme. In conclusion, UNQLp 11 could improve the aromatic profile of the wine by the release of volatile precursors during MLF. View Full-Text
Keywords: Lb. plantarum; malolactic fermentation; β-glucosidase activity; wine; flavor Lb. plantarum; malolactic fermentation; β-glucosidase activity; wine; flavor
►▼ Show Figures 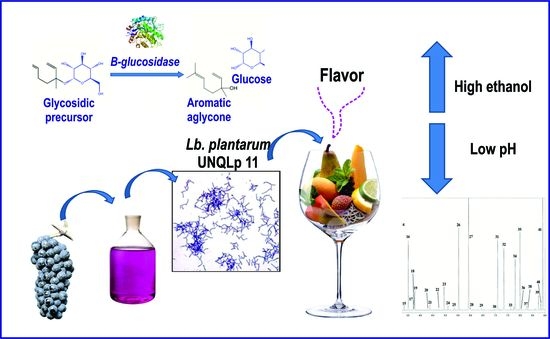