The purpose of this study was to explore the possibility of replacing an expensive yeast extract contained in the fermentation medium for D-lactic acid (D-LA, R-lactic acid) biosynthesis with an alternative nitrogen source. The screening studies were conducted under stationary conditions and showed that pea seed hydrolysate was the most beneficial substrate in the process of D-LA biosynthesis by the strain Sporolactobacillus laevolacticus DSM 442 among the used inorganic and organic nitrogen sources, waste materials, food and agricultural products. After 96 h, 75.5 g/L D-LA was obtained in batch cultures in a medium containing pea seed hydrolysate, with an average productivity of 0.79 g/L/h, yield of 75.5%, and optical purity of 99.4%. In batch cultures fed once, in a medium with an analogous composition, 122.6 g/L D-LA was obtained after 120 h, and the average yield, productivity and optical purity were 87.6%, 1.021 g/L/h, and 99.6%, respectively. Moreover, the amount of D-LA obtained in the fermentation medium enriched with the above-mentioned cheap agricultural product was similar to the amounts obtained in the medium containing yeast extract in both stationary and bioreactor cultures. Our research shows that hydrolyzed pea seeds, which belong to the legume family, may be a promising nitrogen source for the production of D-LA on an industrial scale. View Full-Text
Keywords: D-lactic acid; biosynthesis; Sporolactobacillus laevolacticus DSM 442; nitrogen source; agricultural products D-lactic acid; biosynthesis; Sporolactobacillus laevolacticus DSM 442; nitrogen source; agricultural products
►▼ Show Figures 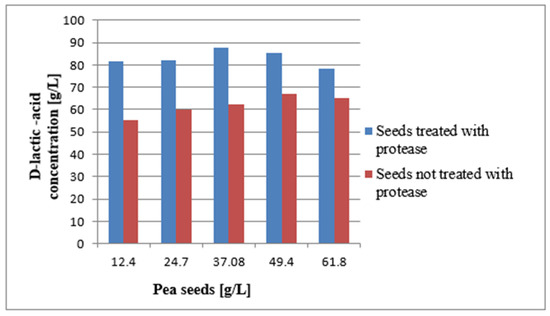