The demand for gluten-free breads has increased in the last years, but important quality and nutritional challenges remain unsolved. This research evaluated the addition of quinoa in whole quinoa grain flour, germinated quinoa flour, and quinoa sourdough, as a functional ingredient in the formulation of a rice flour-based bread. Twenty percent (w/w) of the rice flour was replaced with quinoa flour alternatives in bread formulations. The chemical composition, shelf-life, and sensory attributes of the rice-quinoa breads were analyzed. The addition of quinoa in sourdough resulted in breads with a significantly improved protein content at 9.82%, relative to 2.70% in the control breads. The amino acid content in quinoa sourdough breads also was also 5.2, 4.4, 2.6, 3.0, and 2.1 times higher in arginine, glutamic acid, leucine, lysine, and phenylalanine, respectively, relative to control breads with rice flour only. The addition of quinoa sourdough in rice breads also improved the texture, color, and shelf-life (up to 6 days), and thus they became moderately accepted among consumers. Although the germinated quinoa flour addition also resulted in a higher protein (9.77%) and amino acid content, they had a reduced shelf-life (4 days). Similarly, the addition of quinoa flour resulted in a higher protein content (9.61%), but the breads had poor texture attributes and were the least preferred by the consumers. View Full-Text
Keywords: gluten-free; bread; quinoa; sourdough; malting; germination; Pediococcus penstosaceus gluten-free; bread; quinoa; sourdough; malting; germination; Pediococcus penstosaceus
►▼ Show Figures 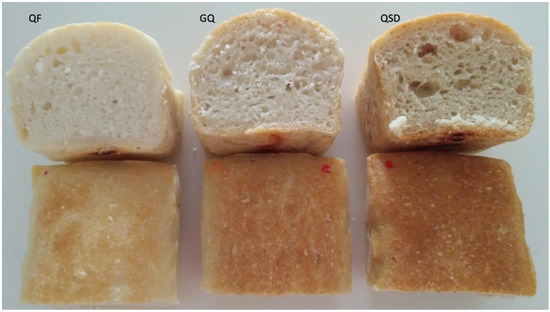