Aspects of In Vitro Plant Tissue Culture and Breeding of Asparagus: A Review

Zanthoxylum, belonging to the Rutaceae family, is widely distributed in tropical and subtropical regions. The genus has high economic value as spices, oils, medicinal plants, and culinary applications. Zanthoxylum has a long history of domestication and cultivation in China. However, the phylogenetic relationships and origin of wild and cultivated Zanthoxylum species in China remain largely unknown. Moreover, there is still no clear molecular phylogenetic system for Zanthoxylum species. Herein, 373 Zanthoxylum samples were collected from all presently known provenances of Zanthoxylum in China. In this study, four chloroplast DNA (cpDNA) markers (matK, ndhH, psbB, rbcL) were used to comprehensively analyze the genetic diversity, relatedness, and geographical origin of Chinese Zanthoxylum species. The results were as follows: (1) The aligned length of the four pairs of cpDNA sequences was 3836 bp, and 68 haplotypes were identified according to 219 variable polymorphic sites, including 90 singleton variable sites, 129 parsimony informative sites, 3 Indels (insertions and deletions). (2) Phylogenetic tree and haplotype network strongly supported the division of Zanthoxylum species consistent with the taxonomic recognition of five species: Z. bungeanum, Z. piasezkii, Z. piperitum, Z. armatum, and Z. micranthum. (3) Divergence time estimation suggested that Zanthoxylum genus originated from the Late Eocene, and most Zanthoxylum species diverged after the Middle Miocene. (4) Haplotype 16 (H16) was at the bottom of the phylogenetic tree, had higher haplotype diversity (Hd) and nucleotide polymorphism (Pi) than other haplotypes, and was located in the center of the network figure. Therefore, we deduced that the cultivated Zanthoxylum species may originate in Zhouqu County, Gansu Province, China. Meanwhile, our research provided a scientific basis for the identification and breeding programs of Chinese Zanthoxylum species. View Full-Text
Keywords: Zanthoxylum; cpDNA; genetic diversity; phylogenetic relationships; geographical origin Zanthoxylum; cpDNA; genetic diversity; phylogenetic relationships; geographical origin
►▼ Show Figures 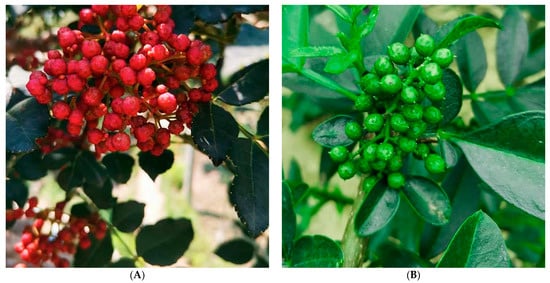