Ambrosia™ is an apple that naturally has limited post-harvest quality retention, which is accompanied by relatively low dry-matter content (DMC). This trial was proposed to improve the DMC of this apple by scheduling deficit irrigation (DI) conducted in a semi-arid orchard in the Similkameen Valley (British Columbia, Canada) in 2018 and 2019. Two irrigation regimes were implemented in the orchard: commercial irrigation (CI) and DI, which was defined as irrigation for 2/5 of the timespan of CI. Five irrigation treatments were conducted: 1—adequate irrigation (AI), which used CI for the whole season; 2—early-summer DI (ED), which used DI from 20 June to 20 July; 3—middle-summer DI (MD), which used DI from 20 July to 20 August; 4—late-summer DI (LD), which used DI from 20 August to 10 days before harvest; and 5—double-period DI (DD), which covered the interval of MD and LD. The DI treatments resulted in a significant decrease from AI −1.0 to −1.5 MPa in stem water potential (SWP), followed by subsequent recovery. Conversely, SWP did not recover, and instead reached a critical low of −2.5 MPa under continued deficit conditions (DD). This, in turn, correlated with significant differences in the DMC among the treatments. Specifically, ED resulted in a rapid and sustained increase in DMC throughout the summer. At the time of harvest, ED resulted in a five-fold increase in the proportion of fruit, with greater than 16% DMC and 15% DMC in 2018 and 2019, respectively, compared to AI. DD resulted in similar levels of DMC elevation compared to ED, but also caused irregular maturation and the increased incidence of soft scald disorder in the post-harvest period. MD and LD had variable effects on DMC, and also increased the incidence of soft scald disorder. Consequently, fruit collected from the ED resulted in the best blush color attributes, higher soluble solid content, and a significant improvement in the post-harvest retention of both fruit firmness and acidity. The ED irrigation model would be recommended as a practical way for Ambrosia™ growers in semi-arid regions to decrease water usage, and to ensure high fruit quality for superior marketing and sustainable production. View Full-Text
Keywords: deficit irrigation; water stress; dry matter content; soft scald; quality retention deficit irrigation; water stress; dry matter content; soft scald; quality retention
►▼ Show Figures 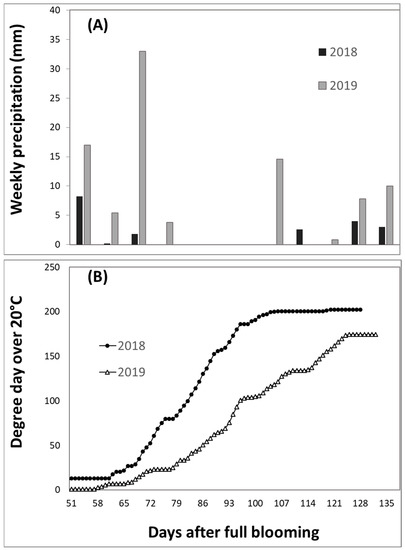