Adrenoleukodystrophy Newborn Screening in California Since 2016: Programmatic Outcomes and Follow-Up
Next Article in Special Issue

Re-Evaluation of the Prevalence of Permanent Congenital Hypothyroidism in Niigata, Japan: A Retrospective Study
Previous Article in Journal

Japanese newborn screening (NBS) for phenylketonuria (PKU) was initiated in 1977. We surveyed the neurological outcomes of Japanese adult patients with PKU to investigate the long-term effects and of and issues with NBS. Eighty-five patients with PKU aged over 19 years who continued to be treated with a phenylalanine-free amino acid formula were investigated by administering questionnaires regarding clinical characteristics, such as mental ability, education status, and therapeutic condition. Of the 85 subjects, 68 patients were detected by NBS (NBS group), while the other 17 were clinically diagnosed before the initiation of NBS (pre-NBS group). Further, 10 of the 68 NBS patients presented intellectual and/or psychiatric disabilities, 5 of whom had a history of treatment discontinuation; in contrast, 12 of the 17 pre-NBS patients presented with neuropsychiatric symptoms. Regarding social outcomes, almost all patients in the NBS group could live an independent life, while over half of the patients in the pre-NBS group were not employed or lived in nursing-care facilities. Neurological outcomes are obviously improved by NBS in Japan. However, some patients, even those detected by NBS, developed neuropsychiatric symptoms due to treatment disruption. Lifelong and strict management is essential to maintain good neurological and social prognoses for patients with PKU.
Keywords: phenylketonuria; newborn screening; long-term outcome; adult patients; Japanese; intellectual disability; psychiatric disability; treatment discontinuation phenylketonuria; newborn screening; long-term outcome; adult patients; Japanese; intellectual disability; psychiatric disability; treatment discontinuation

Phenylketonuria (PKU, OMIM No. 261600), an autosomal recessive inherited disease of amino acid metabolism, is a major disease identified by newborn screening (NBS) [1]. Classic PKU is caused by phenylalanine hydroxylase (PAH, OMIM No. 612349) deficiency and is associated with severe intellectual disability, convulsions, hypopigmentation, behavioral abnormalities, and dementia. Because PKU is detected as an elevation in phenylalanine (Phe) levels in NBS, mild hyperphenylalaninemia (HPA), tetrahydrobiopterin (BH4) deficiency, including BH4 metabolic defects, and BH4-responsive PKU and classic PKU are all detectable. Mild HPA is also caused by a defect in PAH but is clinically mild and may require less strict dietary restrictions. BH4-responsive PKU and BH4 deficiency show BH4 responsiveness. The global prevalence of PKU has been reported to be approximately 1 in 4000 to 15,000 births [1,2,3], but the incidence of NBS in Japan has been reported to be 1 in 50,000 to 70,000 births [4,5].
NBS for PKU first spread from the mid to late 1960s in North America and the United Kingdom, while nationwide NBS for PKU was initiated in 1977 in Japan. Almost all cases of PKU are detected by NBS and treated immediately after birth. The treatment is mainly a diet with protein restriction and Phe-free formula and supplementation with BH4 in some cases. With this therapy, the life and neurological prognoses of patients with PKU have been reported to improve, at least in childhood, resulting in a significantly decreased societal economic burden [6,7]. Therefore, PKU is considered one of the best targets for NBS in terms of a cost–benefit analysis.
However, even in patients who are initially treated and achieve good metabolic control, reversible (and sometimes irreversible) neuropsychiatric symptoms can develop if this control is lost in later childhood or adulthood [8]. In addition, over time, some patients may manifest subtle intellectual and neuropsychiatric issues even with strict adherence to a low-Phe diet [9,10,11,12]. In fact, the long-term outcome of PKU is not necessarily favorable.
In this study, we expanded upon our previous studies [5,13,14] and investigated the social and neurological outcomes of adult patients aged over 20 years who were diagnosed with PKU before and after NBS in Japan using a questionnaire administered to attending doctors.

We sent questionnaires to the 33 attending physicians of 85 adult patients with PKU aged over 20 years as of October 2016 (born before 1996) who had continuously required a special formula (including Phe-free comprehensive amino acid powder and low-Phe peptide powder) supplied by the Secretariat of Special Formula, Aiiku Maternal and Child Health Center for dietary therapy.
Attending physicians answered the questionnaires based on clinical records. The questionnaire included questions on sex, age, clinical form of PKU, history of treatment interruption and the reason, follow-up department, physical development, neuropsychiatric disability, educational status, work status, and marital status and allowed for an open-ended description of the patient.
Regarding the question on neuropsychiatric disability, attending physicians were able to answer “normal intelligence”, “borderline intellectual disability”, “intellectual disability”, and/or “psychiatric disability”. When “intellectual disability” was selected, patients with an IQ (intelligence quotient) less than 50 or patients living in nursing-care facilities were characterized as having a “moderate-severe intellectual disability”, while those with an IQ of 50–70 or who are able to fend for themselves and patients with borderline intellectual disability were characterized as having a “borderline-mild intellectual disability”. Additionally, the details of psychiatric disability were judged based on the open-ended description. Regarding physical development, short stature was defined as a height <160 cm for males and <148 cm for females. Obesity and leanness were defined as BMI >25 and <18.5 kg/m2, respectively.
The subjects were divided into the following two groups: (1) the NBS group was defined as patients who underwent NBS, and (2) the pre-NBS group consisted of patients who were born before 1977 (when NBS was initiated) or were born after 1977 but did not receive NBS. Each of the groups was subdivided into age groups of approximately 5 years. The results of the NBS and pre-NBS groups were compared without a statistical analysis because of the small-scale nature of this study.
This study was approved by the Institutional Review Board of Shimane University on 13 October 2016 (#20160915-2).

The long-term outcomes of adult patients with PKU detected by NBS were much more favorable than those of patients in the pre-NBS group in Japan, as previously reported in other countries. However, some patients, even those who underwent early detection using NBS, with histories of treatment intermittence suffered from neuropsychiatric symptoms. Lifelong and strict management is essential to maintain a good prognosis for patients with PKU.

The study was conducted according to the guidelines of the Declaration of Helsinki, and approved by the Institutional Review Board of Shimane University on 13 October 2016 (protocol code #20160915-2 and date of approval).

Patient consent was waived because this study is retrospective based on already-existing data using questionnaire for attending doctor and because it is difficult to obtain informed consent of some patients due to not visiting the hospital within the research period. However, this study concept and implementation are widely announced on our university website 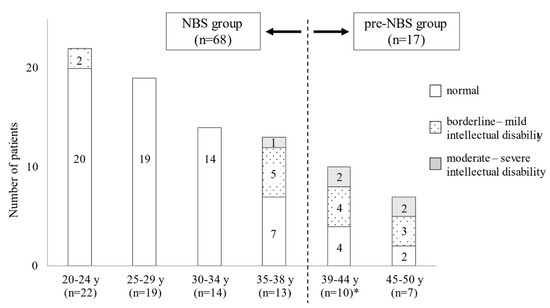 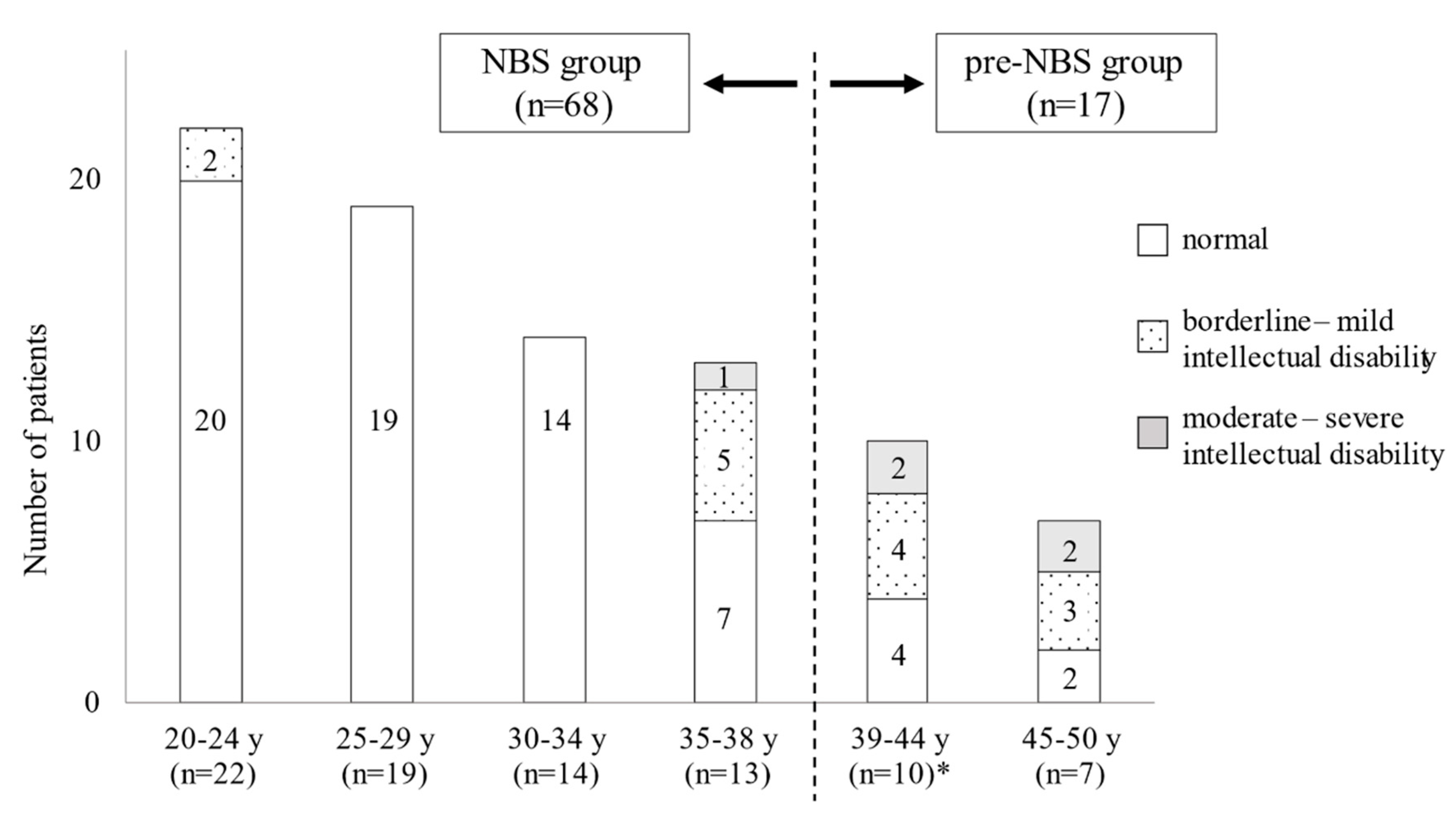 Table 3. Comparison of clinical and social parameters.
Table 3. Comparison of clinical and social parameters.
Short stature was defined as a height <160 cm for males and <148 cm for females. Obesity and leanness were defined as BMI >25 and <18.5, respectively. *, A 37-year-old female is included in the group of “39–44 years old” because she did not undergo NBS. #, Graduation from “high school” includes five patients who are still in college.
© 2021 by the authors. Licensee MDPI, Basel, Switzerland. This article is an open access article distributed under the terms and conditions of the Creative Commons Attribution (CC BY) license (https://creativecommons.org/licenses/by/4.0/).
We use cookies on our website to ensure you get the best experience. Read more about our cookies here.
Accept
We have just recently launched a new version of our website. Help us to further improve by taking part in this short 5 minute survey here. here.
Never show this again