Detection Range of Acoustic Receivers in a Large Hydropower Reservoir

Acoustic telemetry manufacturers report estimated detection ranges under idealized conditions, but environmental conditions such as water depth, substrate type, and turbulence can affect the range of reliable detection. Range testing of low (Vemco V7 136 dB re 1µ[email protected]) and high power (V13 147 dB re 1µ[email protected]) acoustic transmitters (tags) was performed near a hydropower generating station and its associated reservoir using both active (mobile; VR100) and passive (stationary; VR2W/VR2Tx) receivers. Low power tags are typically used to track small fish such as juvenile Atlantic salmon (Salmo salar), whereas high power tags are typically used to track larger fish such as adult salmon. The results found herein were applied to concurrent salmon telemetry studies. Detection ranges of the low power tags were within 246–351 ± 20–70 m (mean ± SE), and the high power tags were within 537–1106 ± 53–272 m. Observed detection ranges were comparable or higher to manufacturer estimates for both tag types being detected by passive receivers, and were lower than expected for both tag types being detected by active receivers. Passive receivers were further tested by mooring a fixed sentinel tag (low power) on a receiver line at the hydropower site for 50 days. The sentinel tag detection range of 212 m was less than the expected range of 280–292 m, and was not found to be significantly impacted by wind speed. There was evidence of a hydropower effect on detection probability (up to 95% reduction) of both tag types for the active receiver, and detection ranges were significantly lower at the hydropower site than the reservoir site for the high power tag. The results of this study give insight to the initial design of acoustic telemetry studies beyond what can be gathered from manufacturer’s estimates, but rather near hydropower facilities and within large reservoirs; however, detection ranges reported herein do not replace the importance of range testing in site-specific conditions. View Full-Text
Keywords: telemetry; range test; hydropower; reservoir; lentic telemetry; range test; hydropower; reservoir; lentic
►▼ Show Figures 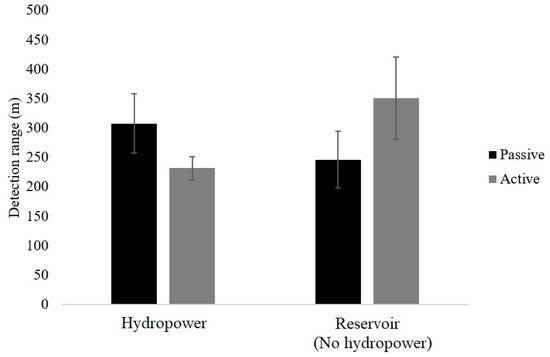