Survival, Growth, and Development in the Early Stages of the Tropical Gar Atractosteus tropicus: Developmental Critical Windows and the Influence of Temperature, Salinity, and Oxygen Availability
Next Article in Special Issue

Acknowledgment to Reviewers of Fishes in 2020

When multiple species of fish coexist there are a host of potential ways through which they may interact, yet there is often a strong focus on studies of single species without considering these interactions. For example, many studies of forestry–stream interactions in the Pacific Northwest have focused solely on the most prevalent species: Coastal cutthroat trout. To examine the potential for interactions of other fishes with coastal cutthroat trout, we conducted an analysis of 281 sites in low order streams located on Washington’s Olympic Peninsula and along the central Oregon coast. Coastal cutthroat trout and juvenile coho salmon were the most commonly found salmonid species within these streams and exhibited positive associations with each other for both presence and density. Steelhead were negatively associated with the presence of coastal cutthroat trout as well as with coho salmon and sculpins (Cottidae). Coastal cutthroat trout most frequently shared streams with juvenile coho salmon. For densities of these co-occurring species, associations between these two species were relatively weak compared to the strong influences of physical stream conditions (size and gradient), suggesting that physical conditions may have more of an influence on density than species interactions. Collectively, our analysis, along with a review of findings from prior field and laboratory studies, suggests that the net effect of interactions between coastal cutthroat trout and coho salmon do not appear to inhibit their presence or densities in small streams along the Pacific Northwest.
Keywords: Cutthroat trout; coexistence; coho salmon; steelhead; presence; density; headwaters; stream gradient; stream size Cutthroat trout; coexistence; coho salmon; steelhead; presence; density; headwaters; stream gradient; stream size

Many studies of stream fishes involve consideration of just a single species or just a small fraction of the total species assemblage, though it is well-known that interactions within these assemblages can be important [1,2]. A case in point is the host of studies involving influences of forestry on streams and fishes in the Pacific Northwest, USA. In this region, highly valued salmonids are the focus of much policy and research to understand how they are influenced by land management practices [3,4]. With respect to the question of forestry and fish [5,6,7], the salmonid most often considered is the coastal cutthroat trout (Oncorhynchus clarkii clarkii). This is likely because, among Pacific Northwest salmonids, coastal cutthroat trout predominates in smaller streams [8,9] and such streams comprise a vast majority of the length of streams [10].
Although coastal cutthroat trout are more prevalent in smaller streams in the Pacific Northwest, they share these habitats with a host of other species, including congeneric salmonids, especially steelhead (O. mykiss), Chinook salmon (O. tshawytscha), and coho salmon (O. kisutch), as well as sculpins (Cottus, sp.), which are often numerically dominant when present [9]. These species can interact ecologically in numerous ways throughout the life cycle, and in the case of steelhead, hybridization is also a possible interaction [11]. Given the number of interactions that are possible among these species, it is impossible to fully consider them in any single analysis. Furthermore, interactions may be dependent on abiotic interaction modifiers [12], lending additional complexity to the problem. In this study, we take initial steps to evaluate the importance of co-occurring fishes in Pacific Northwest streams to address the presence and density of coastal cutthroat trout. Our intent is not to delve deeply into single or multiple sets of processes explaining species coexistence, but rather to evaluate associations as a first approximation of the net effect of these processes on realized occurrence and density of coastal cutthroat trout.
To evaluate associations between coastal cutthroat trout with other fish species we used observations of species presence and fish density (fish/m2) collected in low-order (4th order or smaller) streams draining coastal forests of the Pacific Northwest USA. We began by quantifying patterns of co-occurrence and prevalence in relation to major environmental gradients. Following this analysis, we evaluated associations between the density of coastal cutthroat trout and coho salmon (the most commonly found salmonids) in more detail, also considering the influences of stream size, stream gradient, and body size of coastal cutthroat trout as covariates in linear models to predict density of both species. Collectively, the results of this work provide insights into how net outcomes from a host of potential interactions and resource selection by these two species result in complementary (allotopic) distributions or density within streams.

Spatially segregation or negative pairwise associations of densities of species can potentially signify a host of ecological interactions. Given the number and complexity of potential interactions involving species in this study, we did not expect to arrive at definitive conclusions regarding the specific processes behind patterns revealed herein. Furthermore, it is possible that patterns of presence or density of a given species may be more tied to environmental gradients than to interspecific interactions [13,14], and potentially context-specific interactions [12]. We included two major factors (stream gradient and wetted width) that are commonly associated with the distribution or density of salmonids, but these variables are also associated with a host of other physical processes that could be more directly driving density [15,16,17]. Below we discuss the potential implications of our findings with respect to the co-occurrence among species focusing on interactions with coastal cutthroat trout.

Although our ability to attribute patterns observed here to specific processes is limited, it is widely believed that strong biotic interactions can drive patterns of occurrence and density of vertebrates in small streams, for example fishes and amphibians that specialize in headwater stream habitats [8,18]. In the Pacific Northwest, common salmonid and cottid species are often found together in streams, and typically in a nested fashion, where species richness increases in a downstream direction without loss of headwater species, such as coastal cutthroat trout [9]. In spite of this pattern in our dataset, we found evidence of strong associations across all species of salmonids and sculpin (considered as a group, due to difficulty in identifying species) in lower gradient streams [19]. Interestingly, whereas sculpins, coastal cutthroat trout, and coho salmon were positively associated in terms of occurrence, all three of these species or groups were negatively associated with the presence of steelhead. Our findings are in agreement with Ptolemy [20], who reported that coastal cutthroat trout dominated in smaller streams whereas steelhead dominated in larger streams. Similarly, Rosenfeld et al. [21] found coastal cutthroat trout and coho salmon densities to be highest in smaller streams. Johnson et al. [22] also found lower numbers of steelhead in streams with coastal cutthroat trout and absent in streams with flows less than 0.06 m3/s.
Among the species considered herein, strong direct interactions may be expected to be more likely between steelhead and coastal cutthroat trout. These two species have more similar ecological characteristics (e.g., spring spawning, flexibility in expression of migratory life histories, and capacity to complete their life cycles in small streams), and can interact evolutionarily via hybridization, where there is potential for outbreeding depression [11]. Within the geographic extent we examined, it is possible that coastal cutthroat trout better adapted to live in low order streams [18], whereas steelhead (potentially due to their larger adult size [20]) are more likely to be present in larger streams: A pattern that is repeated within streams where only O. mykiss are present with resident individuals (usually referred to as rainbow trout) occupying headwaters and migratory forms (steelhead) in larger, downstream locations [8,23]. If some of the processes discussed here are in play, the complementary (allotropic) distribution of these two species can indirectly account for other species associations we detected (i.e., the consistent negative or positive association with coastal cutthroat trout and steelhead respectively).

Data associated with the SNF have been deposited with the USGS Forest and Rangeland Ecosystem Science Center: htt doi.org/10.5066/F71R6. Data from the OESF are not currently available online and are available on request from the corresponding author. The OESF data are not publicly available because our data sharing resources are currently under development with the goal to make all data publically available in the future.

Funding for this work was provided by Washington Department of Natural Resources, the U.S. Forest Service, and the U.S. Geological Survey. Nathan Chelgren supplied data from the Siuslaw National Forest. BJ Barham provided much needed inspiration during the tough times. Teodora Minkova and Allen Estep of Washington Department of Natural Resources provided managerial support. Reviews provided by Patrick Connolly greatly improved an earlier version of this manuscript. We would also like to thank two anonymous reviewers for their edits and suggestions. Any use of trade, firm, or product names is for descriptive purposes only and does not imply endorsement by the U.S. Government. 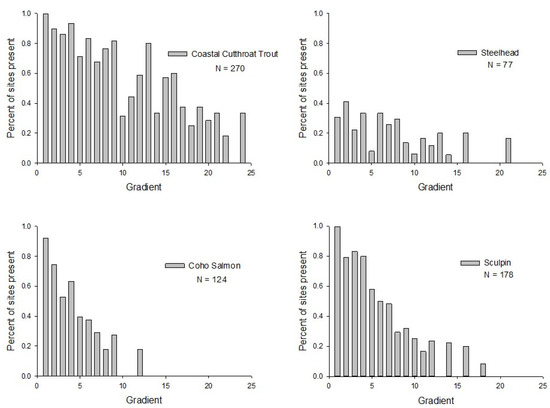 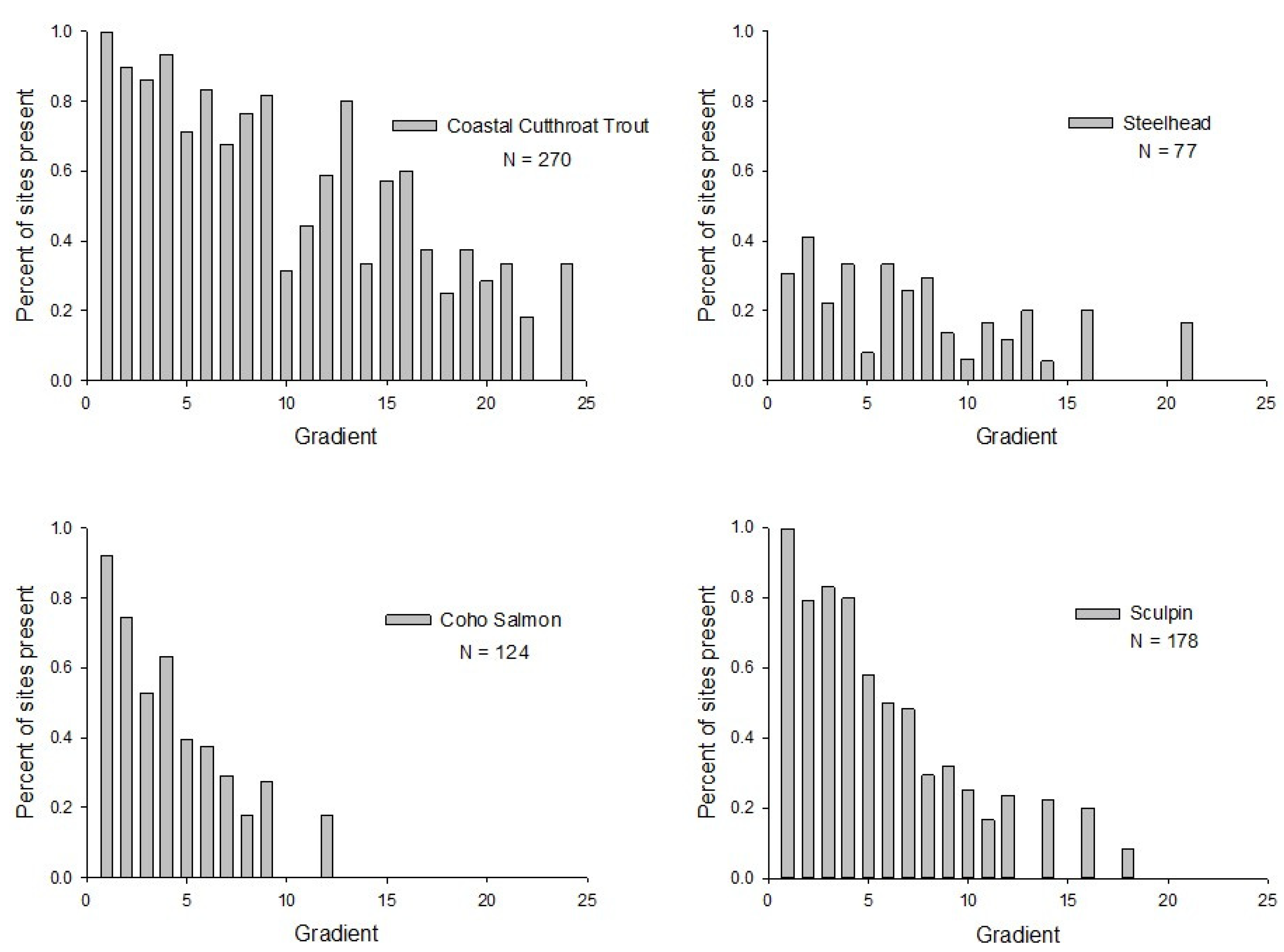 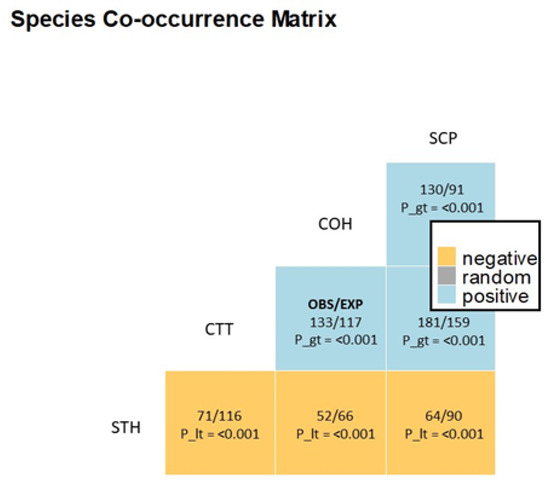 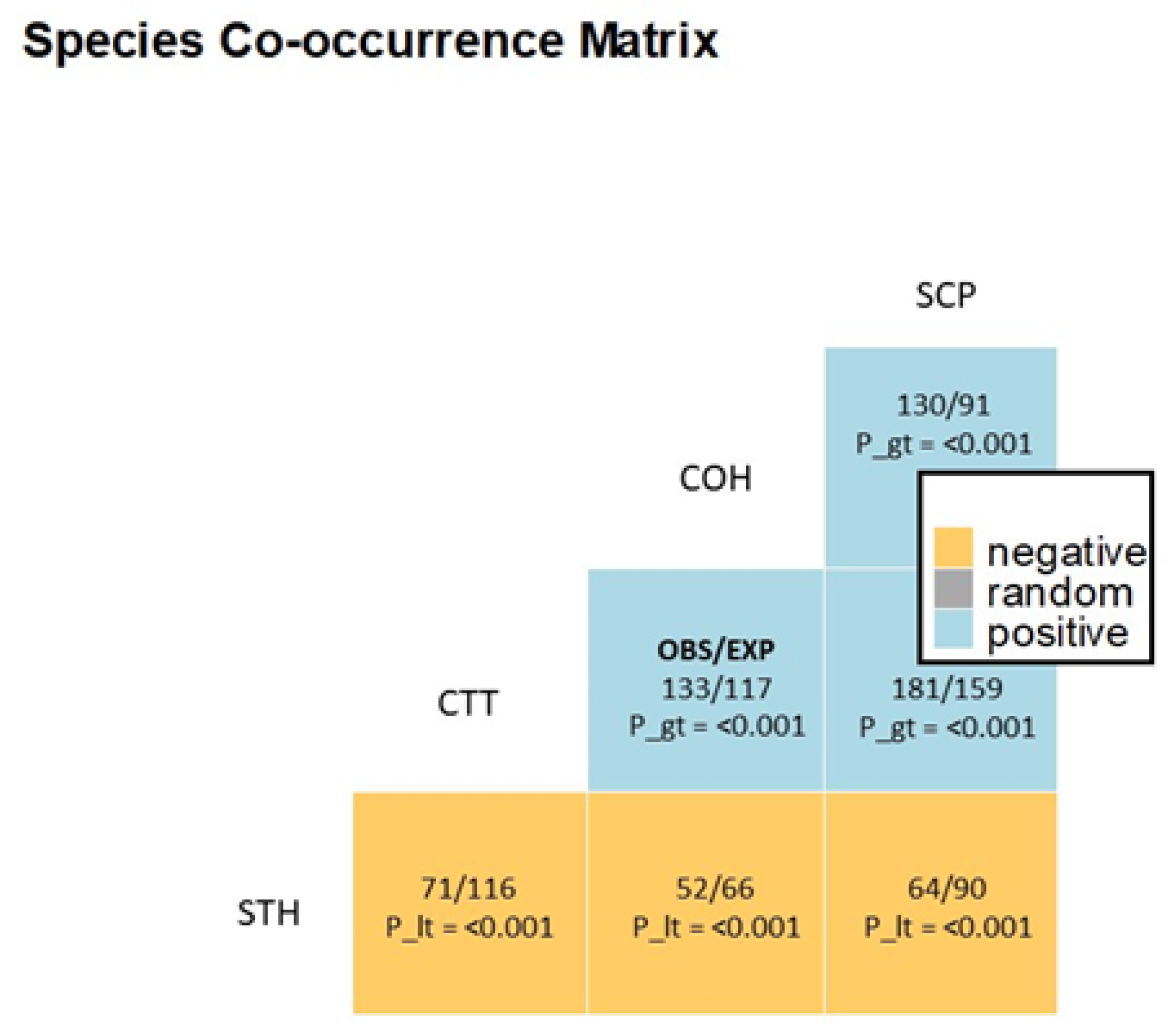 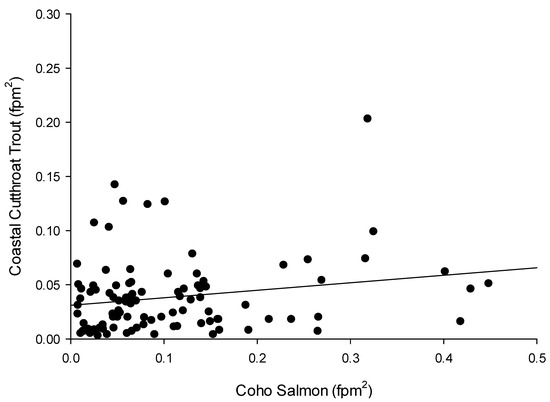 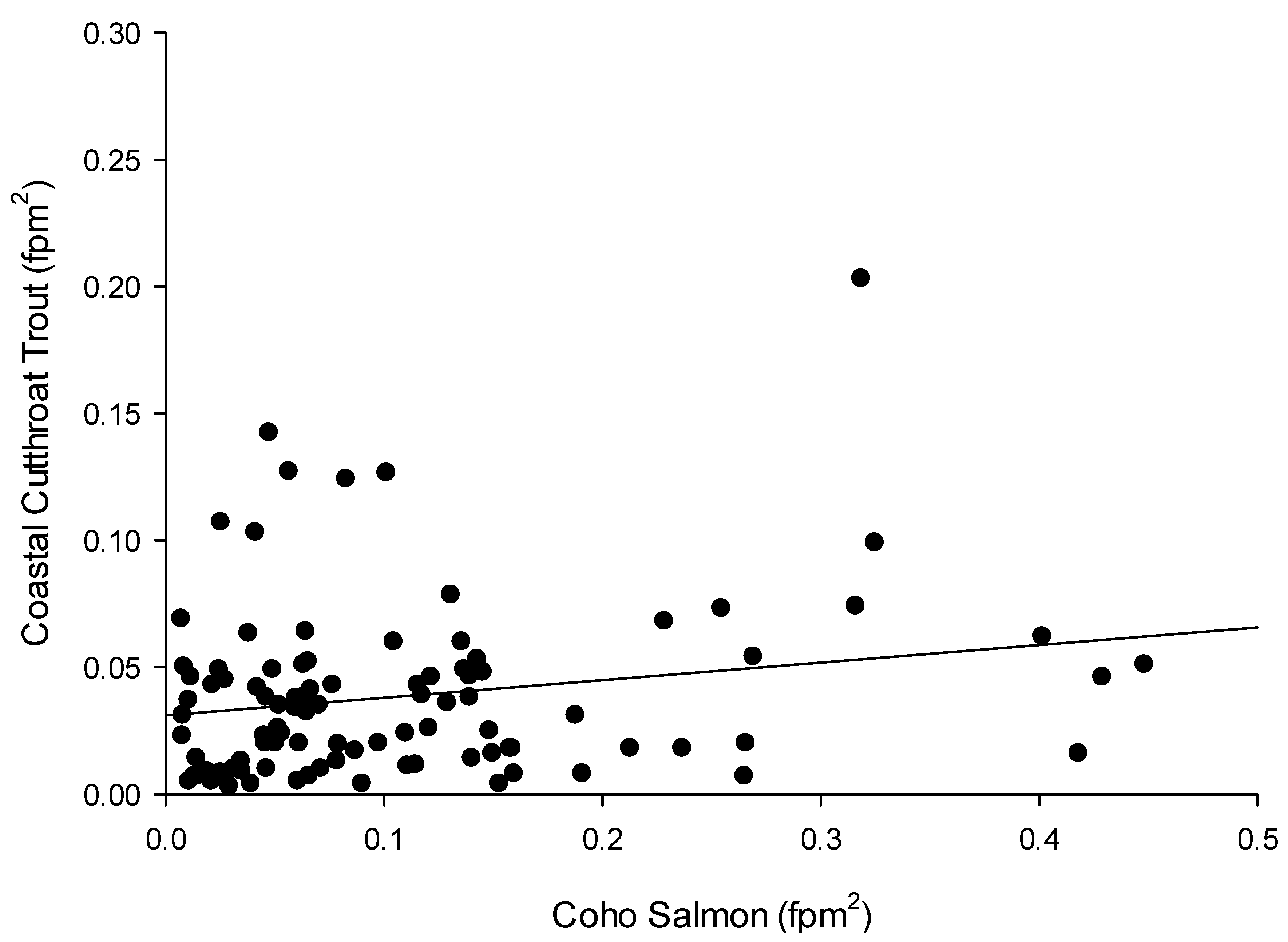 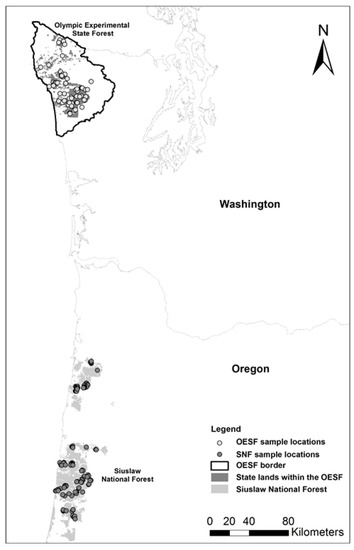 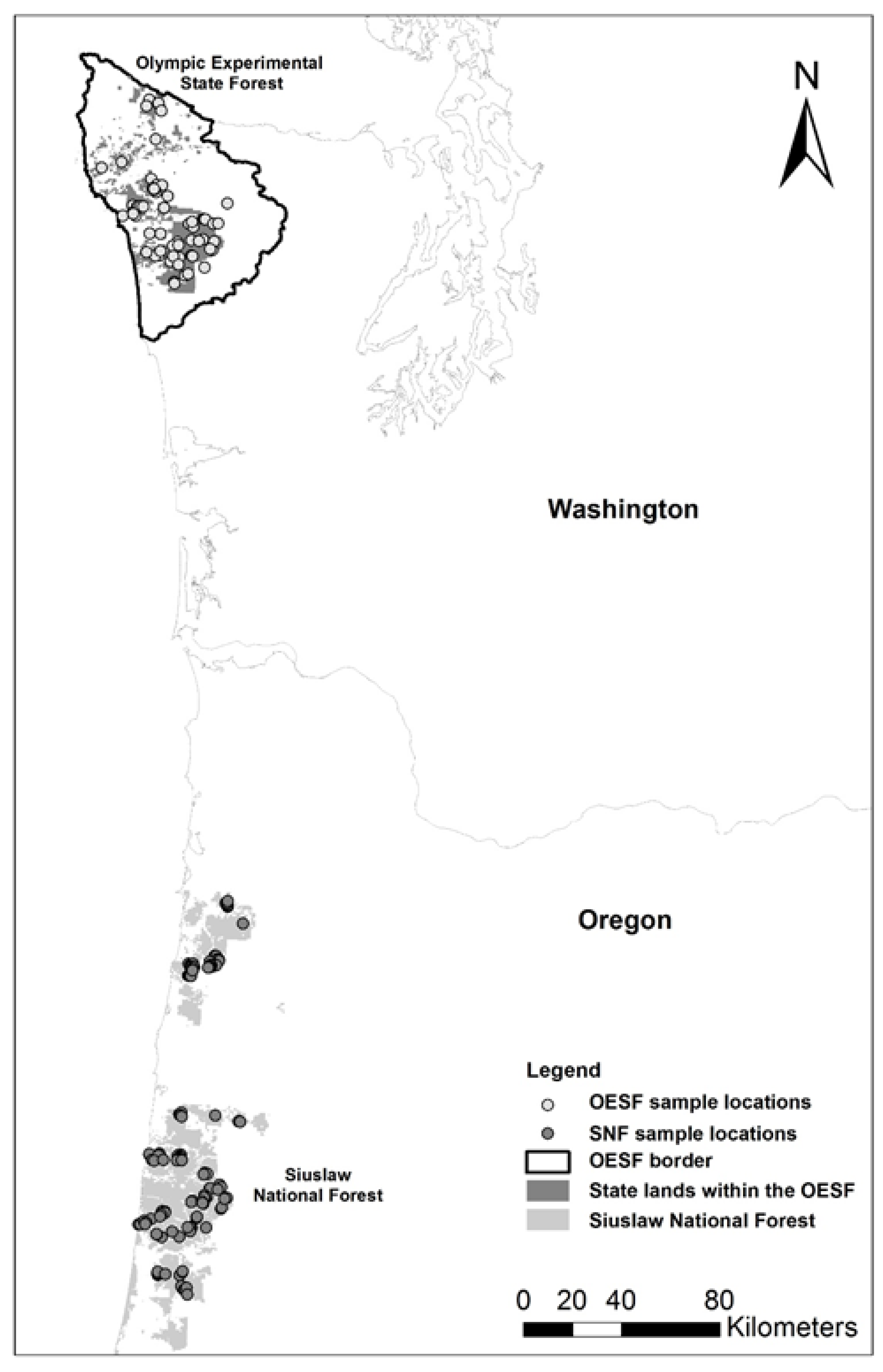