Survival, Growth, and Development in the Early Stages of the Tropical Gar Atractosteus tropicus: Developmental Critical Windows and the Influence of Temperature, Salinity, and Oxygen Availability
Previous Article in Special Issue

Eradication of the Invasive Common Carp, Cyprinus carpio from a Large Lake: Lessons and Insights from the Tasmanian Experience

Common carp (Cyprinus carpio, L. 1758) are the most abundant pest fish species in Australia, detrimental to ecosystem integrity and values, and in need of suitable management solutions. In January 1995, this destructive pest was discovered in two large, connected Tasmanian lakes—Lakes Crescent (23 km2) and Sorell (54 km2). After an initial assessment, carp were immediately contained to these waters using screens to prevent their escape down-stream, followed by swift legislation to enforce closure of the lakes to the public. Assessment and evaluation of carp numbers occurred throughout the eradication program, with effort focused on Lake Crescent. Beginning with undirected removal, techniques progressively evolved to more sophisticated targeted removal with assistance from biotelemetry, in conjunction with gill netting and electro-fishing. Real-time population estimates and in situ observations resulted in a detailed cumulative understanding of carp population dynamics, behaviour and seasonal habitat choice. This allowed strategic deployment of fences to block access to marshes, and the installation of steel traps within the fences. These gears specifically prevented spawning opportunities, while concurrently capturing mature fish. Following 12 years of adaptive and integrated effort, 7797 carp (fry, juvenile and adult) were captured from Lake Crescent, with the last carp being caught in December 2007. The subsequent 14 years of monitoring has not resulted in the capture of any carp, confirming the successful eradication of carp from Lake Crescent. These management practices have been successfully replicated in the larger Lake Sorell, where 41,499 carp (fry, juvenile and adult) have been removed. It is now estimated that there are few, if any carp remaining. Collectively, the techniques and strategies described here were reliable, and can be applied as a model to control or eradicate pest populations of carp in freshwater lakes elsewhere. View Full-Text
Keywords: common carp; invasive; incursion; alien fish; fyke net; pest fish; Lake Sorell; Lake Crescent; biotelemetry common carp; invasive; incursion; alien fish; fyke net; pest fish; Lake Sorell; Lake Crescent; biotelemetry
►▼ Show Figures 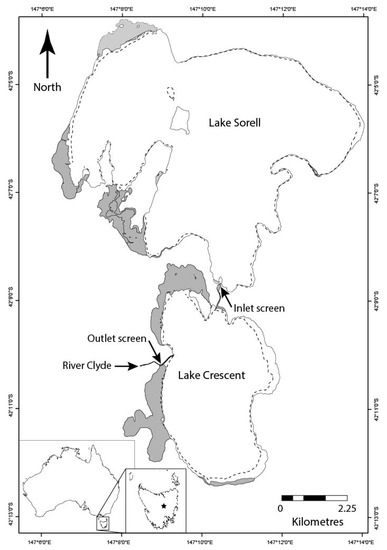