This article evaluates the relevant properties of cement-bonded particleboards (CBPB) made with a portion of maritime pine (Pinus pinaster) particles replaced with an agricultural waste, banana pseudostem (Musa sp.). The industrial production of CBPB was simulated in the laboratory based on a reference composition defined by a manufacturing company. Test specimens were produced assuming 0%, 25%, 50% and 75% partial replacement of wood particles with banana pseudostem fibres. Some physical properties (bulk density, thermal conductivity, and dimensional stability) and the mould susceptibility of the different variables were assessed. Results show that the thermal conductivity of the boards increased with the banana fibre proportion and ranged between 0.233 W/(m.K) and 0.279 W/(m.K). The bulk density values generally increased with the banana fibre proportion and ranged between 1754–1995 kg/m3, being the highest value obtained for B50 (equal weight proportion of wood particles and banana fibres). Specimens with a higher percentage of banana fibres have reduced thickness resulting from swelling, ranging between 0.38% and 0.11% (for 0% and 75% of banana fibres, respectively). CBPBs with unsanded surfaces seem to be unsusceptible to mould development, whereas those with sanded surfaces, simulating wearing, show some bio-susceptibility. Mould development increases with the proportion of banana fibre. The results highlight the need for regular maintenance of the particleboards, thus avoiding surface wear over time and resulting in the exposure of the wood particles and/or banana fibres to the outside environment. View Full-Text
Keywords: bio-wastes; banana pseudostem fibres; maritime pine particles; physical properties; mould susceptibility. bio-wastes; banana pseudostem fibres; maritime pine particles; physical properties; mould susceptibility.
►▼ Show Figures 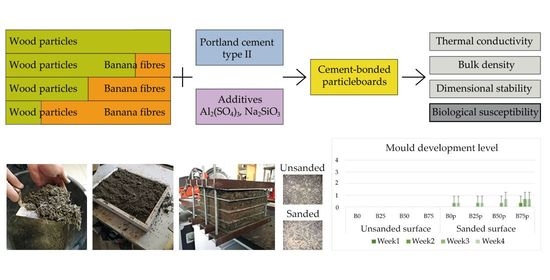